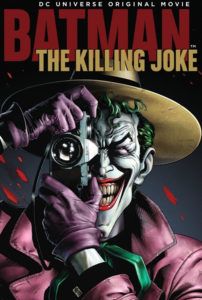 If Warner Home Video and Warner Bros. Animation ever had a tentpole release, Batman: The Killing Joke would be it. Based on the 1988 graphic novel of the same name, the 76-minute feature was given a small, R-rated theatrical release across the U.S., and it later debuted on various home video platforms. The adaptation was produced in part by Bruce Timm and Alan Burnett, masterminds of Batman: The Animated Series (1992-1995), as well as a small collection of other animated series and animated features based on DC Comics heroes. Unlike recent live action efforts (Man of Steel, Batman v Superman: Dawn of Justice), Warner’s animated output in the DC Universe has been mostly solid. After all, animated films have almost no limit to their scope onscreen, even on a smaller budget, nor do they feature miscast actors; whereas a live-action film is often hampered by factors that put boundaries on live-action. For example, Warner Home Video’s Green Lantern: First Flight animated film was far superior than the live-action version starring Ryan Reynolds.

At any rate, Batman: The Killing Joke was originally written by Alan Moore and illustrated by Brian Bolland, two creative minds who brought a unique vision to the two central characters: Batman and his archnemesis, the Joker. The book explored the dichotomy and similarities between the two characters, how both were created through incredible loss, and how essentially they were the same person, just on very different paths. It showed Batman’s most understanding and human side; it showed Joker’s human side as well, but also portrayed him at his most sadistic. For example, in the book, Joker shoots Barbara Gordon (aka Batgirl) and leaves her paralyzed from the waist down (she would eventually become Batman’s wheelchair-bound assistant, Oracle). Later, Joker kidnaps and strips down Jim Gordon, and then attempts to drive the Commissioner mad. These moments would become so iconic within the Batman mythology that they would continue to influence stories about Gotham City for decades.

Moore’s lean storytelling wasn’t long enough for a full-length feature, however. When writer Brian Azzarello set out to adapt the graphic novel, he took divisive liberties with the material. Azzarello seems to think The Killing Joke is about Batgirl, instead of the relationship between Batman and Joker. From the outset, the movie begins with a curiously long prologue about a sadistic criminal named Paris Franz (Maury Sterling). He’s a sociopath who becomes obsessed with Batgirl (Tara Strong). Batman (Kevin Conroy, who has voiced Batman for Warner since 1992) wants her to back down from this case, because she’s become a target. At the same time, Batgirl wants to explore a romance with her mentor; when her fantasies come true, it creates a complicated rift between them. Dealing with Franz takes up nearly 30 minutes of screentime, but it prompts Batman to visit Joker (Mark Hamill, also voicing his character since the beginning) in Arkham Asylum to talk things out, once and for all—except, Joker has already escaped.

While the first half feels like an extended prologue included as runtime padding, what follows isn’t much better, as it deviates from the source material, and worse, emphasizes what was unwieldy about the text. Of course, as usual with Warner’s DC Comic animated films, the voice cast of Batman: The Killing Joke is top-notch and the mostly hand-drawn animation intentionally meant to evoke Batman: The Animated Series. All around, the tech package is solid. It’s the storytelling that is the problem. Periodic flashbacks show us Joker’s pre-crime life, revealing he had a wife and child. When they are accidentally killed, he’s forced by Gotham gangsters into carrying out a crime. Eventually, Joker, whose real name is never divulged, is accidentally dropped into a vat of chemicals and made into the Clown Prince of Crime as we know him today. Knowing Joker’s backstory makes him human and, much like Michael Myers or any number of horrifying villains, he’s far more effective as a force of Nature than a three-dimensional character. The Joker’s finest representations remain those, like Batman: The Animated Series or The Dark Knight, that treat him as a nameless sociopath capable of committing any horrifying act for a laugh.

This brings us to the movie’s most-talked-about deviation. It not only depicts Joker shooting Barbara Gordon in the spine, but the filmmakers also suggest that he disrobes her, and then rapes and photographs her after she’s paralyzed—a horrifying turn, to be sure. It’s all the more disturbing when, in the final scene, Batman tries to make peace with Joker by appealing to his equally traumatized humanity. They seem to find some common ground when Joker tells a joke, and both men laugh hysterically at the punch line. It’s bad enough that Batman tries to appeal to Joker’s humanity after Barbara was paralyzed, as he does in the text. But the added crime of rape and sexual humiliation suggest a level of monstrosity that seems unforgivable, even for the Joker. What’s more, the text ends with the (arguable) implication that Batman kills Joker outside of the frame. There’s no such implication in the movie; the scene of Batman and Joker just fades to back, then the end credits. As these iconic characters laugh away, we can’t help but think of Barbara, freshly raped and hospitalized, and feel there’s nothing worth laughing about.

Indeed, the story feels outdated, since the sole female hero is turned into a victim and pawn, and the release feels like an obligatory promotional tool. Warner Bros. undoubtedly saw an opportunity to get audience in the “Batman mood” in advance of Suicide Squad—their third entry in the expanding cinematic universe—which features a newly envisioned Joker, and even a Batman cameo. Given fan anticipation for Batman: The Killing Joke, the studio booked a limited number of theatrical screenings; the box-office was surprisingly good, earning about $3.5 million from just the initial few shows. Nevertheless, critics and fans had many of the same concerns that I noted above. It all points to a certain level of desperation from Warner to mend their mishandled DC properties in the wake of Christopher Nolan’s The Dark Knight trilogy and the hugely popular Marvel Cinematic Universe. Warner badly wants to compete, but they keep forgetting the most crucial element about Nolan and Marvel’s output: it’s good. In order to compete, they’ll have to slow down and make better movies. And while Batman: The Killing Joke was a worthy try, the new approach only underlined the original text’s flaws, which seems like the worst outcome possible.