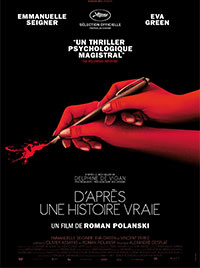 Based on a True Story (D’après une histoire vraie) blurs the line between fiction and reality, and resists giving away its secrets until the final frames. Even then, the viewer must question what they’ve just seen. On the exterior, it resembles a melo-thriller from the 1990s, where an innocent, vaguely sexually charged friendship transforms into an obsessive, psychosexual cat-and-mouse game. Plot elements from Misery (1990), Basic Instinct (1992), and Single White Female (1992) seep into the proceedings, setting our expectations for how this sort of thing usually resolves itself. Giving the film’s apparent awareness of such tropes, it brought to mind Greta, Neil Jordan’s throwback stalker yarn that was deliciously fun but ultimately hollow. However, the source material of Based on a True Story, French author Delphine le Vigan’s 2015 novel, has more on its mind than the stuff of Stephen King, Barbet Schroeder, and Adrian Lyne. It’s trickier and more sophisticated than that, serving as a commentary on the type of fiction that it also happens to occupy.

Adapting le Vigan’s much-praised novel is genre chameleon Olivier Assayas, serving in screenwriter capacity, and who has acquired no limit of experience in everything from supernatural horror in Personal Shopper (2017) to most recently Non-Fiction, a Woody Allen-esque comedy about the state of the modern novel. Assayas’ script was initially written for his early-career collaborator, André Téchiné, but was instead directed by Roman Polanski, which may be the primary reason why the film, which debuted at Cannes in 2017, has yet to receive a U.S. distributor. Nevertheless, Polanski’s career-long experience with claustrophobic thrillers serves him well with this material, as it resembles his past work such as Repulsion (1965), Death and the Maiden (1994), or perhaps more accurately The Ghost Writer (2010)—since Based on a True Story, too, features a mysterious, almost unnamed author of other people’s stories.

At first, the film begins with a familiar scene at a book signing, where bestselling author Delphine Dayrieux (Emmanuelle Seigner) endures no end of flattery and fan worship from her readers. Then she meets Elle (Eva Green), a name that means her, but she explains it’s short for Elizabeth. (The film, which is in French, loses something in the English-language translation, which confusingly changes Elle’s name to Her, short for Hermione, thus losing the double meaning of the name Elle.) Elle claims she is Delphine’s “biggest fan,” a line that makes us suspect she’s Annie Wilkes, except that she’s a fellow writer—a ghostwriter of autobiographies for famous people, whom she calls her “patients.” Delphine and Elle strike up a casual friendship that soon becomes a personal and professional bond, as the troubled author offers her younger, seemingly more confident and organized counterpart, a glimpse into her process.

In a sly bit of misdirection, it appears as though Elle has inserted herself in Delphine’s life because she’s fixated on her, or because she plans to learn everything she can about her idol before replacing her. Elle casually offers to block any distractions to help Delphine’s case of writer’s block, which means getting the password to Delphine’s laptop and answering emails in her name. “You’re saving my life,” Delphine tells her. Before long, Elle is living in Delphine’s Paris apartment and becoming more possessive all the time, giving her advice about what she should write next. “Only I know what you should write about,” she announces. Things get strange when Delphine’s personal notebooks go missing, or when Elle offers to impersonate her at a lecture for literature students—and she demonstrates that she can mimic her voice to uncanny effect. “We’re interchangeable,” she quips. Elsewhere, when Elle shows violent tendencies (a blender receives a beating from Elle’s weapon of choice, a rolling pin), the viewer cannot help but follow the signs into Single White Female territory. 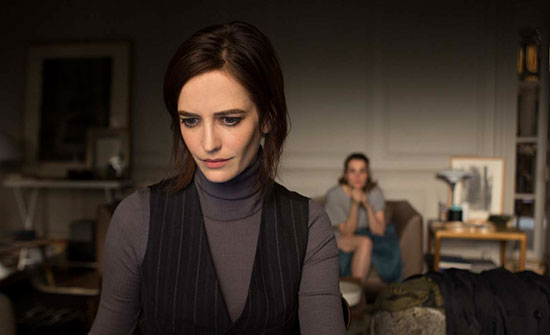 Predominantly a two-hander between Seigner, Polanski’s muse since the underrated Frantic (1988), and Green, Based on a True Story features a couple of sharp, elusive performances. The former isn’t occupying the sexpot and seductress roles that Polanski often casts her in, from her sadomasochistic lover in Bitter Moon (1992) to a feminine force of nature in Venus in Fur (2003). She’s playing a neurotic and self-doubting author entrenched in her process here, and it’s another recent performance that shows how complicated an actor she can be. At the same time, Green’s casting is almost parodic, as she often plays a vampish, femme fatale type, and her expressive eyes have a seductive quality that often gives way to something sinister—see Cracks (2009) or Sin City: A Dame to Kill For (2014). The nature of Green’s character rides on fictional extremes whereby her behavior follows an almost preordained trajectory that advances the surface tension.

Polanski and Assayas drop clues into the genre soup and let it simmer, and Green is excellent at playing these scenes with a quality that rewards reconsideration after it’s over. When Elle ruminates about her past, complete with allusions to a husband and parents who succumbed to either suicide or death under unexplained circumstances, it brings to mind Sharon Stone’s Catherine Tramell from Basic Instinct—a character who, like Elle, is an author with a thorny past and secrets galore. Both characters have a Did she or didn’t she? quality about them, begging us to question whether she really means well for Delphine, or if she’s psychotic. Certainly, there are moments in Alexandre Desplat’s Hitchcockian score that bring the Master of Suspense’s key themes to the forefront—the corners of the human mind inhabited by obsession, murder, and compulsion. But Based on a True Story is more Polanski than Hitchcock.

To be sure, by the third act, Delphine and Elle have secluded themselves in a country lodge to work on their respective books, and Polanski ratchets the suspense, and our suspicion, with several moments that brilliantly toy with our expectations. At one point, Elle screams in panic when she sees two mice have scampered into the cellar. Terrified, she arms Delphine with some rat traps and poison and asks her to take care of them. At the same time, the viewer suspects Elle will close the cellar door and trap her prey. But each time it seems as though the film is going one way, Polanski subverts our expectations and implants doubt—just as he made us doubt, for a time, that the pregnant Rosemary Woodhouse was targeted by a coven of witches who wanted her baby. Polanski is an expert at enclosing his characters in constrained situations and making their behavior suspect. The same is true of the ending, which is either as dull as it seems or sophisticated in a way that advances everything that came before.

Based on a True Story has the kind of conclusion that makes you want to go back and watch everything again, looking for clues in the performances or the subtle maneuvers of Paweł Edelman’s camerawork. Assayas’ influence also meshes well with Polanski, introducing modern technology into the mix in a tense scene on FaceTime, or moments in which Delphine sits in front of a blank Word document—scenes that recall Assayas’ own uses of our devices in The Clouds of Sils Maria (2014) and Personal Shopper. Polanski demonstrates once more that he’s a master behind the camera, delivering a clever story that never becomes what you expect. An extended, slow-burning exercise in deception through a complex relationship between artist and inspiration, or fiction and the real world, Based on a True Story uses its thriller setup to reveal something about the creative process.