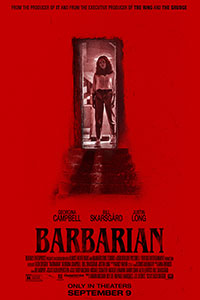 Every year or so, a great horror movie comes along, and, recognizing the audience will enjoy it more if they know nothing beforehand, I find reviewing it a challenge. Barbarian is such a movie. Others of this ilk include Alfred Hitchcock’s Psycho (1960), the snowbound Frozen (2009), and last year’s Wrong Turn—shockers that anticipate our assumptions and defy them. This is where the distinction between a recommendation and a review becomes thorny. If you haven’t seen it yet, but you’re a curious horror fan, I should say nothing else—except that you should see it. So consider the movie recommended, and don’t read further. Return once you’ve experienced it, after the movie has rattled you and turned you upside down, and then read this review. Indeed, a mere spoiler warning isn’t enough. A significant portion of the movie’s success depends on how well writer-director Zach Cregger skillfully destabilizes the viewer, toying with us in clever ways. So again, resist developing any preconceived notions, see Barbarian, and continue reading once you have. And while I won’t reveal all of the movie’s secrets below, knowing anything more than a one-sentence logline is too much.

From the outset, Cregger establishes a don’t situation. Don’t go into the house. Don’t trust the stranger. Don’t go into the basement. When people make such mistakes in horror movies, something grim usually follows. These moments encourage vocal reactions from the audience, and Barbarian is a movie that should be seen in the theater, preferably a packed one, and late at night. The oh-nos, screams, what-the-fucks, and laughter from a release of tension will be loud and persistent. They start almost immediately when Tess (Georgina Campbell), who has arrived in Detroit for a job interview, learns that her Airbnb has been double booked. The house, situated in an abandoned neighborhood, is the one livable structure on the block. Later, her interviewer tells her, “You shouldn’t be there,” and she’s right. The guy inside, Keith (Bill Skarsgård), invites Tess inside to clear things up. Already, Cregger plays with our expectations by casting Skarsgård, the actor behind Pennywise the evil clown in the recent adaptations of Stephen King’s It. His darkened eyes and slender physique read as predatory.

Surely, Tess shouldn’t trust him. But it’s the middle of the night, in a dicey neighborhood, and it’s raining, so what other option does she have? At least, that’s Keith’s argument. Yet, for those same reasons, the audience mutters “don’t” to themselves and groans when Tess steps in the front door. Her bad decisions amass, as do Keith’s unnerving behaviors, causing us to squirm in our seats. He tells Tess that she has a “pretty name” and offers her tea, then wine. Why does he want her to drink something? Has he poisoned it? But Keith is also kind of awkwardly amiable and well-versed in her interests, enough for Tess to drop her guard and agree to share the house with him for the night. Another bad decision. Still, the warning signs compile when she’s compelled into the basement. If she already felt at risk of a #MeToo incident as a woman alone with a strange man, what she discovers takes her into the depths of the house and raises her internal threat level to red. But it’s far more disturbing than I will detail here. 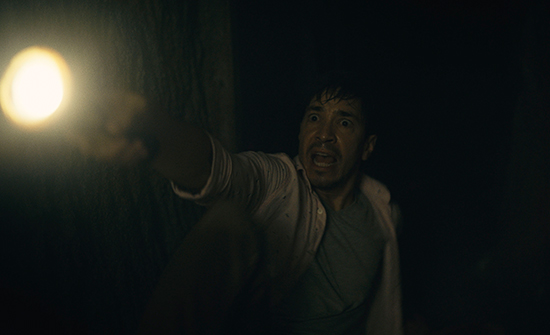 Cregger deploys a structure reminiscent of Psycho—or, if you prefer, Quentin Tarantino’s Death Proof (2007). Midway through, the attention cuts from the woman stuck in the middle of nowhere with a ghoulish monster and shifts focus onto a new character in a wholly different situation. An initially charming Hollywood director in sunny California, AJ (Justin Long) receives a call informing him of stomach-churning news—a woman on his latest project has accused him of sexual misconduct. His career is over, even if, as he suggests, he didn’t do it. Cregger makes another smart casting choice with Long, who’s immediately likable, so much so that he convinces us, for a while anyway, that he might be innocent. But Long has a history of playing outwardly genial bros who have some serious issues with women, evidenced in Drag Me to Hell (2009) and Tusk (2014). In the meantime, AJ assesses his financial situation and realizes he has to liquidate some of his properties to pay for legal fees and, in the movie’s only instance of failing to overcome our disbelief, he must travel to the house in Detroit, his hometown, to prepare it for sale. Why he owns such a drab house, isolated in a forgotten neighborhood, never really congeals.

But no matter. When AJ arrives, he enters the same dark territory as Tess. Yet, Cregger rethinks the descent from AJ’s perspective as a cocky white douchebag, blissfully unaware of the danger because, unlike Tess, a young woman of color, he’s never had anything to fear. In a maddeningly funny sequence, AJ is more interested in learning that he may have extra square footage than concerned about the hidden tunnels beneath his rental property. And just when things start to get serious for AJ, Cregger abruptly cuts again, this time to the early 1980s, where he reveals the origins of 467 Barbary Street. It’s yet another structural inversion in a movie that keeps viewers grasping for answers and stability. With every development, Barbarian proves deliriously unpredictable and worse-by-the-minute frightening. By giving the audience mere glimpses of the movie’s source of terror as it builds, Cregger mounts unbearable suspense that becomes frantic in the gory climax.

Thinking ahead, I’m not sure that Barbarian will ever be so effective as the first-time viewing—at least, not in the thrill-machine sense. Once we’ve learned what lurks in the dark, the terrifying uncertainty is clarified, so revisiting it will probably never have the same impact. This can be said of many films, of course. However, Cregger imbues the material with just enough substance to lend the movie meaning beyond its horror-show appeal and narrative trickery. Compared to how we feel about the two men later, the audience’s reaction to Keith and AJ at first raises questions about the assumptions people make. So do Tess’ interactions with two Detroit police officers, who take one look at a bedraggled Black woman in a rundown part of town and make a judgment. Campbell is excellent in these scenes, even though her character tends to make the wrong decisions throughout. Overall, Cregger has some evident social issues on his mind, which include Reagan’s presidency and the evolution of Detroit. But they never turn his movie into a blatant commentary on racism or the female experience, nor do they distract from the narrative’s momentum. So these thematic strains will probably be even more rewarding on subsequent viewings.

Best known for a string of subpar comedies and his spot in the sketch-comedy group The Whitest Kids U’ Know, Cregger shows an incredible command of his craft with his first venture into horror. The brooding music by Anna Drubich festers beneath the surface, never overemphasizing the moment. Zach Kuperstein’s cinematography makes terrific use of darkness, revealing hints of subterranean figures with all the subtlety of Michael Myers’ pale mask reappearing behind Laurie Strode. Editor Joe Murphy maintains a sharp visual tempo, knowing just when to make a disorienting cut. The cast is small, but the actors are attuned to the game they must play, concealing their characters in a way that makes them impossible to know after just a scene or two. And when things get bloody, the shock and horror prove sick and twisted. Armed with one surprise after another, Barbarian is a brutal, smart, and even disturbingly funny ride that will keep audiences off balance from start to finish. Even with its secrets spoiled, the cunning plot structure and sheer force of the filmmaking are bound to leave your nerves shattered.