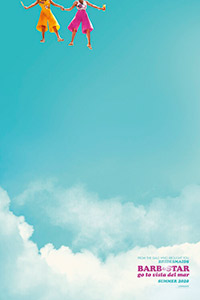 Barb and Star Go to Vista Del Mar has an infectious, goofy freedom that can’t help but conjure a smile. It recalls an extended SNL sketch that introduces idiosyncratic characters and allows the audience to live in their world, albeit briefly. Some recent comedies like Borat Subsequent Moviefilm or Eurovision Song Contest: The Story of Fire Saga have a similar approach; a long, elaborate title is usually a dead giveaway. In this one, the writers and stars, Kristen Wiig and Annie Mumolo, creators of Bridesmaids, don’t limit themselves to one kind of comic genre. There’s a liberating spontaneity that transitions from modest indie character study to musical to James Bond spoof, all within the span of a few minutes. It does this without sacrificing the audience’s investment in the story, without turning the movie into a joke machine and nothing more. Then again, it doesn’t preach at you either; it allows you a much-needed escape into silliness that comedies so rarely provide in any respectable manner. And while you might look at the movie and think it’s either a hot mess or admire its audacity and nonconformity, I’m in the latter camp.

Wiig and Mumolo won’t be receiving any Oscar nominations for their script, as they did on Bridesmaids. Still, they’ve created a quotable movie that’s bound to have viewers mimicking the upper-midwest accents of their neighborly characters from Soft Rock, Nebraska. They play a pair of dull fortysomething women who became best friends after the end of their marriages; they even live together and sleep in the same room in matching beds. Barb (Mumolo) and Star (Wiig) spent their time making hot dog soup for their regular Talking Group with other beige-wearing ladies, they don’t carry smartphones, and they’ve never taken a risk in their lives. They bond over their love of everything banal, from the versatility of culottes to how “Trish” really is the best name for a woman—leading to an extended riff on an imaginary Trish that later materializes into an actual person. When Mumolo and Wiig’s two homebodies aren’t dreaming about how Mr. Peanut is the perfect man, they’re reminding us of great comedians such as Gilda Radner or Madeline Kahn, who were capable of about ten layers in the same comic performance. 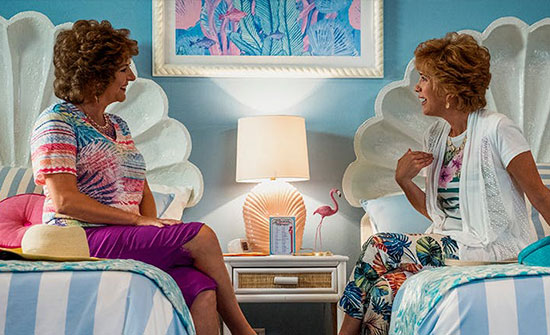 Plot aside, the pleasure here is watching Mumolo and Wiig disappear into Barb and Star, who aren’t so much caricatures as recognizable types. They’re drawn to every seashell kiosk and delight in how the resort “smells like Red Lobster,” and their greatest aspiration is a high-speed banana boat ride or meeting Tommy Bahama. But Barb and Star feel drawn from the same gene pool as Radner’s Roseanne Rosannadanna or Lisa Loopner; Dana Carvey’s Church Lady; Nora Dunn’s Pat Stevens; or Liz and Candy Sweeney as played by Dunn and Jan Hooks. They’re at once cartoonish, unapologetically broad comic characters, yet they’re not entirely devoid of relatable humanity. Star finds herself in a romance with Edgar beyond their raucous sexual chemistry before long, while Barb discovers that trying new things fills her life with exuberance. And we want to see these characters happy. Although the second act conflict between them feels manufactured, we’re nonetheless overjoyed when they come together as best friends again.

Of course, not every joke lands. No movie that contains so many random asides will hit every mark, though Barb and Star Go to Vista Del Mar comes close. There’s a hotel lounge singer whose lyrics consist of synonyms for “boobs,” and the gag falls flat. Damon Wayans Jr. makes an appearance as Edgar’s spy contact, and his character’s terrible attempts at secrecy weren’t all that amusing. Nor did I think the arrival of a Trish Ex Machina resolved the conflict well, even if she was played by Reba McEntire. But for every idea that’s dead on arrival, a dozen more feel inspired. Director Josh Greenbaum, whose credits include the George Lazenby documentary Becoming Bond and a doc about The Dana Carvey Show, demonstrates his capacity to alternate between several tones and styles. He delivers a convincing Busby Berkeley musical number early on, complete with Floridian pastels and synchronized choreography. Elsewhere, he and editor Stevie Welch deliver several well-edited sequences, one of them involving a riotous sneeze, the other in two identical date montages. It’s a nimble production, to be sure.

Will Ferrell and Adam McKay produced Barb and Star Go to Vista Del Mar. Usually, their productions tend to overstay their welcome with indulgent runtimes and abrasive, over-the-top characters. And this movie shares some DNA with countless Ferrell characters from Talladega Nights: The Ballad of Ricky Bobby to Step Brothers to Holmes & Watson, except Barb and Star prove more endearing and palatable than most of Ferrell’s creations. You only just start to feel the movie’s 107-minute length in the last act, but it’s over before you start checking your watch. Here’s a movie that doesn’t need to reflect on our society in any meaningful way, doesn’t detour into a commentary on Florida’s political undercurrents, and doesn’t remind you of the world you inhabit. It’s as though Mumolo and Wiig designed their movie to provide a vacation for their audience, complete with a getaway locale and escapist plot. Sometimes, that’s exactly the sort of diversion an audience needs—a comedy whose sole claim to sophistication is recognizing that not every comedy needs to be sophisticated. Sometimes, frivolous and kooky is just right.