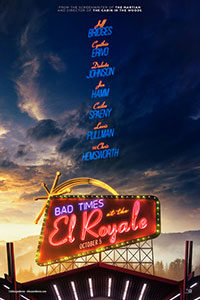 A group of strangers, each harboring a secret. A gimmicky hotel on the border of Nevada and California, filled with history and creepy undertones. A series of mysteries revealed in a pulpy, post-Tarantino format. Drew Goddard’s Bad Times at the El Royale seems like it came out of the 1990s; or at least, that’s the last time this familiar setup would have seemed novel. But despite its structure, reminiscent of everything from Key Largo (1948) to Four Rooms (1995), Goddard imbues the twisting plot and quirky characters with vibrancy and humanity. If his debut, The Cabin in the Woods (2012), dismantled prototypical horror movies from the inside out, then this sophomore effort pays homage to a mishmash of crime subgenres. The director, working from his original script, also administers a hearty application of 1960s Americana, complete with a predominance of soul music on the soundtrack, a reflection of anarchist cultism, and Nixonian paranoia. It’s the sort of thriller that’s juicy and filled will all manner of influences, even if those finer points are sometimes messily applied. And yet it manages to be rewarding, in the sense that its characters, even the less developed ones, have no fewer than two dimensions. With the film running nearly two-and-a-half hours, Goddard demonstrates that he cares about these characters and enjoys spending time with them, and thus so do we.

The film opens in a nondescript room in the El Royale, a hotel near Lake Tahoe that used to house everyone from members of the Rat Pack to former presidents. But its clientele has since diminished. A well-dressed, unnamed man (Nick Offerman) arrives, pulls back the carpeting in his room, dislodges the floorboards, and hides a case of money underneath before putting the room back together again, neat and tidy. And there the money remains for the next ten years, until the fateful day in 1969 when several strangers arrive, seemingly ripped from the pages of a cheap noir novel. A fast-talking salesman Laramie Seymour Sullivan (Jon Hamm) has more than vacuums in his suitcases; he has a G-man’s field kit. A priest, Father Daniel Flynn (Jeff Bridges), though stricken with memory loss from Alzheimer’s, at least remembers his criminal past. Darlene Sweet (Cynthia Erivo), a failed backup singer for a soul group, heads to Reno to start her solo career. And Emily Summerspring (Dakota Johnson), a hippie with someone tied up in her trunk, checks in under the name “fuck you” in defiance of the stringent policy enforced by the hotel’s sole employee—Miles (Lewis Pullman), a nervy worker who doesn’t really understand his role at the hotel, appears tired and worn down, and searches for absolution from his life of sin.

As one might expect from a film with a place in its title, the El Royale is a character unto itself, even though such things are now deemed clichés. Regardless, the mid-century décor is bisected down the middle, where a red dividing line indicates the ritzy, gambling-friendly Nevada half or the sunnier, paradise-centric California half. Production designer Martin Whist oversaw the building of a 10,000-square-foot soundstage in which he decorated loud wallpaper, exposed bulb lighting, vintage gambling tables, a jukebox loaded with soul records, an automat-style eatery and a gold-accented bar. Inside of this impressive set, cinematographer Seamus McGarvey’s camera makes excellent use of the widescreen frame, often capturing several characters spread across the expansive hotel lobby in a single shot. In the rooms, however, things are more cramped, toned down and uniform—designed identically to facilitate a secretive hallway that runs behind the rooms, from which two-way mirrors allow a clandestine spectator to observe, and record, the hotel guests in their privacy. 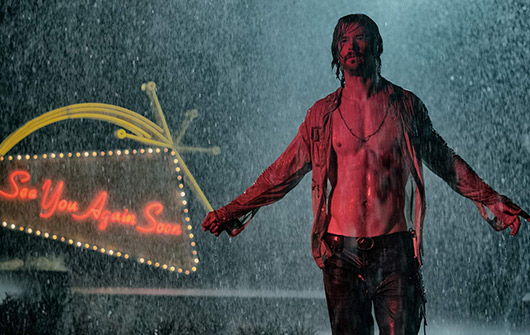 What proceeds is a mystery filled with slow-burning suspense and intricate characterizations revealed in small doses. The story unveils details about the hotel’s shady raison d’être that deepen the mystery but hold back from exposing its darkest secrets, thus preserving our interest. For instance, it’s uncovered early on that two different sets of recording devices from two parties have been hidden in the rooms. If one set belongs to the Hoover’s FBI, then to whom does the other set belong? Despite such questions, the characters’ secrets take precedence. In many ways, Bad Times at the El Royale resembles an extended episode of Lost, where Goddard was a contributing writer for several years. The comparable structure employs backstory-laden flashbacks that add to the scenes in the present. Its characters each appear to be one thing, but they’re actually another thing entirely. Fortunately, unlike Lost or the similarly-themed Identity (2003), the characters aren’t all dead or just figments of another character’s unconscious mind. Goddard’s screenplay is firmly rooted in the crime thriller arena, lending more apt comparisons to the Quentin Tarantino camp.

Goddard amps up the looming dread of his dark and stormy night with the arrival of Billy Lee (Chris Hemsworth), a pseudo-Charles Manson cult leader with the mannerisms and voice of Jim Morrison, and an ever-open shirt to reveal his distractingly chiseled torso. His merciless game of roulette results in some shocking deaths and confessions, but Goddard never loses control of his film’s concentration on character. Watch the excellent scene where Billy Lee incites a potent reaction from Darlene, who looks the weirdly philosophical psychopath in the eyes and says, “I’m just bored of men like you. Fragile little men who prey on the weak and lost. I’d rather sit and listen to the rain.” Hemsworth’s finest bit of acting in his career may be the moment when his character realizes what Darlene is saying is true—a moment that connects charismatic personalities like Billy Lee to self-interested patriarchal leaders who exploit fears to serve their own agendas (resulting in a theme that recalls 2017’s American Horror Story: Cult, where an underground cult leader represents an apt parallel to Donald Trump).

Regardless of the degree to which Goddard has ostensibly made a lesser version of Pulp Fiction (1994) or something like it, his film is expertly crafted and acted, an homage to an homage. The slick plotting and structure reward the audience with its revelations, but perhaps most satisfying is how much remains a mystery about the hotel. In the end, we can’t help but wonder what the hell’s going on there. But this isn’t a film where every secret is explained to the audience’s delight. And yet, its characters, from Bridges’ bank robber-turned-priest to the lowly hotel attendant, carry a weight that invests the viewer in their fates. Bridges, Pullman, and Sweet are particularly good throughout. Goddard’s script, which on the surface could be accused of selling an angle more than a narrative, nonetheless allows the actors several leisurely moments to chew scenery or simply inhabit their roles. It is these moments—and the time Goddard spends developing them in their sometimes flashy, sometimes sordid, but always atmospheric surroundings—that make Bad Times at the El Royale an enjoyable and rewarding experience.