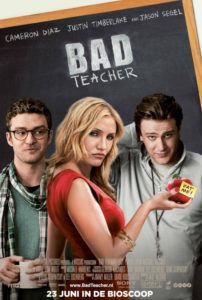 Desperate to shock its audience but at the same time reluctant to do so, Bad Teacher spoils its potentially daring and raunchy setup by putting its heart in the wrong place, which is to say, the filmmakers have their hearts in the right place. Despite a concept centered on a foul-mouthed, sex-obsessed, and drug using teacher in charge of a junior high classroom, the result feels more sentimental like The Winning Season than its obvious model of Bad Santa. With occasional moments of bawdy and acerbic humor to earn its R-rating, the warm-hearted message prevails in the end, leaving the movie, directed by Walk Hard helmer Jake Kasdan, comparably soft next to other modern comedies willing to take outlandish risks for the sake of comedy.

Cameron Diaz plays Elizabeth Halsey, a gold-digger who’s dumped by her fiancé when he sees through her intentions. Forced to remain in her teaching position for income, Elizabeth ignores the syllabus and shows movies to her class every day, while she sleeps off the night before. This goes ignored by everyone, teachers and parents alike, except her unhinged fellow teacher, Amy Squirrel (Lucy Punch). Elizabeth hatches a scheme to get breast implants, which she believes will help her land a well-to-do man. She sets her sights on the school’s new substitute, Scott Delacorte (Justin Timberlake), a rich boy with a family fortune. Phony as can be, Delacorte gravitates toward Squirrel to make one of those obnoxious lovey-dovey couples, which, of course, Elizabeth plans to break up. Meanwhile, the school’s down-to-earth gym teacher, Russell Gettis (Jason Segel), makes ineffective passes at Elizabeth, who’s too focused on her shallow pursuits to notice he’s a nice guy.

Writers Gene Stupnitsky and Lee Eisenberg (The Hangover) leave a lot of questions unanswered. You might wonder how and why Elizabeth ever became a teacher in the first place. It’s difficult to imagine her studying through college teaching courses to get a degree in a field she cares nothing about. Did she once have aspirations to be an educator that were overcome by her incredible superficiality? The same question applies to Delacorte, whose family fortune surely should have assured him a better position than junior high substitute; if there’s a reason he’s slumming it, we’d like to know why. And what about Ms. Squirrel? The movie makes several references to some “incident” in 2008 that would seem to explain her character’s bizarre behavior, except we never learn what that incident was (…perhaps on the inevitable “Unrated” video release). The only character who makes sense is Segel’s nonchalant gym teacher, a man comfortable in his skin and unconcerned about his social status given his occupation. As a result, Segel’s few choice scenes are the movie’s best.

Much like the rest of the movie, Diaz never fully commits to her role. As is often the case with her, the audience can see through her acting, and it distances us from the material. She’s involved in a few funny scenes, including a hilarious dodge ball punishment for her students, but overall she’s trying too hard to look miserable. Trouble is, the filmmakers want their star to look attractive to their male audience, so they never allow her to embarrass herself, which is what a role like this requires (and what Billy Bob Thornton committed himself to in Bad Santa). As for  Timberlake, his acting is just as self-conscious and cartoonish as his performance in The Love Guru (you forgot about that one, didn’t you?). He seems to think he’s in an extended SNL skit, and always seems this close to winking at the screen.

There was potential here to really push the envelope and try something risqué, but Kasdan never commits his cast to anything too audacious. A few changed words and maybe one or two scenes featuring gratuitous breasts omitted, and the movie could have easily made the PG-13 standard. The nastiest sex scene involves awkward, clothes-on dry humping, while the children are never really exposed to anything grotesquely amoral. One can’t help but wonder if the script was originally more shocking, but later rewritten to suit the celebrities of Diaz and Timberlake. Whatever the reason, the filmmakers play it safe, which is exactly what anyone seeing this movie doesn’t want. Instead of being one of the extremes of over-the-top hilarious or painfully unfunny, Bad Teacher reaches with mid-level aspirations and achieves mediocre results.