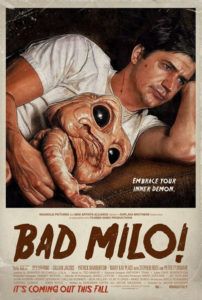 Deceptively clever, the story follows Ken (Ken Marino), an everyman type who works in an office and has a wife who loves him. At work, his shady boss (Patrick Warburton) has put a reluctant Ken in charge of an upcoming string of layoffs. At home, Ken’s wife wants a baby, while his mother (Mary Kay Place) brags about her active sex life with her new boyfriend Bobbi (Kumail Nanjiani). Pressures and stressors abound, Ken tries desperately to remain steadfast and never respond with anger, but he’s also incapable of showing his true feelings, and so he suffers from crippling anxiety. His gastrointestinal health has paid the price as a result. After seeing a proctologist, Ken discovers he has a stress-induced polyp in his colon; to help reduce further growths, he’s told he must see a psychiatrist (Peter Stormare) to talk about his predictable daddy issues. Through laparoscopic surgery and New Agey psychoanalysis, Ken comes to find he has a monster living up his ass. Soon named and befriended, the slippery, bloodthirsty creature Milo attacks those coworkers and eventually family members to whom Ken unconsciously wishes harm.

Within this scenario, director Jacob Vaughan and co-writer Benjamin Hayes have tapped into half a dozen memorable horror films from the 1980s. When Ken’s anxieties manifest into the physical form of a morbid little creature, the story nods to David Cronenberg’s The Brood. As Milo runs amuck and scurries across the floor, Vaughan’s Milo-vision shots recall similar ones from Larry Cohen’s It’s Alive. A scenario wherein the protagonist hides a freakish part of himself that escapes and kills at large can’t help but evoke Basket Case. But Milo himself isn’t always snarling; when he’s puppy-eyed and affectionate to Ken, we’re reminded of the relationship between Gizmo and his owner in Gremlins. The references could go on and on, but what’s evident throughout is how Vaughan and Hayes have made the story their own.

Bad Milo! is a very self-aware movie, both in its derivations and in its social and psychological underpinnings. Most middle-class men will be able to identify with Ken, who’s forced into an increasingly, overwhelmingly narrow corner both on the job and at home. His many humiliations are exaggerated for comic effect, of course (there’s an absurd turn where his office is moved into the restroom), but most viewers will be able to identify with the satire. When Milo, the materialization of Ken’s repressed anger, appears in a living metaphor, all of the psychological symbolism materializes with him. In one scene, the braggingly virile fertility doctor (Toby Huss) tells Ken that he’s risking his marriage unless he impregnates Sarah; later, Milo attacks the doctor and bites off his penis. Now that’s a solution for classic Freudian castration anxiety.

Marino, best known from The State and Children’s Hospital, engages in all manner of physical comedy and farcical degradation, some of it slapstick, some of it slapstick-infused with gore, none of it outrageously funny as the concept alone suggests it should be. But Marino commits so fully to the role that he also manages to be a sympathetic hero who earns our compassion. If one thing can be said for Bad Milo!, it’s that the movie keeps us involved in Ken’s life. Opposite him is a series of practical puppets, alternating between monstrous and cutesy, that bring Milo to life. The movie’s major misstep is that it doesn’t go far enough to exploit the unique bond between Ken and his butt demon for laughs; only a short, amusing “honeymoon period” is shown between the two in montage. Milo never becomes the E.T.-type character he should have become. Although it’s good for the occasional chuckle, Bad Milo! tackles some relevant social and emotional issues, making it more than a movie about a guy with a killer demon in his butt. Then again, the viewer must ask themselves, am I watching a movie about a guy with a killer demon in his butt for a social commentary or for absurdist laughs?