In Bacurau, the latest from Brazilian director Kleber Mendonça Filho and his collaborator Juliano Dornelles, there’s a brief scene in which a string of horses run down the main drag of a small village. A dog in the foreground, resting in the street, watches as the horses barrel toward him. Waiting until the last second, the dog finally scurries away and avoids being crushed. It’s an apt metaphor for what ensues, a stark commentary on Brazil’s (and the world’s) escalating class division, told through Frankensteined genre impulses. The film’s opening shot from space, and the later sighting of what appears to be a UFO, suggest that something alien approaches. From a certain point of view, that’s precisely what happens. The story takes place “a few years from now” when the rolling influence of modernity threatens to overtake Bacurau, an isolated Brazilian village in Western Pernambuco. A community rooted in venerable traditions and violent history, their customs entail psychotropic drugs and mythologies involving a large avian predator that comes at night. When they’re confronted with American imperialism and corrupt politicians, who view them as an obstacle to overcome, the people of Bacurau retaliate in a bloody rebellion. The result screams Western, sci-fi paranoia, and political outrage in the same breath, though sometimes the film confounds in its unwieldy shifts of tone and varying degrees of seriousness.

Although the early scenes of Bacurau introduce the village through the eyes of Teresa (Bárbara Colen), a local who returns to her home for a funeral, there is no central protagonist in the film. The occasion for Teresa’s return: the burial of her grandmother, Carmelita, the village matriarch and soul of the community. After Teresa arrives, she reconnects with the people living in this arid landscape, where food and fresh water remain scarce, withheld by the smarmy mayor, Tony Junior (Thardelly Lima). Her father, the schoolteacher Plinio (Wilson Rabelo), oversees the funeral, while other townspeople add to the eclectic mix. Among them, there’s a pimp and his prostitutes, widely accepted by other residents; a DJ who serves as town anchorman in place of any radio or television communications, announcing bulletins with a microphone and speakers; and Pacote (Thomas Aquino), a former criminal whose violent exploits serve as video entertainment for youngsters in town. On the outskirts, an old-timer makes the psychedelics that play a vital role in the culture. And then there’s Domingas (Sônia Braga), an alcoholic doctor who interrupts Carmelita’s funeral by pronouncing her a “whore” and “witch” out of overwhelming grief.

Amid the scenes that acquaint us with Bacurau’s people, there’s also a looming sense of dread of things to come. When Plinio tries to show the schoolchildren Bacurau on a map, it appears their village no longer shows up in directories or on satellite imagery. No one can get cell phone reception. Farmers a few miles outside of town go silent, because, as we learn soon enough, they have been brutally murdered. As mentioned, Mendonça Filho and Dornelles implant the fear of something other-worldly with their opening shot—recalling how The Thing (1982) or Predator (1987) begin, sans flying saucers. Moreover, editor Eduardo Serrano’s use of transitional wipes, most commonly seen in Star Wars, brings up visual associations in the viewer, hinting at the arrival of something from beyond our atmosphere. Then again, George Lucas borrowed the wipe from Akira Kurosawa, and sure enough, there’s more of Seven Samurai (1954) in Bacurau than anything related to Star Wars. The village soon finds itself under siege by a group of well-armed, deeply racist American villains led by Michael (Udo Kier), who have chosen the town as an arena for a most dangerous game—recalling the events in this year’s The Hunt. 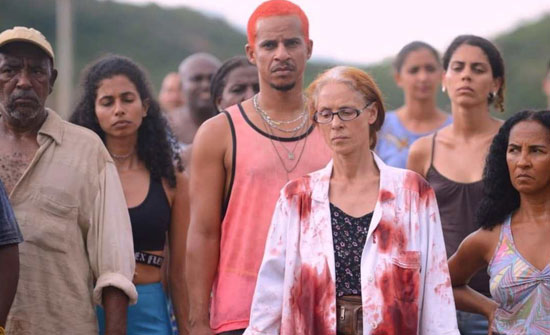 Mendonça Filho achieved some acclaim on the international film circuit with Neighboring Sounds (2012) and Aquarius (2015), on which Dornelles served as production designer. These earlier films, about people grappling with modernity’s invasion of their private urban space, do not suggest what’s coming in the genre mashup that is Bacurau. They do, however, share themes about Brazil’s conflicted relationship between tradition and the so-called future. It might be a mere coincidence that right-wing authoritarian Jair Bolsonaro became Brazil’s president in January 2019. Bolsonaro’s policies regarding the environment and gun control mirror those of today’s other pseudo-fascist leaders, whose xenophobic and gun-crazy ideology is evidenced here in the American characters. All that is new is not good, these films seem to say, and there’s a rich culture being wiped out and replaced with something far more homogenized and exploitative. With that in mind, Bacurau is both a departure and a logical progression of their work, grappling with similar ideas through a different grouping of genres.

Still, there’s a transition from the spare arthouse aesthetic in the film’s first half to the gleefully violent, downright arch mannerisms in the second half, which can feel jarring and inconsistent. The Americans, portrayed in caricature as gun fanatics on safari for human prey, are not unlike those rich assholes who go hunting for big game on African reserves, where they are led to their kills by demeaned locals—the Americans treat their two guides as subhuman because they’re “not white.” Eventually, the viewer can delight when these abrasive, crudely-drawn villains receive their comeuppance, just as we not-so-secretly cheer whenever a lion gets the jump on an American businessman trying to prove his masculinity under the most controlled of circumstances. Indeed, the Americans don’t know what they’re facing, as signaled by the sudden arrival of rocking synthesizers composed by Mateus Alves and Tomaz Alves Souza, which sounds like the music of John Carpenter and Alan Howarth. In a stark preparing-for-battle montage, the people of Bacurau join together, pop some psychotropics, and reveal their quaint village as a site of battle readiness. The hints were there all along, including our questions about what lies beyond the entrance to the town’s museum, or why the townspeople embrace Pacote as a resident hero. And then there’s the song at Carmelita’s funeral, with everyone harmonizing about “a feast of fear and terror.” In that regard, the film’s final half-hour doesn’t disappoint.

Bacurau debuted at the Cannes Film Festival in 2019, a year of auteur filmmakers telling wildly entertaining stories about the dynamics of class and the dangers of capitalism (Bong Joon-ho’s Parasite took home the festival’s Palme d’Or, while Rian Johnson’s Knives Out proved a major crowd-pleaser). But Mendonça Filho and Dornelles seem less assured about their accessible genre trappings than of their political symbolism, making their playful use of wipes, sharp edits, and other formal touches somewhat shakily applied. Similarly, Bacurau lacks a strong protagonist, as the screenplay leaves backstories and personalities altogether one-note. But what the film lack in diverse characters it makes up for in its statement against hostile governments and cultural elitism. It’s enough that the villagers, who maintain a careful balance between tradition and their few modern conveniences, band together against a common enemy. Their fight turns the film into a bold social commentary, an active protest against classist and colonialist oppression. Although, it’s told in a way that will gain interest among crowds outside of the narrow arthouse demographic and, hopefully, will create awareness about the broader issues Mendonça Filho and Dornelles want to address.