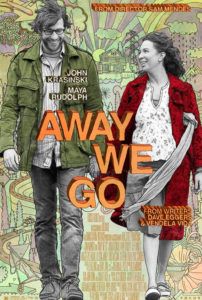 Bittersweet and charming, Away We Go drives on emotional terrain, resulting in a wholly atypical romantic comedy. Scripted by a real-life married couple, novelists Dave Eggers and Vendela Vida, the story involves a series of vignettes presented in road movie format. The central couple treks through their uncertainties, confirming along the way that their love is wonderful and unique and true. It sounds corny, and maybe it is, but it’s also calming and endearing. The film is funny and sad in an effortless sort of way. Isn’t that how love really is?

John Krasinski and Maya Rudolph play two of the most human screen couples you’ll ever see. Burt and Veronica live in Colorado close to his parents (Jeff Daniels and Catherine O’Hara). She’s a medical textbook illustrator and he’s an insurance salesman. These are incredibly nice people. Probably nicer than anyone like you or me could ever hope to be. We learn that Veronica is pregnant in a rather original way for a romantic comedy. Six months later, Burt’s parents announce that they’re moving to Belgium without a thought of their unborn grandchild. With this news, both feel lost in the world, without roots, and so they decide to visit their friends and look for a new place to live. As friends do, theirs have all moved away to other states, making the film’s journey a zig-zagging one.

They make stops in Phoenix, Madison, and Montreal, among other places, joining friends and relatives that seem to demonstrate every way that Burt and Veronica couldn’t possibly be happy. Veronica’s former boss Lily (Allison Janney) and her husband Lowell (Jim Gaffigan) are a nightmare couple, most likely both alcoholics, and offensive and miserable in their lives. On to Burt’s “cousin”-turned-hippie, the ultra-feminist Ellen (Maggie Gyllenhaal), who writes her name “LN” and believes that children should be eyewitnesses to their parents’ sexuality. The seemingly normal couple, Tom (Chris Messina) and Munch (Melanie Lynskey), adopt to make themselves happy, but they’re just putting on a good show to cover their despair.

Director Sam Mendes observes from a safe, dispassionate distance, letting his actors work their magic. The soundtrack calmly plays acoustic songs that disappear into the overall tone, and Krasinski and Rudolph do their best acting through pensive expressions. Rudolph proves that her dramatic potential far exceeds her comedic range from Saturday Night Live, and Krasinski, from The Office, keeps right up with her. Both have a delicate way of speaking with their far-away eyes, making it evident that neither character really knows what to do.

Mendes has a way of making couples in the audience reflect on themselves as individuals, analyzing where they stand in the world and exactly how they will live together ten or twenty years from now. Will they still be happy after all that time? Is their love strong enough to create a loving bubble that protects from the dangers of society and time? In Mendes’ films like American Beauty and Revolutionary Road, there didn’t seem to be much hope, and whatever hope that existed was met with tragedy. Away We Go offers a more thoughtful, simple solution.

You know you’re not this film’s target audience if you find Burt and Veronica to be self-righteous slackers who stick their noses up at everyone because they believe they’re superior. Indeed, if compassionate, gentle, educated, independent, and loving people who don’t want to get married threaten you, then here’s your forewarning: Don’t watch this film. There’s a sophistication in their love that doesn’t need your approval. You don’t need to agree with their viewpoints on how to raise children, nor Veronica’s refusal to get married, whatever her reasons. You don’t need to like them. But it wouldn’t hurt if you admired them for finding their own way. How often can people do that?