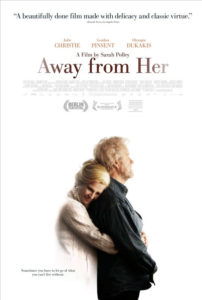 The agage “time heals all wounds” becomes an impossibility when faced with Alzheimer’s, as the progressive disease’s victim is almost incapable of remembering time and the events therein. It may be one of the only diseases arguably harder for the victim’s friends and family than the victim, since the outsiders are more aware of the inherent deterioration. The victim has the benefit of obliviousness. Away From Her deals with Alzheimer’s directly through the retired married couple Fiona and Grant Anderson (Julie Christie and Gordon Pinsent), who are now unable to reconcile their lingering wounds because of Fiona’s worsening state.

Married for most of their lives, Fiona and Grant now live a quiet cottage life, enjoying quaint breakfasts in comfy sweaters, and long afternoons of cross-country skiing on their picturesque, snow-dusted land. The movie avoids showing us the bliss that preceded this point in their marriage; it begins with early signs of Fiona’s condition already taking over. Much to her embarrassment, she forgets the word “wine” at a social dinner—this among a spree of more dangerous warning signs. On her initiative, she checks into a treatment center specializing in Alzheimer’s patients, despite Grant’s protests at its policy that residents are prohibited from contact with their family for the first 30 days. The month away is supposed to ease a patient into the clinic’s routine, though one suspects it helps dilute the patient from their ties to the outside world.

During that month, Grant finds some solace in Kristy (Kristen Thomson), a sympathetic nurse at the clinic who has seen how people often drift in and out of awareness. She seems to understand that Fiona is in her own world and how difficult that is for Grant. When he’s finally allowed to visit, he finds Fiona has attached herself to another, more “developed” patient, Aubrey (Michael Murphy). Some time ago, Fiona and Aubrey knew each other, how exactly isn’t said, but we have our suspicions. Now, Fiona looks at Grant as if he were a random visitor. She smiles and acknowledges his presence, insofar as it doesn’t impede on her time with Aubrey. Grant takes the jealous husband role, trying to determine if Fiona consciously selected Aubrey or if this is just another cruel twist on his marriage.

In the recent dramedy The Savages, Philip Bosco played an elderly father of two children, and we see them struggle through their father’s mental decay. Bosco holds long, vacant expressions with a glimmer of buried memories deep inside. Whether he remembers something specific or perhaps only recalls an image he cannot place but finds familiar, we cannot be sure. We see this glimmer in both Bosco, and Christie’s Oscar-nominated performance. Christie’s pensive, distant, yet at once congealed performance is more than just a shell observed by Gordon Pinsent’s husband character. We suspect that perhaps Fiona accentuates her illness as punishment for Grant, for an affair he had long ago. Fate places her in the nursing home next to Aubrey with a sly sense of poetic retribution, one Grant cannot help but suspect. Christie remains veiled, her eyes far-off, yet with the possibility that she’s understood everything she’s said and done since the Alzheimer’s overwhelmed her. Watching her portray the small chance of recognition in an otherwise lost persona is staggering for the viewer, and heartbreaking for Grant.

Grant eventually visits Aubrey’s wife, Marian (Olympia Dukakis), asking if Aubrey could be moved, but later finds himself searching for a way, any way, to make Fiona happy. If only to illicit some kind of pleasant recognition from her, he asks Marian to bring Aubrey back to Fiona. As we watch Pinsent realize his love for Christie extends beyond jealousy now, we appreciate what frank and endearing performances both actors have given, making the surprising developments between Grant and the otherwise stern Marian equally refreshing and saddening.

The film holds incredible promise for first-time Canadian writer-director Sarah Polley, who evokes legendary emotional philosopher Ingmar Bergman’s stylistic simplicity and emotional complexity. Normally an actress (see The Sweet Hereafter or 2004’s Dawn of the Dead), Polley works with her frequent collaborator and director Atom Egoyan, who takes a producing credit here, to convey a pondering despair. Having based her screenplay on The Bear Came Over the Mountain by Alice Munro, originally published in the short story collection Hateship, Friendship, Courtship, Loveship, Marriage, we see a great concentration on the space between individuals and the emptiness left inside of them from this disease.

Shot on wintry landscapes in Canada by cinematographer Luc Montpellier, the best (and most obvious) compositional comparison to Bergman’s material would be Winter Light, a film in which the brightness of the title engulfs its characters in ironic religious angst. Polley’s own winter light washes Christie’s character in an overwhelming confusion. There’s a scene early on where Fiona is cross-country skiing along a familiar path; she decides to go off the path and quickly finds herself astray, as Alzheimer’s patients often rely on repetition and routine. Pushing herself through the woods, she lies down in the snow, resigned to being lost.

Polley’s deceptively simple direction suggests her place resides behind the camera, even though her career thus far has been in front of it. And while Away From Her certainly contains Bergmanesque qualities, this is not Woody Allen’s Interiors—not an all-out stylistic embrace, rather a sleight influence in tone. Characters seem to converse and evoke delicate emotions with their silence, more so because Christie and Pinsent offer two of the most substantial, affecting performances of 2007.