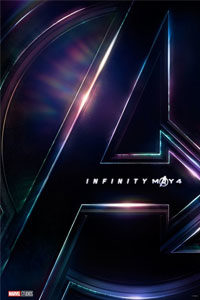 A landmark in the Marvel Cinematic Universe, Avengers: Infinity War boasts around two-dozen superheroes converging in an epic-sized crossover the likes of which the comic book genre has never seen. Marvel Studios has loaded the eighteen preceding films with storylines, fanboy clues, subplots, and post-credits scenes leading to the events in this film, marking its arrival as a monumental and unprecedented event in blockbuster filmmaking. It makes the previous crossovers of The Avengers and Avengers: Age of Ultron seem quaint by comparison. After all, no other franchise in the history of cinema—not Star Wars, not The Lord of the Rings, not Indiana Jones, and certainly not the DCEU—has accomplished the consistent vision of scope and spectacle as Marvel’s president Kevin Feige and his team of talent have. And Infinity War is a rare commercial film that realizes, to its full potential, everything that works about franchise filmmaking and remains unique about the MCU, which is to say, it assembles the eighteen building blocks that came before into a culmination. Using the bonds and plot elements of earlier Marvel films, Infinity War puts every established storyline and character to use by unleashing emotion, action, humor, tragedy, romance, and shocks over the course of its breezy two-and-a-half-hour runtime. The audience is left drained, albeit thrilled, and as every great MCU title does, it leaves us hotly anticipating the next chapter.

Over the last decade, Marvel Studios has developed what other major Hollywood players can only try and almost never achieve. The MCU was founded on grandiose world-building, as it translates Marvel’s comic book interconnectedness into the motion picture realm with a clarity that weaves their stories and filmmakers together. They’re not exactly works of auteurism, but that they each feel connected is a feat not easily managed. In terms of their cohesiveness from one production to the next, the ever-expanding MCU has grown about ten sub-franchises that, while accessible as individual films, converge into their overarching Avengers label every few years. Everything in-between feels like a limb on a larger organism—to the extent that the MCU’s critics decry the material for its homogeneousness. Indeed, the same thing that makes the MCU unprecedented and appealing, its uniformity, remains the quality that many censure. But not since the Golden Age of Hollywood has a filmmaking assembly line delivered such a lovingly considered, consistently polished, and entertaining commercial product. 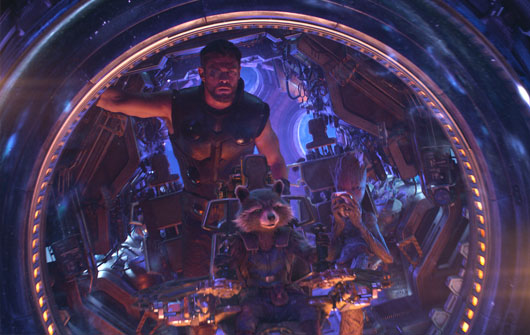 For better or worse, Marvel has changed the way studios make franchises and how people think of the moviegoing experience, so much so that what the films represent within the industry is sometimes a detriment to the quality of the films themselves. Often accused of dominating the marketplace and reducing Hollywood to nothing more than assaultive CGI superhero fare, the MCU films stand out due to their rarely undeviating vision. They cannot be thought of on the same wavelength as a traditional stand-alone film, nor should they be compared to their lesser imitators. Regardless of what they represent for the future of the film industry, they’re trying something different with their interwoven plots and, moreover, the expectation that viewers have been following along for the last decade, and most of us have. Surely this is why Infinity War comes with such a ridiculous degree of expectation, as Marvel’s considerable efforts to deliver films that compliment and interrelate to one another focalize here, more than previous crossovers. (Perhaps now is a good time to warn you: the remainder of this review considers the film in some detail. Readers should be aware that some of the major plot twists, deaths, and surprises will be addressed, and so it’s best read after your own viewing.)

The film picks up where last year’s hilarious and dazzling Thor: Ragnarok left off, with Asgardian refugees floating through space only to be confronted by a mysterious ship. That vessel, as it turns out, belonged to Thanos (performed through motion-capture by Josh Brolin), a purple, godlike villain, and easily the most compelling baddie in the MCU thus far. Hints at Thanos’ master plan have found their way into the MCU for years. He’s after the Infinity Stones, six all-powerful elemental gems (Mind, Soul, Space, Power, Time, and Reality) that, when combined on his golden “Gauntlet” glove, will allow him to control the universe at will. He hopes to create “balance” by culling half of all life, which will allow the other half to thrive. It’s the kind of plan that could only be conceived by a villain who sees himself as a hero. Under the impressive mo-cap effects, Brolin plays Thanos as a despotic character nonetheless saddened by suffering. Thanos later admits he watched the people on his home planet of Titan starve to death, leaving him alone and maddened by a desperate need to prevent such a thing from happening again—and his solution involves gathering the components of his Infinity Gauntlet to literally snap his fingers to achieve balance. It’s a deeply disturbing ambition but one that feels compelled by empathetic motivations, despite his tyrannical solution. 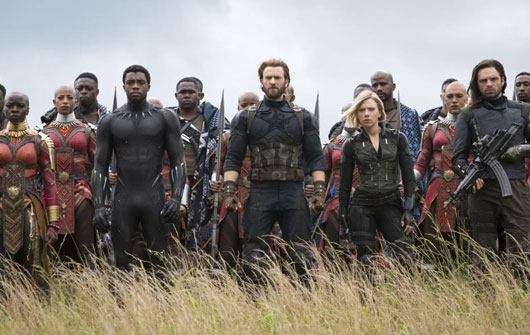 Each of the Infinity Stones represents a MacGuffin, and the film’s enormous roster of superheroes resolve to divide and conquer, breaking off into various subgroups to prevent Thanos from amassing his desired power. Iron Man (Robert Downey Jr.) and Spider-Man (Tom Holland) find themselves defending New York from a group of Thanos’ minions looking for the Time gem, the sworn protector of which is Dr. Strange (Benedict Cumberbatch). They soon find themselves on a spaceship en route to Thanos’ homeworld, Titan, to engage in an offensive. Somewhere else in space, Thor (Chris Hemsworth) meets Star-Lord (Chris Pratt) and the other Guardians of the Galaxy. They resolve to split up, with Thor, the feisty Rocket Raccoon (Bradley Cooper), and a teenaged Groot (voiced by Vin Diesel) seeking the assistance of an Asgardian weapon maker (Peter Dinklage). Star-Lord takes Gamora (Zoe Saldana) and Drax (Dave Bautista) to retrieve the Reality gem from the Collector (Benicio Del Toro) on the planet called Knowhere. On Earth, the least effective subplot finds the remaining Avengers (Chris Evans as Captain America, Scarlett Johansson as Black Widow, Don Cheadle as War Machine, Elizabeth Olsen as Scarlet Witch, Mark Ruffalo as Bruce Banner, and so on) assembling in Wakanda under King T’Challa, aka Black Panther (Chadwick Boseman), to make a stand against an invasion of Thanos’ forces. Thanos needs the final Mind gem from Vision (Paul Bettany), who has it embedded into his forehead.

Infinity War is instantly jaw-dropping, with unexpected deaths of beloved characters occurring even before the title appears onscreen. Many have speculated that Iron Man, Captain America, and Thor will meet their ends in this film, noting that the contracts between Marvel and Downey Jr., Evans, and Hemsworth have expired. Even so, the screenplay by Christopher Markus and Stephen McFeely never goes the obvious way of internet speculation, offering a constant churn of surprising developments, unexpected appearances, and profound moments of sacrifice. At the same time, the writers make use of every Easter egg and unanswered question from previous MCU entries here, such as “Whatever happened to Red Skull in Captain America: The First Avenger?” And as the film races from one action scene or MacGuffin chase to the next, it also slows down for several delicate character moments. There are genuine emotions and loss between Scarlet Witch and Vision, who have formed a subtle romance that faces almost certain destruction. Or take the charged scenes between Gamora and Thanos, her stepfather—it’s a heartbreaking dynamic in which a traumatized child recognizes her father is evil, yet she cannot help but feel something for the cruel parental figure. 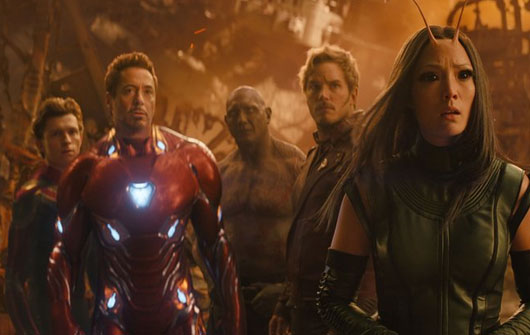 The screenplay maintains a Thanosian level of balance between its devastating severity and humor throughout. Drax’s admiration of Thor’s muscles (“It’s like a pirate had a baby with an angel!”) or Peter Parker’s use of a famous scene from “that really old movie Aliens” allows for near-constant laughs, sometimes in the same scene as something tragic. Directors Joe and Anthony Russo, whose previous Captain America entries The Winter Soldier and Civil War remain two of the MCU’s best, maintain an incredible pace and tonal dexterity throughout Infinity War. Never does the audience feel that the transitions from humor to suffering, from actionized battle sequences to intimate character moments, feel ungainly put together. The elegant and cohesive volley between various hero groups throughout the galaxy makes for an incredible forward momentum, and it leaves the viewer downright exhausted from feeling such a whirlwind of emotions in such a condensed period.

In the final scenes, Thanos’ plan comes to pass, and half the population of the universe dissolves like scorched remains lost in the wind. The faces of heroes we love disappear into dust before our eyes. Watching Peter Parker cling to Tony Stark and suddenly digress into a terrified child out of a horrible fear of death may be the most haunting moment of the film. But the level of death onscreen during this sequence must be met with some suspicion, as Marvel Studios has already planned sequels to Spider-Man: Homecoming and Guardians of the Galaxy in 2019 and 2020 respectively. Surely, in true comic book tradition, the departed will be resurrected somehow (at least, that’s the hope). Maybe there’s a clue when Dr. Strange uses his Time gem to assess the millions of potential futures before their altercation with Thanos, and then later, after he forfeits the Time gem to save Tony Stark, assures Tony that “this is the only way.” Maybe the solution resides in the post-credits stinger and its allusion to next year’s Captain Marvel. Whatever the answer, audiences must know that everyone who dies in Infinity War may not remain dead, but waiting to find out how and who comes back in the next Avengers crossover, due next May, will make for a long year.

Adopting a cliffhanger ending reminiscent of The Empire Strikes Back, except with even graver stakes, Infinity War is an impressive and daring entry in the MCU. Although, it seems to have been engineered to work for audiences familiar with the preceding films in the MCU; all others may have trouble putting the pieces together or absorbing the emotional and plot-centric shorthand present throughout the film. This is Infinity War‘s most impressive characteristic and its downfall, at least for the uninitiated few. (And really, this film isn’t for the unfamiliar.) Most remarkable is how well the Russos juggle the concurrent storylines, characters from every other MCU film, and a complex central plot, but make the result feel effortless. Never does this entry lose the viewer to third act fatigue or CGI blindness, which itself is something of an accomplishment. It’s all rather miraculous. Fans waiting for Thanos’ imposing presence onscreen will not be disappointed, nor will the way Infinity War uses him to achieve the most engaging MCU villain and film in a long while—an entry that will go down in history as a risk-taker in the superhero genre.