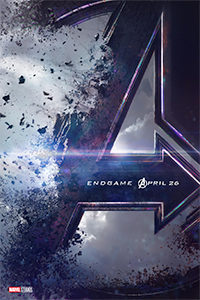 For more than a decade, the Marvel Cinematic Universe has invested millions of viewers in the fates of Earth’s Mightiest Heroes. The expansive storylines that began in 2008 with Iron Man, and continued in a half-dozen other franchises, come to a close in Avengers: Endgame, an epic reward for those who have remained invested over the course of 21 films (and a few television series). Though these superheroes began in the pages of Marvel Comics, where youngsters, nerds, and outsiders consumed them, they have since become billion-dollar franchises, transforming Hollywood in the process. The MCU has also instilled a new narrative shorthand on par with Greek mythology or The Force. Thanos’ finger-snap in last summer’s Avengers: Infinity War alone, which led to half of the universe’s population disintegrating into ash, is an image now burned into the zeitgeist, while also challenging Han Solo’s three-year carbonite nap as the granddaddy of all cinematic cliffhangers. Fortunately, Endgame lives up to its promise, sometimes in unexpected ways. But who could have anticipated that Marvel Studios and Disney would release a three-hour extravaganza whose exquisite character-focused scenes outshine the FX-driven action?

Taking the title too literally would be a mistake. Not every subplot introduced in the series comes to a conclusion in the script by Christopher Markus and Stephen McFeely. There are, after all, several other MCU sequels and projects in development in the coming months and years. (Perhaps now is a good time to mention there will be some discussion of  Endgame’s plot in the coming paragraphs; consider yourself warned that this review does not avoid discussing the plot in detail.) Suffice it to say, MCU devotees will not be disappointed, while those who have not fully committed to the entire series may feel a little lost at times. Rather than pushing forward in this latest entry, Endgame looks back in a reflective culmination of the storylines that have been swelling into a seemingly impossible size over the last ten years. It rewards an attention to detail and fastidious knowledge of all things MCU, to the extent that entire characters and scenes, some glimpsed only briefly in earlier titles, play significant roles here. Those able to keep up will feel richly satisfied.

There’s never been anything quite like Endgame, at least in terms of the monumental crossover it represents. Even so, much of the critical dissension around MCU blockbusters has been dismissive, narrow-minded, and repetitive. The franchise’s detractors argue against the commercialism of such material, preferring instead less audience-friendly titles that have a higher aesthetic value and meaning. Indeed, the term “blockbuster” has been used in a pejorative sense going back to their emergence in the late 1970s, when Jaws and Star Wars shifted Hollywood’s focus. Once Steven Spielberg and George Lucas demonstrated that a single film could make a studio, everyone sought to repeat those successes. Filmmakers and critics alike complained about the new concentration on crowd-pleasing moneymakers rooted in story, accessible characters, and universal emotions, while studios treated these properties like an elaborate marketing plan. Many, and rightfully so, questioned the aesthetic value of something so commercial—designed to sell movie tickets, toys, video games, and Happy Meals. But how are the programmed and committee-driven successes of the MCU any different than the films produced under the rigid specifications of Hollywood’s Golden Age dream factory? Yet few question the worth of classic Hollywood programmers. 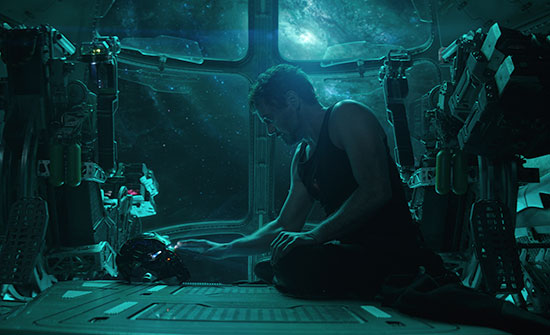 The MCU has further changed the industry in the twenty-first century. No longer does a single, self-contained moneymaker, nor even an isolated trilogy, qualify as the foremost ambition of the super-conglomerate Disney, which owns Marvel Studios. In our post-MCU reality, the ideal has been resituated to an ever-extending series of intellectual properties that crossover, intertwine, and inform one another, and the sub-franchises within them. Now several Iron Man, Captain America, Thor, and Guardians of the Galaxy sequels exist as branches on a growing MCU tree, with a canopy of 22 titles as of Endgame. Other studios have tried and mostly failed to match the uniform interconnectedness of the MCU—evidenced by Warner Bros.’s efforts with DC Comic properties and Disney’s mishandling of the Star Wars brand. Perhaps the MCU remains so unique because Marvel Comics had already perfected the notion of an extended universe on the comic book page, or perhaps Marvel Studios head Kevin Feige is some kind of audience whisperer who understands what fans want to see. The point is, Endgame is entirely unique in film history; it’s an unprecedented product, and it should be treated as such.

The cinematic debate between art and entertainment is an old discussion, and a tired one. Yet, it seems to flare up with each new entry in the MCU, inciting critics to write dismissively about superhero movies and remind their readers that blockbusters are just blockbusters, not art. But many variations of cinema can exist between the perceived poles of the arthouse and the multiplex, and many gradations and comingling may occur between them. Cinema can be more than just art films, and the experiences of art and entertainment are not mutually exclusive. There’s always art in entertainment and entertainment in art. Moreover, judging a blockbuster by art film standards, or ignoring franchise cinema altogether by suggesting it has no artistic value, represents a prejudiced refusal to engage with the material. It’s the sign of a poor cinephile when someone treats an entire type of film as lesser-than, instead of another text worth our scrutiny and consideration. Those jealously committed to the purely artistic spectrum of cinema deny that cinema is many things, for better or worse. But I digress.

After the breakthrough that was Infinity War, and the devastation felt by audiences as Thanos (Josh Brolin) used the six Infinity Stones to bring “order” to the unbalanced universe, Endgame delivers a worthy conclusion. Appropriately, this is a story that opens with feelings of defeat, mourning, anger, and acceptance related to the fallout of Thanos’ victory—something akin to HBO’s The Leftovers. Within the first ten minutes, the heroes left alive assemble to avenge the fallen, taking the fight to Thanos, who is quickly and shockingly defeated (for now). What unfolds over the next two hours sets the film apart from its predecessors. Directors Joe and Anthony Russo involve the viewer in heartening and comic moments between characters who have changed since losing their friends, along with half of the population. After five years, Hawkeye (Jeremy Renner), who lost his entire family, has abandoned his moral compass and become a Punisher-esque vigilante. Steve Rogers (Chris Evans) has tried to accept things as they are, which is not so easy for his colleagues. Tony Stark (Robert Downey Jr.) has disappeared into the woods with Pepper Potts (Gwyneth Paltrow) to start a family. Rapt with guilt, Thor (Chris Hemsworth) has changed into a rotund and beer-guzzling recluse, while Bruce Banner (Mark Ruffalo) has made peace with his green rage monster. Black Widow (Scarlett Johansson) has tried to maintain some semblance of their former team, supported by War Machine (Don Cheadle), Captain Marvel (Brie Larson), Rocket Racoon (Bradley Cooper), and Nebula (Karen Gillan).

Soon enough, things accelerate when Ant-Man (Paul Rudd), trapped inside the “quantum realm” at the end of last year’s Ant-Man and the Wasp, emerges with a plan involving time-travel and the Infinity Stones to set things right. Similar to the events in Infinity War, the story puts our heroes into various mix-and-matched groups and sends them across time and space, each with a specific mission to steal an Infinity Stone from the past and return it to the present. The setup recalls Star Trek IV: The Voyage Home (1986) or Star Trek: First Contact (1996), complete with lots of discussion about the shaky “rules” of traveling through time. Fans will note that the familiar locations and characters who appear in these time-travelling scenes offer countless MCU alumni (most notably Robert Redford, Tilda Swinton, and Rene Russo), while making reference to titles like The Avengers (2012), Thor: The Dark World (2013), and Captain America: The Winter Soldier (2014), among many others. Whether you regard these details as Easter eggs or fan service, they’re evidence of the extraordinary payoff that Endgame delivers to fans who have been watching closely over the years. But Endgame isn’t as tightly structured as Infinity War, and the time-travel logic leaves many unanswered questions about the fates of certain characters—namely, Loki (Tom Hiddleston), Gamora (Zoe Saldana), and a few others. 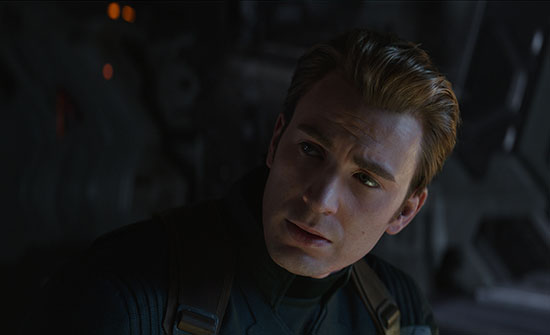 Over three hours, however, the film never drags or feels unduly protracted—it could have gone on for another half-hour without complaint from this critic. Every scene offers a new character dimension or progression, whereas the spectacle culminates with an eye-popping CGI battle so overloaded with characters and anonymous villains that it’s sometimes difficult to follow. That may have been the point of a similar sequence in Ready Player One (2018), but here, the action would have benefitted from fewer members in the throng, or at least more overall visual clarity. The action in Endgame, besides the finale’s enthralling three-on-one showdown against Thanos, is actually the film’s least compelling aspect. More satisfying is how well it treats the characters, such as the reunion between Spider-Man (Tom Holland) and his surrogate father Iron Man, or the thoughtfulness with which it says goodbye to both Tony Stark and Steve Rogers—in a perfectly satisfying, ridiculously tear-inducing conclusion. Thanos, though, has been reduced to pure evil, as opposed to the complex figure he was in the previous entry. But it’s the treatment of Stark and Rogers that elevate this superhero material to human levels, giving viewers who have spent countless hours watching and re-watching MCU titles an emotional closure. Moreover, it’s the best work done by Downey Jr. and Evans since they started donning superhero garb.

Of course, the MCU will continue for a long while, even after Endgame, leaving any comparison to the final entry of other franchises, like Harry Potter, entirely moot. It’s not so much an end as a transition. Things may be different from now on, but the story continues in Marvel’s planned slate of sequels, featured content on their streaming platform Disney+, and who knows what else. The only lingering story questions have to do with the unclear consequences of changing the past. But if Endgame didn’t leave the viewer in anticipation of the next entry in the franchise, it would be uncharacteristic of the MCU. Nonetheless, the delirious excitement and resolutions offered here make the invested viewer feel that the previous 21 entries were well worth their time. No other franchise in the history of motion pictures can say the same. Like the best titles in the MCU, Endgame is a blend of blockbuster elements, touching on an array of emotions—this is a film that makes you laugh, cry, and sit at the edge of your seat in exhilaration, corny though it may be to acknowledge. But how many other films can you say that about? It’s a rare thing indeed to evoke so much in so many people, making the film a welcome reminder of the value in blockbuster filmmaking, regardless of whether or not you consider it a lower form of art.