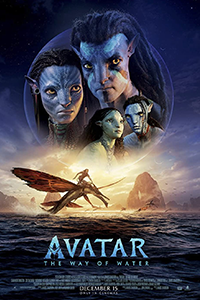 In the 13 years since James Cameron debuted Avatar to skeptical audiences, only to blow most of them away with his vision and showmanship, the doubters have again resurfaced. With over a decade to forget about his 2009 feature, which broke box-office records and introduced audiences to his vividly conceived world of Pandora, many have wondered what more Cameron could possibly have to say about the Na’vi in a sequel. Would the finished film justify him taking so long to make not only one sequel but a proposed four? But if Cameron’s previous sequels, Aliens (1986) and Terminator 2: Judgment Day (1991), demonstrate anything, it’s that he can take well-established material and reinvent what made the original so great. With Avatar: The Way of Water, the technophile director puts his considerable toolkit to work, expanding upon Pandora by exploring the much-beloved setting beneath its ocean’s surface. The sequel looks better than the original and dazzles with its photorealistic creations, from the 9-foot-tall Na’vi to the range of ecosystems on display. And while there have been, and will be more, pieces written about the advances in computer and filmmaking technology developed to complete The Way of Water, Cameron manages to keep his audience invested in an experience that outshines most of today’s blockbusters and earns comparisons only to other James Cameron movies.

Unfortunately, Cameron has distributed his movie in so many formats (Dolby Cinema, 3D, HFR, et al.) and various combinations thereof that the moviegoer may feel lost trying to make a decision. I must admit that watching The Way of Water was an unpleasant experience; though this was not the fault of Cameron’s storytelling. Instead, the prescreening I attended presented the 3D version in a Dolby Cinema in HFR (a high frame rate of 48 frames per second, double the cinematic standard of 24fps). Although the 3D effect was often stunning with a recessive depth of field, it’s unpleasant to watch a 189-minute adventure while wearing a pair of reused and blotchy 3D glasses over my everyday spectacles. Most studios have given up on 3D for a good reason; it’s an unnecessary novelty. As for the HFR effect, I’ll never understand it. Cameron hopes the “motion smoothing” effect will make The Way of Water look more realistic; however, the result makes the film look like an extended video game cutscene, or worse, your parents’ TV setup. It’s a jarring, occasionally dizzying effect that never quite settled in my brain and distracted me from the story. Selling HFR to general audiences didn’t work in previous attempts—the last major push was for The Hobbit: An Unexpected Journey (2012)—and it doesn’t work here, almost derailing my enjoyment of the movie. So if you see The Way of Water, and you should, save yourself the headache and see the 2D version or 3D without HFR. 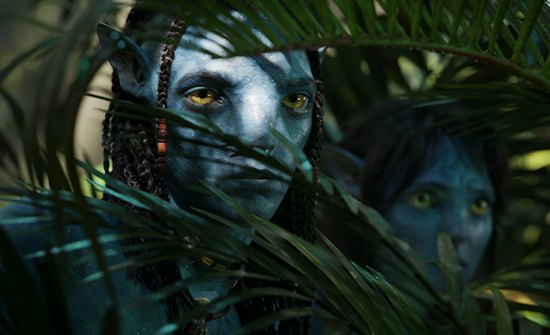 If Cameron’s large-format gimmicks prove confounding, his narrative is more straightforward. The sequel picks up with a slow start, years after the last film, with several minutes of catch-up. Jake Sully (Sam Worthington), a former human who has transitioned into a full Na’vi, has started a family with Neytiri (Zoe Saldana) on Pandora. They have three biological children, including two adolescent sons, the obedient Neteyam (Jamie Flatters) and the rebellious Lo’ak (Britain Dalton), plus a young daughter named Tuk (Trinity Jo-Li Bliss). They also parent the teenage Kiri (Sigourney Weaver), the half-human, half-Na’vi child of Dr. Grace Augustine (also Weaver), who died in the first film. In a mysterious detail, Kiri’s father remains unknown, possibly even nonexistent. After years of Jake and Neytiri raising their children in peace, the human “Sky People” return to Pandora, headed by General Ardmore (Edie Falco). A convenient bit of retconning in the screenplay—credited to Cameron and the husband-and-wife team of Rick Jaffa and Amanda Silver—finds Colonel Miles Quaritch (Stephen Lang) back from the dead and transplanted into a Na’vi body. With Quaritch out for revenge against Jake, our hero must choose whether to fight for the Na’vi people or protect his family.

There’s nothing novel about The Way of Water’s story, including its basic themes concerning parenthood and gender roles. Jake’s mostly bookend narration reinforces his family’s stubbornly traditional dynamic: Man protect family, woman nurture, and child obey. These ideals follow the Sully family to another part of Pandora, under the protection of an islander clan called Metkayina, headed by Tonowari (Cliff Curtis) and his wife Ronal (Kate Winslet). An aquamarine-skin-colored group of Na’vi with fin-like arms and tails, the Metkayina’s conception appropriates more than a few characteristics from Maori culture (facial tattoos, tongue flashing, close association with whales, etc.). After some initial reluctance, they ultimately teach the Sullys “the way of water,” such as making friends with Pandora’s resident dolphins, speaking to sea mammals, and connecting with the Na’vi spiritual entity Eywa at a submerged tree. Cameron delights in exploring this new corner of Pandora, with aquatic life as vast, complex, and extraordinary as any ocean—all rendered with glimmering light and wonder. Inevitably, Quaritch arrives and incites a conflict with the Metkayina, though it was never clear to me why he needed to find Jake after the Sullys move to a different part of Pandora. Suffice it to say, this time, it’s personal.

While Cameron’s penchant for dialogue and character dimension hasn’t improved much since Avatar, his sequel contains several inspired details. For instance, there’s barely any mention of “unobtanium,” the original film’s metallic MacGuffin. In its place, the humans want a substance derived from whale-like creatures known as tulkuns—superintelligent beings that maintain close bonds and have conversations with the Metkayina. Quaritch teams with a band of human whalers to hunt the tulkuns and draw out Jake, resulting in a scene that will prove difficult for some to watch (even though the tulkuns are CGI creations, they look tangible and earn an overwhelming amount of sympathy). Elsewhere, an inspired subplot features Lo’ak bonding with a tulkun, giving way to the most wowing action sequence and affecting story thread. In this, Cameron wins over his audience with simple pleasures, such as cathartic scenes of the Na’vi annihilating colonizers and whalers. Cameron manages to keep the viewer rapt, even though the story has dull ideas about a father’s responsibility to protect his family and the relationships between fathers and sons. This extends to the villain as well. In a tedious subplot, Quaritch attempts to bond with his human son, Miles (Jack Champion), who prefers Na’vi to humans. 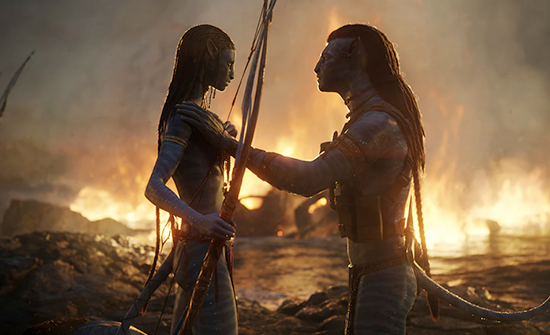 Whatever the story’s flaws, Cameron remains a master of cinematic splendor. At any moment, the artificial world before us contains a million beautifully realized details, from skin texture to sunsets to bioluminescent algae. Since most of the actors worked through motion-capture technology, few have distinct enough features and physical performances to carry through their digital costumes. Still, Weaver’s presence as the teen Kiri remains the standout, with Cameron clearly establishing the character as a Christlike deity of sorts. Of course, Cameron knows how to build a world and uses every established detail in service of his breakneck action. The Way of Water is no exception. Whereas the first half amounts to buildup, the second half plays like a thrillingly, exhaustingly long action sequence with plenty of familiar visual motifs for Cameron—a capsizing ship (Titanic), underwater angels (The Abyss), flooding corridors (Titanic, The Abyss), large robotic exoskeletons (Aliens), and even a shot below the water looking up at fire on the surface (True Lies). The sequel sometimes feels like a highlight reel of Cameron’s favorite moments from his career. In a way, this makes The Way of Water feel personal, like Cameron pouring himself into a refined take on his original Avatar and making a version that, in many ways, works much better as a story. It’s a welcome alternative in megabudget filmmaking to the anonymous MCU house style that has dominated the multiplexes since 2009.

Cameron only makes event movies. They remind us why the theatrical experience cannot be bested, regardless of your home theater setup. But unlike his earlier work, neither the original nor The Way of Water boasts memorable characters that will live forever in our hearts. They are not beloved in a manner that makes us anxiously await their next appearance because we must know what happens to them, which is perhaps why the 2009 film has lost so much cultural cachet in the last 13 years. Rather, the Avatar movies promise spectacle on a superior scale, and on those terms, The Way of Water delivers. Much popcorn will be munched. Many eyes will be popped. But after the movie reached its climax, with about 10 minutes of falling action to close out the story, people in my screening packed up and left. They knew the showman had no more tricks or spectacle to offer, only some pesky character scenes, and these moviegoers weren’t interested. The experience is rooted in the visual, while everything else is an afterthought—to the extent that one must admire Cameron’s simplicity and skill at delivering so splendidly on that level alone. Although the sequel is overlong and light on complex characters, it’s 2022’s most impressive-looking blockbuster.