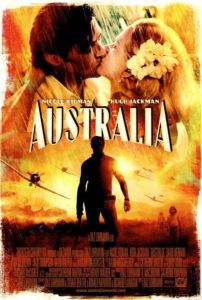 Baz Luhrmann’s Australia doesn’t take itself seriously but expects audiences to feel a connection nonetheless. Unfortunately, the film attempts to evoke emotions it can’t muster, and would rather spend its time pretending to be Golden Age classics. Presented with grandiose cinematography, dramatic characters, and an epic plot involving the identity of a whole country, the film also bears an uneven tone, uses too much obvious computer animation to illustrate its visual magnificence, and leans on a screenplay with no direction. Without a moment of restraint, the result is a product of self-indulgence in the worst possible way.

Throughout the nearly three-hour film, we’re most interested in the fate of Nullah (Brandon Walters), an aboriginal boy whose father was white. He takes to Lady Ashley, who cannot have children herself, and so attempts to care for the child like a mother. As recently as 1973 when the practice was banned, Australian officials “apprehended” part-white aboriginal children for “reprocessing” into white homes as servants, to “have the black bred out of them.” For the endearing Nullah, who also narrates the film, he’s at odds between his dedication to Lady Ashley, his avoidance of the “coppers” that will take him away, and whether or not he’s ready to go on walkabout with his grandfather King George (David Gulpilil, from Nicolas Roeg’s Walkabout). Presented as a metaphor for how Australia’s European settlers eventually merged into the local population, later becoming whole by their unification during WWII, the film’s story has potential that is squandered on uncertain directing.

These plot elements are gathered into a hodgepodge of sewn-together parts invented by other, better directors. Luhrmann’s influences come from the top names in grand romantic epics, striving for similarity to John Ford’s The Searchers, David Lean’s Lawrence of Arabia, and the mother of all epics, Gone with the Wind. Fans of those classics might play a game where they identify which scenes Luhrmann steals from which film. The outcome, assembled by a modern-day Dr. Frankenstein, is an expertly polished monster that awakens without visible stitches and nasty scars, but like any plastic surgery case, it’s evident they’ve been pieced together artificially.

Take, for example, Luhrmann’s insistent use of The Wizard of Oz. His characters are dreamers seeking out the seemingly impossible—be it to create a family, to restore Faraway Downs, or to find their place among the distinct cultural Selves present in Australia. Relating their dreams to the song “Over the Rainbow”, contemporary for the film’s setting, becomes the theme. But it’s already the theme of a classic movie. Hence, Australia cannot be its own film; too many exist inside it already.

Luhrmann’s had his eye on this production for years, laboring in love to create a massive film that would encompass his homeland’s cultural identity. Directors occasionally lose sight of their vision in the presence of a project this colossal and hopeful. Too often filmmakers seek out their dream projects mid-to-late career and find, because they struggle less now that they’re successful, the end product is not the film they once envisioned. Case in point, Martin Scorsese wanted to make Gangs of New York since the 1970s; when he finally did in 2002, the result was not only his biggest disappointment, but nothing about the picture aligned with his established style or adherence to his own brand of verisimilitude. The same can be said for Oliver Stone’s Alexander. And, of course, Australia is the latest example of what happens when directors try too hard.

Another problem is Luhrmann’s off-putting and uneven tone. Early scenes contain wild and zany, emotionally cartoonish antics like something out of his tragically overrated Moulin Rouge!, whereas later that playful tone abruptly disappears. By the time he expects us to take the film’s events seriously, any potential for emotional connection is lost. Perhaps he was hoping to ease the audience in with humor. Certainly Gone with the Wind began with frivolities, aimed with seriousness, and fired with perseverance through historical tragedy. Where the two differ is Nullah’s narration throughout, which sets up the conflicts for each act as opposed to letting the melodrama unfold naturally and progressively, and fails to create any interconnectedness for the story’s episodic structure.

Benefited from casting Australian performers, luckily Luhrmann has Jackman, Kidman, and newcomer Brandon Walters (left) to fall back on. Jackman replaced Russell Crowe when Crowe backed out, giving the role of Drover that singular sexy Western hero element few can pull off, and then also offers extraordinary acting range as a bonus. Kidman might be in too deep, as she’s unable to capture the presence and strength needed for this type of role; unlike Vivien Leigh, she cannot make the transition from snooty prissypants to honorable heroine. Most impressive is Walters, the adorable youngster who projects innocence with equal parts simplicity and substance.

There’s undeniable beauty here, except unlike those epics from which he steals, Luhrmann doesn’t know when to dwell on that beauty. Cuts are fast. Not Michael Bay fast, but limiting in their capacity to involve us. Epic filmmaking relies on soaking up the audience into the vast world presented onscreen. Lurhmann is noted for his post-modern speed and lighthearted spin; such impatience doesn’t suit his story or epic movie intent. Australia loses us from time to time, while wholly enthralling us at others. Overall, the scheme doesn’t work, playing out like two or more storylines tagged together, when focusing on one, specifically the tale of Nullah’s self-discovery, could easily capture our hearts.