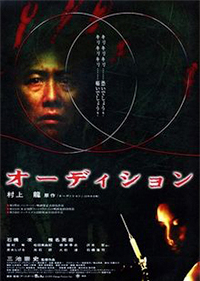 The cinema of revulsion is determined to cause the viewer feelings of nausea and disgust, the result of which shapes a moral perspective from unavoidable psychosomatic reactions. When the body has an extreme negative response, the mind cannot help but associate that with an emotion or idea. Takashi Miike’s Audition hopes its displays of abject torture will incite the viewer to look beyond its glossy surface and locate a message about gender politics, cultural identity, and seduction. Indeed, it could be argued that the 1999 film, adapted by Daisuke Tengan from the 1997 novel by Ryû Murakami, investigates seduction in terms of romantic and sexual relationships. But more so, it radiates with the seduction of violence—its reputation as the premier Japanese torture film of the New Asian Cinema movement is undeniable after the slow-burning structure takes 90 minutes to reach a horrific, unforgettable finale. Although it’s shocking and thought-provoking, Audition uses its excessive violence not to evoke a clear intellectual response but to sear revolting images on the viewer’s brain. Using piano wire to cut into its themes, the film allows for countless interpretations, which is normally an exciting trait about any film. But Miike never instills a moral imperative, and the only thing certain about his film is its fascination with grotesque violence.

Miike got his start in Japan making bloody direct-to-video horror and yakuza movies with titles like A Human Murder Weapon (1992) and The Way to Fight (1996). Though he’s also responsible for adapting Japanese manga and creating pop-star showpieces, his penchant for gory utlra-violence and stylistic surface polish has led to scholars arguing that there’s something beneath the surface. But Miike operates in what writer Aaron Gerow calls “cinematic and narrative excesses,” a familiar quality of New Asian Cinema as it ensures the outcome will not be ignored. If the violence is graphic enough that people talk about it, word-of-mouth spreads. This model has provided successful, guaranteeing financial returns, especially when such violent Asian films were marketed in the West as “Asian Extreme” and garnered a cult following. With films ranging from the splatterfest Ichi the Killer (2001) to the historical samurai actioner 13 Assassins (2010), Miike resists falling into a stable category, but he’s not embracing high artistic ambitions either. As Gerow notes, Miike’s films “cannot take a stand against a particular cinema or social issue, and thus fall into cynical ‘anything goes’ pessimism.” 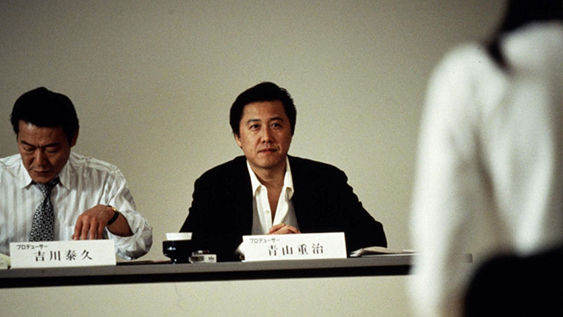 Audition articulates the notion that Miike doesn’t have an ideological stance, per se, yet he makes films about characters and situations that cannot be ignored. Though much of the film opens with a critique of masculinity and female oppression in Japanese society, any hope at a coherent message is strained by the final scenes. The story follows widower Aoyama (Ryo Ishibashi) and his teenaged son Shigehiko (Tetsu Sawaki). Aoyama has been alone for several years and wants to remarry. But he suffers from a common condition: “All Japanese are lonely,” he remarks. Loneliness, and the inability to communicate with women, is a shared trait among Japanese men according to Aoyama, which is why his sleazy coworker Yoshikawa (Jun Kunimura) arranges a casting call for a faux TV movie, and unbeknownst to those who audition, they’ll be in the running to become Aoyama’s new wife. Yoshikawa hands Aoyama a stack of résumés and tells him to choose 30 to audition, and Aoyama proceeds to look through them, or their headshots anyway. “It’s like buying a car,” Yoshikawa insists. After making his selections, we see them displayed in a montage in which Yoshikawa and Aoyama ask the female candidates a series of humiliating questions about their experience acting, time in front of a camera, and knowledge of the sex industry.

Aoyama is drawn to Asami Yamazaki (Eihi Shiina), her fatalistic views on life, and her demure beauty. Although inconsistencies on her résumé raise a warning flag with Yoshikawa, Aoyama nonetheless plans to court her. Meantime, Miike cuts to Asami waiting by the phone in her empty apartment. The viewer spies a large tied sack in the background. Asami sits like a dormant insect, her body hunched until she smiles from behind her draped hair when the phone rings. She knows it’s Aoyama calling. If that weren’t enough to raise our suspicions, something inside of the sack moves. Is it an animal? A person, perhaps? Any possibility is too scary to consider. After an initial rendezvous, Aoyama plans to propose during a weekend getaway, but Asami suddenly disappears, and he begins a search. Using the information on her résumé as a guide, he learns several disturbing details about Asami’s past, from the lies she’s told to the potential carnage she’s caused.

The film culminates when she arrives at his home, and Miike shoots her arrival like a Deadite racing through the forest in The Evil Dead (1981). Clad in a leather getup and armed with a syringe and piano wire, Asami drugs Aoyama to paralyze him, yet he retains consciousness so that he might “still enjoy the pain.” The most inspired sequence of Audition unfolds as Aoyama hallucinates from the drug, and the psychosexual result pieces together aspects of the plot and Aoyama’s history of female exploitation. It’s around this time that Asami uses the piano wire to cut off his feet. Amid her victim’s screams, Asami loses herself in memory, thinking about how her ballet instructor tortured her, and how, from this source of pain, she retaliated on several men in her life—including one she keeps in her sack. Although Aoyama survives due to a last-minute rescue by his teenage son, the scars of the incident will remain forever. 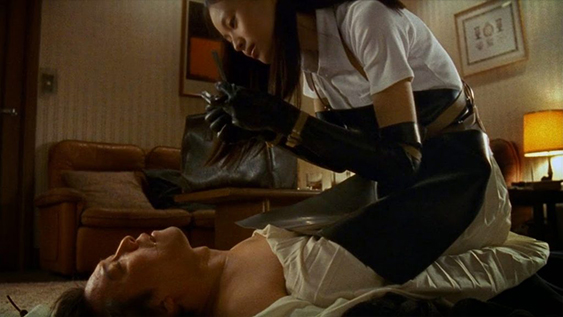 On the face of it, Audition seems to critique men who abuse and take advantage of women, offering a scenario in which one such objectified woman exacts horrific revenge. If that’s all the film was about, it would be a welcome alternative to the slasher trend of a masked man killing female victims because of his own masculine shortcomings. It might be that Miike offers a critique of chauvinistic behavior, as though he’s saying, Treat women with respect, or else you might create a monster and worse, you might fall prey to her. Notice how, according to Aoyama and Yoshikawa, the traits of a good wife—or further, the value of a woman—amounts to the quality of “her beauty” and “obedience.” To be sure, Aoyama and Yoshikawa exploit women in their casting call rouse, and their behavior elsewhere in the film is despicably misogynistic. This perpetuates Asami’s belief that “all guys are the same,” even though Aoyama is looking for a long-term companion, not an easy sexual conquest. Nevertheless, Audition isn’t a film that teaches its male viewers a lesson about respecting women to reinforce positive perceptions. Rather than a cohesive statement about gender dynamics, the purpose of Audition seems to come from a simple line of dialogue: ”Isn’t it a terrible world?”

The gendered situation in Audition is merely a pretense for Miike’s brand of J-horror, where he indulges in stylistic excesses to shock his viewers. The director employs long takes that dwell on the violence, forcing the viewer to endure excruciating or disgusting moments to awaken a reaction. He shows close-ups of bloody wounds or, in one scene, Asami’s grotesque male slave slurping from a milk dish, with fetishistic detail. Such excesses are not inherently bad or lower forms of art; however, Miike’s formal control, particularly in his patient visuals, tends to suggest that his films have greater substance. But listen to the comically bland score throughout Audition, or the conclusion’s ungainly series of fantasy images and dialogue that suggest Asami’s status as a victim, as opposed to a monster. After all, Asami doesn’t limit her masochism—punctuated by her line “Deeper deeper deeper,” which sounds vaguely like “here, kitty-kitty,” as she inserts long needles into Aoyama’s face—to men alone. Consider Aoyama’s adorable Beagle named Gang, a kindly and unintimidating presence in the household throughout the film. Asami disposes of the dog when she first arrives to torture Aoyama. If Audition were merely a tale of female revenge against male chauvinism, then why kill the dog if for no other reason than pure cruelty? Perhaps this is a good time to mention that Audition was a major influence on the “torture porn” trend of the early 2000s.

Chuck Stephens wrote in Film Comment that Miike is not “a director much given to pensive or reflective moments,” nor is he concerned with “Japaneseness, or the entire churning globe.” There’s a nihilistic streak in Miike’s films, coupled with nasty gore effects and things you cannot unsee, lending his work to cult viewership and praise for its many transgressions and revulsions. Even so, Audition is often viewed as a standout among his films because he thoroughly develops Aoyama and delays Asami’s frightening scheme until the finale. Moreover, it has been widely read from both female- and male-positive perspectives—and both would be apt, since Miike doesn’t seem too concerned about his message or themes. Instead, he uses obvious triggers to create frightening, horrific stories of extreme style and content. But it’s impossible to ignore a film like Audition, impossible to look away, and impossible not to feel rapt in the proceedings. Whether or not it bears some larger sociological message is perhaps not important next to the undeniably visceral reaction it arouses, which would not be the case with a lesser filmmaker or lesser film.

(Editor’s Note: This review was commissioned on Patreon. Thanks for your support, Andrea!)