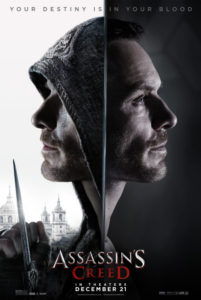 Assassin’s Creed belongs on the January release calendar, packed somewhere between the latest Underworld and Resident Evil sequels. Instead, it opened amid a dozen awards contenders in the hectic 2016 season. The 20th Century Fox release boasts a price tag of around $130 million, so it’s too costly to be considered a product of mere counter-programming against the more esteemed fare overcrowding theaters. Rather, the filmmakers set out with lofty ambitions to elevate the “based-on-a-videogame” genre to award-worthy heights. Australian director Justin Kurzel commands a roster of modern thespians in this strikingly self-serious science-fictioner. Reteaming with stars Michael Fassbender and Marion Cotillard from his 2015 adaptation of Macbeth, Kurzel brings a certain degree of class to the proceedings; though, he cannot shake many of the downfalls associated with videogame movies.

A passion project for Fassbender, who also produced and provided significant creative input, Assassin’s Creed comes from the Ubisoft game series that debuted in 2007. Having resulted in nine games in as many years, the popular franchise was bound to hit theaters eventually. Who knew that an actor of Fassbender’s caliber would make it happen? Given the maligned history of videogame adaptations, Fassbender sought to class-up the production by hiring an unlikely director and wrangling actors typically associated with more prestigious material. He set up the project at Fox, where he’s well-established after playing Magneto in their X-Men franchise, as well as his role in Ridley Scott’s Prometheus and upcoming Alien: Covenant. Despite all of his ambitious engineering and hopes of defying the truism that videogame-to-film adaptations are usually awful, Fassbender’s production proves every bit as schlocky as Max Payne or Angelina Jolie’s Tomb Raider titles.

Indeed, screenwriters Michael Lesslie, Adam Cooper, and Bill Collage turn every character into a plot device, whereas pesky notions of human drama have been set aside entirely. Fassbender plays Callum Lynch, a modern day criminal who awakes after his faux execution to learn he, and dozens of other former prisoners, have been saved by Abstergo Industries scientist Sophia Rikkin (Cotillard). Sophia and her father (Jeremy Irons) belong to the Knights Templar, a secret order in an age-old pursuit of the Apple of Eden, the film’s MacGuffin. Supposedly, the apple-shaped metal device was created at the beginning of time and holds the key to human DNA. The Knights plan to use it to control freewill and stop violence, a well-intentioned albeit evil scheme. But another clandestine group, called the Assassins, believe that “everything is permitted” to preserve freedom, including the freedom to commit acts of violence, and they have fought the Knights for centuries to maintain that idea.

Seemingly caught between the Knights and Assassins, Callum believes his father (Brendan Gleeson) was a crazed Assassin who murdered his mother (Essie Davis, from The Babadook). Holding that grudge, he agrees to help Sophia attain the Apple of Eden by entering the DNA-memory of his 15th century ancestor, Aguilar (Fassbender again, behind darkened hair and facial tattoos). Strapped to a machine called the Animus, Callum experiences the past through ghost-like images created by Abstergo hologram projectors. While inside, he learns the secret location of the Apple, but he also learns of the Knights’ tyranny and their plans to control the world. Fortunately, Callum gains the roof-jumping, hood-wearing, knife-wielding skills of an Assassin by proxy. He soon realizes he belongs on the side of the Assassins and, together with the other Abstergo prisoners like him, he resolves to organize a revolt against the Knights (headed by Charlotte Rampling).

If this doesn’t make much sense to you, know that Kurzel’s brooding, internalized work often appears through a literal or figurative haze, which doesn’t help matters. In Snowtown, the psychological inscrutability maintained by Lucas Pittaway leads to murder, while in Macbeth everything appeared through smoke and the mists of Scotland. He brings a similar approach to Assassin’s Creed with the help of cinematographer Adam Arkapaw, shooting the film’s scenes set during both the Spanish Inquisition and present day with equal amounts of CGI smoke and smog to prevent a clear view of the action. And since the story combines The Matrix with Prince of Persia, there’s lots of martial artistry and parkour to be obscured. Along with editor Christopher Tellefsen’s hack-and-slash approach to cutting, the film might be wholly unintelligible, if not for the outstanding cast to draw our gaze. Too bad they don’t have anything interesting to do.

The action consists of hand-to-hand combat and elaborate chase-fights atop ancient Spanish buildings. The Assassins stage their attacks by leaping from rooftops and bouncing off walls—stunts delivered with computer-generated silliness. Elsewhere, the film transitions between the past and present by using the visual device of a CGI hawk, whose purpose may be apparent only to players of the game. Having played just a few hours of the original game, I cannot speak to how well the material has been translated to film, except to note that Assassin’s Creed is a mess both narratively and formally. Consider the final fifteen minutes, which seemed to have that “motion-smoothing” effect you see TVs using on the Big Box sales floor. Maybe this was just my screening’s projector, but the film’s climactic sequences appear to be set to a rate higher than 24 frames-per-second—a distractingly paced speed not suited for cinema. It’s almost as thought the film wanted itself to end.

Though Kurzel’s general fogginess lends the story atmosphere and speaks to the film’s themes about clandestine cults operating in the shadows, it also prevents the viewer from making a connection to the film. Of course, poorly developed characters don’t help, not even if they are portrayed by some of the best actors working today. Despite the film’s conceits to be “the best based-on-a-videogame film ever made,” something like this year’s Warcraft puts it to shame. To be sure, Assassin’s Creed falls in line with its forgettable predecessors, making films with lesser ambitions look superior by contrast. Within the first moments, when a computerized hawk soars over computerized crowds and landscapes to heavy metal guitars, the viewer knows the film won’t transcend the limitations of the subgenre. And over the next two hours, it doesn’t get any better.