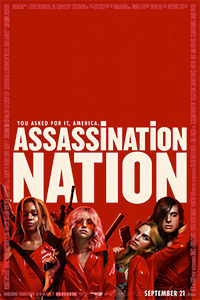 In a desperate attempt to be edgy and button-pushy, Assassination Nation opens with a disclaimer of sorts, advising the audience that the ensuing film will contain a number of “trigger warnings” bound to upset susceptible viewers. Guns, attempted rape, misogyny, nationalism, pornography, and various explicit acts of sex and violence make the list, therein entitling the film to treat such potentially offensive content as part of a critical text. It’s hardly incisive, though, as signaled by its use of energetic filmmaking over thoughtful social awareness. Writer-director Sam Levinson’s film attempts to offend everyone and, in doing so, exposes the ugly side of American culture perpetuated by social media and technology—but more so by our own self-righteous mob mentality to attack people when they’re down. Specifically, the film cuts into our culture of thoughtless, reactionary outrage and character assassination.

It’s a bacchanalia of bad behavior in a small town where residents’ smartphone files have been made public by a local hacker, exposing their deepest, darkest secrets, browser histories, and illicit pics. It starts when the public accesses the files of the local mayor (Cullen Moss), whose platform has a firm anti-LGBTQIA stance, whereas his personal photos reveal an incongruous private lifestyle. After his personal life is aired for all to see, and the masses call him a pervert and demand his resignation, he responds with a public suicide. The modern equivalent of poison pen letters doesn’t stop there. The high school principal (Colman Domingo), for instance, has his life ruined when it’s revealed he has innocent pictures of his young daughter taking a bath on his phone (something every parent probably has of their child), and the enraged townspeople assume the worst. Due process be damned.

Eventually, the four teenage girls (Odessa Young, Hari Nef, Suki Waterhouse, and Abra) at the film’s center get blamed for exposing the personal files of everyone in town. Everyone can see everything about everyone. No one’s happy about it. The teen foursome is hardly a group of innocents free of shameful behavior. One of them has been sharing nude photos with an adult neighbor; another one has cheated on her boyfriend. Various other offenses saturate the group. “But who among us is innocent?” the film seems to ask. The point is not the moral lines people walk, but the way people in America judge, react, and publically condemn when they see behavior they don’t agree with. Levinson typifies this sort of reaction as nationalistic, jealously religious, toxically masculine townsfolk team-up—everyone from jocks to cops—to exact vengeance for the assassination of their lousy public reputations. The girls respond by arming themselves against the outraged, masked, mostly male crowds. A bloodbath ensues.

Despite exploring such dark and unsavory aspects of American culture—our obsession with social media, our intolerance, our need to crucify people for their mistakes—the film conspicuously overlooks a potential target: transgender prejudice. A teen transgender character named Bex, played by the model Nef, is somehow never misgendered by the intolerant crowds. When she’s eventually tortured and nearly hanged by some right-wing psychos, they shout “Hang her!” and get the pronoun correct. Given the entrenched American intolerance that Levinson seeks to exploit, it seems odd that he wouldn’t expose a rampant strain of transphobia reeling through the country at present. As a result, the issue of misgendering is never raised, which seems far too optimistic for such a cynical film.

Similarly, in his attack on American outrage culture, Levinson somehow never raises the issue of teens using gun violence as a solution to intolerance. It’s an irresponsible detail that’s more troublesome than it was in the similarly critical God Bless America (2011), Bobcat Goldthwait’s black comedy in which two armed, fed-up citizens decide to blow away cultural criminals—people who talk at movies, reality TV stars, etc. Assassination Nation is the kind of film that raises questions about the ethics of filmmaking, whether telling this story does more harm than good. Violence for the sake of satire can be effective, but there are scenes late in the film that suggest that those punished with gory retribution by our teen heroes have gotten what they deserved. It’s the same outcome of The Purge movies—they set out to be critical of America’s violent tendencies, but all they’ve done is attract viewers who embrace the series’ penchant for elaborate killings. Then again, even filmmakers with the best of intentions can’t control how an audience reacts.

Shot capably enough with lively cinematography by Marcell Rév, the film’s showmanship and generally excessive quality define Levinson’s approach as more style than substance. Most of the performances are strong, but the storytelling and sociopolitical satire feel garbled. Levinson desperately wants to make the Natural Born Killers or Fight Club for Generation Z. But like those films, it contains no end of mixed messages in a journey toward cultural and media criticism. In the end, no matter how welcome or apt its themes against outrage and intolerance may be, the film either overlooks or doesn’t adequately address America’s other big problem—violence—aside from an on-the-nose historical allusion. Note where the film takes place: Salem, Massachusetts. To be sure, the whole thing wants to be clever and insightful, but also radical and offensive to get your attention. It’s never less than painfully obvious.