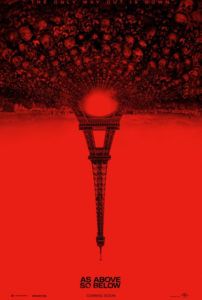 By the late eighteenth century, the Paris government’s practice of burying their dead within the city walls had resulted in overflowing graveyards, not to mention some offensive smells and valid health concerns. To solve the problem, city planners began a massive project to transport over six million bodies into newly reinforced catacombs beneath the streets of Paris, deep in subterranean tunnels originally carved for limestone mines. Now a tourist attraction, the skull- and bone-lined necropolis under Paris makes an inherently spooky setting for the “found-footage” programmer As Above, So Below, a claustrophobic blend of Tomb Raider and The Descent combined in the formal trappings of The Blair Witch Project. Fulfilling its B-movie requirements with ample jolts and tension throughout, the low-budget production boasts a diverting storyline and some fun, cheap thrills for casual late-night viewers.

The brothers Dowdle, director John Erick and his producer Drew, co-wrote the screenplay. And this is their third go-round with the “found-footage” subgenre, after their undistributed The Poughkeepsie Tapes and successful Quarantine, the latter a remake of the Spanish-language shocker [Rec]. To be sure, the Dowdle brothers have proven themselves in the wobbly, faux-documentary style. Here, their movie stands out from the dozen others like it with an inherently chilling setting and a rather interesting backstory. The movie opens in Iran, where pretty British scholar Scarlett (Perdita Weeks)—whose various impressive credentials include two PhDs and training in Krav Maga—seeks clues to her late father’s lifelong search for legendary alchemist Nicholas Flamel’s Philosopher’s Stone (that’s right kiddies, it’s not just part of Harry Potter lore), which is said to have healing properties and turn base metals into gold.

All signs point to its location in a series of forgotten, unmapped sections of the Parisian catacombs. Our heroine decides to rush down there headlong, joined by her estranged lover-sidekick George (Ben Feldman), cameraman Benji (Edwin Hodge), scruffy French guide Papillon (Francois Civil) and his two sidekicks, Souxie (Marion Lambert) and Zed (Ali Marhyar)—several of them sporting head-mounted cameras. But once they move beyond where normal tourists and explorers have gone, they come across a group of topless weirdo women in the midst of a séance, eerily chanting in a candle-lit hall. Oh well, says Scarlett’s group, and they continue onward. But at this point, a red warning light would flash in your brain and mine, and we’d say enough-is-enough and turn around. Not Scarlett. She’s determined to find the Philosopher’s Stone, enough to keep trudging through forbidden hallways, booby-trapped puzzles, and an arch that ominously reads, “Abandon all hope, ye who enter here.”

Scarlett’s irrational push forward is what makes her heroic, and what makes As Above, So Below a movie. And just as Chronicle used the subgenre to create superheroes, the Dowdles use it to tell a familiar adventurer story, albeit saturated in supernatural horror. Weeks serves the screen well, though her character has been cut from a clichéd fortune hunter cloth—a fearless leader who pushes through moments where everyone else panics and screams. All she’s missing is a smarmy sense of humor. As Above, So Below isn’t as exciting as an Indiana Jones adventure, doesn’t quite meet the standard Uncharted yarn, but most of those dreadful Angelina Jolie Tomb Raider movies could learn a thing or two from the plot surrounding the central MacGuffin.

After being entombed by a cave-in, Scarlett’s group is told “the only way out is down,” and so they keep going further and further down “halfway to Hell”. Meanwhile, the characters experience personalized hallucinations and apparitions that have been conveniently, and briefly, set up earlier on. One character sees his dead brother, another is haunted by a fiery specter, and Scarlett’s suicidal father shows up too. Each feels like a half-hearted attempt to add some dimensionality to the script’s thin characters. But such surreal sights are never more alarming than the tangible dangers of cave-ins and squeezing through a passage on a pile of human femurs; elsewhere, “the Mole” (Cosme Castro), a guy caught in this underground labyrinth for two years, proves unnerving.

It’s all familiar stuff, but it’s done well. A few scenes shot by cinematographer Leo Hinstin in the actual catacombs render the movie’s shaky-cam visual presentation a bit more believable, a bit more confined, and our breaths a bit shorter. But then, credibility and realism aren’t the goals here, as evidenced in the wraithlike hooded figures and demons aplenty; alchemy and magic play significant roles too, and they feel unique to the “found-footage” setup. Unfortunately, the movie’s rushed third act degrades into choppily edited scenes of screaming and running down pitch-black passageways, complete with blink-and-you’ll-miss-it shots of ghosts (or whatever they are). Just in time, the neat final shots redeem As Above, So Below, and fortunately, it avoids that all-too-common abrupt conclusion that usually accompanies this sort of thing. Overall, the movie rushes by and provides some visceral scares throughout, especially for those interested in its historical and mystical contexts.

(Editor’s Note: This review has been updated to reflect Scarlett’s butt-kicking skills in Krav Maga, not Capoeria.)