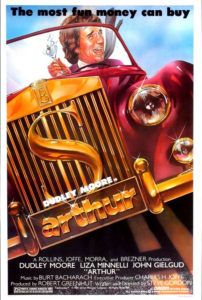 Arthur has been considered one of the funniest movies ever made. It earned a spot on the AFI’s “100 Movies… 100 Laughs” list, and remains fondly remembered by the generation of moviegoers who saw it in 1981 and made the comedy a box-office hit. Writer-director Steve Gordon reinvented and expanded on the lovable drunk comedy bit into a feature wherein a silver-spooned protagonist enjoys various degrees of intoxication while laughing at himself. There’s nothing worse than a bumbling drunk who thinks they’re the funniest person in the room, and watching this movie’s drunk, played by Dudley Moore, fresh off the success of 10, proves just as grating as the real thing. The experience today is further marred by thirty years of “progress” that suggests—get this—alcoholism is a disease and no laughing matter.

Gordon’s update of P.G. Wodehouse’s Jeeves and Wooster routine—where a stiff gentleman picks up after a sloppy drunk, laying down occasional bits of dry sarcasm along the way—has not one ounce of comic subtlety, at least when it comes to Moore, who plays said sloppy drunk. Luckily Moore’s eponymous character is followed by his faithful servant and only friend Hobson, played by John Gielgud, a master thespian in the Olivier sense (as opposed to the John Lovitz sense). Gielgud’s handful of scenes and memorable quips are downright hilarious and perhaps the only moments from the movie worth remembering, whereas all else falls into the “other” category. Indeed, with another Lovitz nod, it must be said that Moore’s Arthur character was funnier on Fox’s short run animated spoof The Critic (a cartoon Arthur looks at a jar of tongue depressors and remarks, “Doctor, somebody ate all your popcicles!”).

This fun-loving romp begins with Moore’s drunken heir picking up a prostitute, treating her to dinner, and then bedding her. What could be more appropriate for the movie’s PG audiences? Turns out Arthur’s parents have arranged him to marry heiress Susan (Jill Eikenberry), a woman he doesn’t love. He pretends to fight it, but he wants his $750 million inheritance too much to walk away—that is, until he meets working-class waitress Linda (Liza Minnelli). He and Linda instantly fall in love, with her completely indifferent to his boozing and Playboy reputation (which, I must remind you, includes no end of prostitutes). But then Arthur is forced to choose between oodles of money and the love of his life. At that moment, servant Hobson’s frozen exterior melts, and he influences the drunkard to choose love over money, which, of course, inspires his grandmother (Geraldine Fitzgerald) to keep Arthur in the will. Through it all, Moore upholds slurred speech and tipsy behavior, interrupted by a rare moment or two of sobriety.

This is comedic fantasy at its most deplorable. Never does anyone ask Arthur why he drinks, what he’s running from (if anything), or worry that his enduring alcoholism will have physical penalties in the years to come. Gordon’s story doesn’t even bother sentimentalizing the finale, in that he gives the spoiled Arthur everything—the girl, the money, and his blithe drunkenness—all wrapped in a tidy bow. A more dignified conclusion would have found Arthur giving up drink, getting a job, and leaving his former life for a normal life, yet still finding happiness. But with that conclusion, audiences would have been without the 1988 sequel, Arthur 2: On the Rocks, which Moore has since disowned. Brief moments of hilarity come more from Gielgud’s pitch-perfect stodgy British butler (his performance earned him an Oscar for Best Supporting Actor) and Linda’s money-hungry father (played by Seinfeld’s Barney Martin) than Moore, whose act grows tired before he has time to stumble out of bed.

Roger Ebert wrote in his original review that “Only someone with a heart of stone could fail to love a drunk like Arthur Bach.” Well, I didn’t love Arthur Bach or this movie, so call me a mineral-hearted cynic. I’m proud of it. Arthur may have worked in 1981, when the awareness of alcoholism and sexually transmitted diseases weren’t as sharp as they’ve since become. But it’s a testament to a movie’s timelessness when it transcends period, and Gordon’s movie is without a doubt a product of 1980s excess that relishes money, sex, and substance abuse. And while it’s understandably meant “all in good fun”, the behavior just grows tiresome, the jokes stale, and the central performance unrelentingly obnoxious. To be sure, this opinion is a minority one. So be it. I suppose I’m the type at the party who, while everyone else is laughing at the insufferable blathering of a loud drunk, is instead feeling equal measures annoyance and pity for the poor fool.