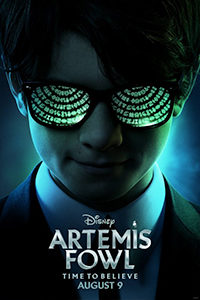 Having never read Eoin Colfer’s young adult book series, I felt at an immediate disadvantage when I sat down to watch Artemis Fowl on Disney+. Within the first few minutes, director Kenneth Branagh’s megabudget franchise-starter hastily blasts through names and exposition: Some thingamajig called an “Aculos” goes missing. The titular character, a 12-year-old genius with a chip on his shoulder, learns that his father’s fairy tales might be true. There’s talk about a magic world just beneath the surface, and more talk about a dangerous mission to recover the MacGuffin. Regardless of how commonplace this sounds, I felt lost. Not one compelling character had been introduced, not one inspired idea. Utterly confused and disinterested, I soon realized that the problem wasn’t my lack of experience with Artemis Fowl. It was the movie. Regardless of the viewer’s familiarity with the source material, a movie should translate its appeal to the screen. But there’s no magic in this high-tech fantasy, a blend of futuristic gizmos and ancient mythological creatures in a silly, amateurish package.

The movie opens with a clumsy framing device. Mulch Diggums, a scruffy doppelgänger of Rubeus Hagrid, is arrested and shuttled to an MI6 black site. Mulch is played by Disney resident Josh Gad under a false beard and a forced, gruff voice. Though he’s being questioned by an agent behind glass, he treats the interrogation like he’s telling a bedtime story. “Let me tell you the story of Artemis Fowl,” he opens, oddly glib. But from scene to scene, it’s as though credited screenwriters Conor McPherson and Hamish McColl forget about the nature of their own framing device. When he introduces the underground home of the fairies, he announces, “Ladies and gentlemen, welcome to the wondrous, thriving metropolis that is Haven City.” A moment later, when Mulch becomes a character in his own story, he says, “See this—this is my favorite part, mostly because I’m in it.” Sometimes Mulch seems to be addressing the MI6 silhouette observing and asking questions from a security room; sometimes he addresses the viewer of Artemis Fowl. Not even the on-screen storyteller could clarify my confusion.

Newcomer Ferdia Shaw plays Artemis Fowl, whose father, Artemis Fowl Sr. (Colin Farrell), goes missing early in the proceedings. Young Artemis is a genius whose ego matches his book-smarts. He’s a rebel, evidenced by his surfing and skateboarding, and also capable of building futuristic devices. But his understanding of the world comes crashing down when his father’s outlandish stories of fairies and trolls turn out to be true. Shaw isn’t a very appealing screen presence; his performance is wooden and unpolished. Perhaps that’s why Branagh shifts focus to the supporting players. There’s Artemis’ protector Dom (Nonso Anozie), and Dom’s plucky daughter Juliet (Tamara Smart), as members of a Black family that has worked for the Fowl Manor in Ireland for generations (the only people of color in the movie are servants). Elsewhere, members of the fairy police, called LEPrecon, attempt to infiltrate Artemis’ home, led by Commander Julius Root (Judi Dench). The fairies—of the pointy-eared, helium-voiced variety—take up a surprising amount of screen time, especially Holly Short (Lara McDonnell), who proves more central to the story than Artemis.

Branagh is a capable director, so the state of Artemis Fowl is perplexing. It contains scenes of frenzied CGI action, complete with lasers and monsters, and some sloppy storytelling that looks nothing like the clarity and coherence seen in Branagh’s Hamlet (1996) or even Thor (2011). Even his director-for-hire gigs like Jack Ryan: Shadow Recruit (2014) have a certain admirable capableness. Not here. One might shift the blame away from its director to the movie’s time in developmental hell. When various studios, producers, screenwriters, and directors fight for their conflicting visions for two decades, the end result is bound to have some authorial confusion. Worse, Branagh’s usual skill as a craftsman has been sliced and diced by editor Matthew Tucker—and, this reviewer suspects, Disney. Even with its merciful 93-minute runtime, the movie feels punishingly long and disorienting, as though a half-hour of story and character development had been excised. How can a movie spend so little time developing its hero and so much time talking about “time-freezes?” Moments after the credits began to roll, I tried to remember what the Aculos did. I couldn’t recall, though I remembered a character saying, “The Aculos, need I remind you, is the most valuable asset in our world.”

Between Mulch’s puzzling perspective as a narrator and the movie’s overall disinterest in its main character, the viewer remains entirely uninvested in the proceedings. Worth mentioning, too, is the villain, a shadowy figure that readers of the book will no doubt identify. As a viewer, I missed the name if it was mentioned (though I suspect it was not). Had Artemis Fowl been a rousing success, Disney might have explored the villain’s motivations in future sequels, which probably won’t happen. The movie was originally planned for a theatrical release in May 2020, but its debut was moved to the studio’s streaming platform—due to the COVID-19 pandemic, supposedly. Watching the movie, one assumes that Disney realized they had a dud and resolved to avoid any mounting promotional costs and accept the losses on its $125 million (or more) budget. Doubtless, there will never be a sequel. Artemis Fowl will be added to the long list of Hollywood’s failed franchises. I suppose that means I will never learn the villain’s name. But I won’t lose any sleep over it.