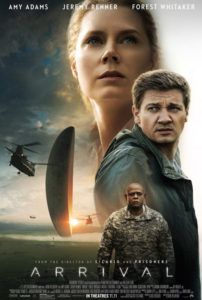 They look like deflated footballs compressed into oblong frisbee shapes. Twelve UFOs hover over nondescript locations around the planet without a proclamation of war or peace, no ultimatums, and no understanding of our language whatsoever. Rather than float over major cities, they linger over locations such as an empty field in Montana, over the Black Sea, or in Siberia. They stand 1,500 feet high on their ends, with one end just a few dozen feet away from the Earth’s surface. Just there, a door opens, where scientists and paranoid military officials enter to make contact. Human representatives around the world preserve their teams’ exchanges with the visitors jealously, although they’re all looking for answers to the same question: “What is your purpose on Earth?” But answers in Arrival do not come without some searching, introspection, abstract thought, and solemn emotion. And that’s one of the best things about it.

Journeyman director Denis Villeneuve brings his expert craftsmanship to author Ted Chiang’s short “Story of Your Life” from 1998. Villeneuve’s films such as Prisoners (2013) and Sicario (2015) find the filmmaker disappearing into the material and, like a chameleon, changing his aesthetic style to serve the story with a meticulous approach. Although the formal qualities of his work have a pristine and precious quality regardless of the material, his measured pacing often keeps the viewer at a distance. However, screenwriter Eric Heisserer’s adaptation bonds us with Arrival’s protagonist, linguistics expert Dr. Louise Banks, from the first scenes. Amy Adams plays Louise with wounded perseverance and deeply affecting humanity, lending several otherwise awe-inspiring sequences from throughout the film an unexpected intimacy.

Indeed, when audiences think of science-fiction or UFOs, or they see the spacecraft in Arrival, they will probably think of Independence Day (1996). And yes, both films feature several similarly-shaped ships docking around the planet. But Arrival isn’t the mindless blockbuster type in which monuments explode and pyrotechnics incite one-liners and popcorn-munching escapism. In fact, for a major studio release, the result is surprisingly introspective and existential for Louise, and thus the audience. Viewers should expect something more akin to Steven Spielberg’s Close Encounters of the Third Kind (1977) or Robert Zemeckis’ Contact(1997), wherein a mysterious voyage of language barriers and psychic influence leads to profound personal revelations. To be sure, the methods and themes of Arrival carry an essential antidote to today’s antagonistic, strife-ridden form of human interaction.

After the visitors establish themselves around the planet, Louise receives a visit from Colonel Weber (Forest Whitaker), an Army Intelligence official who plays her a recording of alien voices. The sounds consist of clicks and tones comparable to whale song, nothing she can translate. She soon finds herself alongside scientist Ian Donnelly (Jeremy Renner), who believes math and science are universal languages, as part of a government operation to open a line of meaningful communication with the aliens in the Montana craft. Entering the monolithic spaceship, dubbed “the Shell”, in bright orange hazmat suits, the team finds their understanding of physics challenged in the ship’s unique gravitational environment, followed by the appearance of the aliens themselves. Named “Heptapods” for their seven legs and cephalopod-esque appearance, the aliens look like upright hands standing on the tips of their fingers, but they remain behind a clear barrier immersed in a cloudy gas.

Louise cannot hope to speak their language and instead communicates through a written form. Even so, their language does not consist of letters or even characters; rather, they deliver inky messages in the form of black, near-circle displays, as though Jackson Pollack painted a coffee ring. Each ring represents a complete, complicated sentence of multiple connotations, whereas most earthly languages rely on a comparatively simple structure of letters, words, sentences, paragraphs, and so on. Although the second act conveniently leaps over how Louise and Ian decipher the aliens’ ink-language, the discoveries provide ample commentary on human beings’ general unwillingness to understand another person, culture, race, or way of thinking different from their own. Humans want things basic, simple, and uncomplicated. And when large human groups have to think, especially in terms they do not understand, they become frustrated, angry, and impatient.

Such a resounding, ambitious subtext could threaten to undermine the human element of the story, but Louise remains the focus throughout Arrival. Adams delivers a performance of thoughtful humanity, her presence calibrated to match Villeneuve’s concentration on inward stillness and contemplation (both of Self and the greater situation). Regardless of how incongruous such a notion would seem for a sci-fi picture, it works, and Louise’s personal pain and openness to nonlinear thinking—largely in flashes to images in her mind—provide a crucial perspective to solve the film’s puzzle. The turns throughout the story prove deceptively linear and focused; viewers may even want to return to the film to look for clues after they realize how the puzzle works. Fortunately, Arrival connects the puzzle to its narrative and protagonist in affecting, unexpected ways that build everything onscreen and avoid reducing the story structure to a gotcha.

Curious but effective tonal modulations and booming sounds from composer Jóhann Jóhannsson make up the score, lending an unearthly sound to the music and atmosphere to the picture. But if there are any major faults in Arrival, they reside in a couple of distracting visual choices. First, Louise enters the alien craft inside their specific atmosphere at one point and the CGI-created weightlessness leaves Adams’ hair looking like cartoon dancing worms (the FX in this sequence may be the sole moment I was removed from the story). Second, cinematographer Bradford Young shoots in a distracting amount of close-ups, aside from some occasional sweeping shots of the Shell. Undoubtedly, this choice was to enhance the film’s more intimate story elements in juxtaposition with the international scale, but the viewer cannot help but wonder if Villeneuve has catered his visual style to meet the needs of contemporary viewers accustomed to watching TV or movies on their smartphones.

Nevertheless, Arrival remains an unlikely sort of sci-fi drama less about aliens and spaceships than the experiential and intangible qualities of life, emotion, and memory. How strange that a $50 million genre production featuring major stars and a wide theatrical release would contain themes about clear communication that resonate in such personal ways. Moreover, this is a quiet film devoid of shouting or a barrage of explosions—the type of film where the audience remains silently absorbed throughout. Its general decibel level hums along softly, requiring viewers to focus and become captivated. At the center of that captivation is Adams’ incredible performance and Villeneuve’s careful, detailed approach. Both cerebral and achingly emotional, Arrival sustains a message about hope and understanding for a better humanity that audiences may need right now.