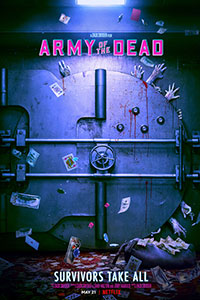 Army of the Dead, Zack Snyder’s return to the zombie genre after his 2004 remake of George A. Romero’s Dawn of the Dead, has a little bit of everything. The plot is concocted from a familiar set of ingredients in a different, but not mind-blowingly so, arrangement—like slapping peanut butter or a fried egg atop a greasy hamburger. It features a former wrestler, gun battles, quippy roughnecks, a getting-the-team-together montage, an undead tiger, an exploding gas tank, an elaborate vault robbery, parkour zombies, sleeping zombies, a zombie baby, robo-zombies (maybe?), a zombie horse, problem-solving zombies, double-crosses, last-minute rescues, and a nuclear blast. At 148 minutes, it’s a guns-blazing, fast-moving actioner with a hefty price tag of $90 million and plenty of expensive-looking special FX. While offering a few twists on conventional zombie tropes, it’s also filled with the director’s signature nihilism and showmanship, and thus, it feels uncharacteristically personal at times. Or at least, as personal as Snyder allows in his grandiose visualizations, macho posturing, and cynical worldview to get.

Earning a limited theatrical release before arriving on Netflix, Army of the Dead has the quality of big-budget direct-to-streaming fare in that it feels Frankensteined together from other, better movies. It’s best watched at home, where the small screen will soften its tendency to reference better movies. To be sure, Army of the Dead is defiantly referential, as though Snyder wanted to pay homage to his own cinematic favorites in a go-for-broke, head-exploding, R-rated extravaganza. There’s a meat-and-potatoes quality to everything onscreen, suggesting Snyder had become so exhausted with the last decade of Warner Bros. and dour PG-13 superheroes—culminating in the “Snyder Cut” of Justice League, which hit HBOMax earlier this year—that he needed a back-to-basics project to clear his head. The opening sequence alone signals his intent: On a desert highway, a new bride fellates her husband in a car racing toward a government convoy carrying a well-guarded payload. The two collide, unleashing an alpha zombie who makes quick work of the soldiers before setting his sights on Las Vegas.

Some months later, Vegas is a walled city overrun by smart zombies and scheduled for demolition by a nuclear blast. That’s when the resident hero, Scott (Dave Bautista), a decorated soldier now serving as a fry cook, receives a visit from a businessman named Tanaka (Hiroyuki Sanada). Tanaka offers Scott a massive payday to break into his Vegas casino and steal $200 million in cash, for which his insurance company has already reimbursed him. Once a selfless warrior who fought to contain the zombie threat, Scott now reasons, “What if, just once, we did something for us?” So, in a sequence that feels reminiscent of Michael Bay’s Armageddon (1998), he enlists a diverse crew to carry out the impossible mission: a philosophizer with a rotary rescue saw (Omari Hardwick), a German safe-cracker (Matthias Schweighöfer), an experienced soldier and love interest (Ana de la Reguera), a wise-cracking helicopter pilot (Tig Notaro), and two well-armed social media stars (Raúl Castillo, Samantha Win). For good measure, he adds his estranged daughter (Ella Purnell) and a guide (Nora Arnezeder) who knows how to sneak inside the quarantined city. Tanaka’s shifty head of security, Martin (Garret Dillahunt), joins them too. 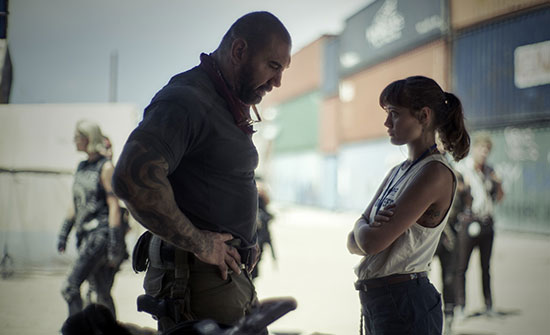 If the opening feels reminiscent of Armageddon, then the second half smacks of James Cameron’s Aliens (1985). Consider the similarities: they both feature a smart-alecky militarized posse heading into a once-thriving city whose population has been overrun by, and transformed into, monsters. But those monsters aren’t the mindless creatures our heroes assume them to be. Rather, they have a precise hierarchy dependent on capturing and turning people into one of them, overseen by a smarter-than-average leader with a thick head plate. While the monsters ambush our heroes, the resident company man arranges to sneak out a live sample to engineer bio-weapons—and eventually, when he tries to sneak away, he gets it real bad. Meanwhile, the primary hero feels parental responsibility for a daughter who ends up in the monster-leader’s lair. But once the hero makes a solo rescue with only minutes to spare before a massive explosion, the parent-child duo rushes to the roof where the airborne transport is supposed to be waiting but isn’t. All seems lost until, of course, the pilot returns and flies them to safety—except for the monster-leader who jumped aboard for a one-on-one battle with our hero.

The screenplay by Snyder, Shay Hatten, and Joby Harold, based on Snyder’s story, follows the “meets” brand of most modern genre filmmaking. It’s Armageddon meets Aliens. Or maybe it’s John Carpenter’s Ghosts of Mars in its use of sentient zombies in a veritable ghost town (not to mention stunt performer Richard Cetrone playing the zombie leader in both movies), meets Steven Soderbergh’s underground vault robbery in Ocean’s Eleven, to reference two 2001 titles. There’s also a touch of Super 8 (2011) when the government transport crashes and exposes the local population to a dangerous threat. Stylistically, Snyder alludes to his own work. The slow-motion title sequence like the one in Watchmen (2009) unfolds to an ironically smarmy cover of “Viva Las Vegas,” performed in part by Richard Cheese, who also sang “Down with the Sickness” for Snyder’s Dawn of the Dead remake. The fast-paced zombies, too, recall the director’s debut feature, which remains his best work to date.

Once you get over Army of the Dead’s blatant allusionism, you can focus on Snyder’s blunt force trauma style of filmmaking. Although his treatment does a disservice to iconic superhero characters like Superman or Lois Lane, who demand a more dexterous and playful touch, Snyder’s aesthetic is perfectly attuned to a massive, brash, and cynical zombie actioner. But occasionally, his penchant for hammering a point to a pulp becomes exhausting. When the characters learn they have a narrow window of only 90 minutes before a nuclear arsenal blows them to smithereens, it’s surprising how often they stop to declare love for one another in cliché-ridden dialogue. And Snyder shows his music video roots with an unsubtle soundtrack featuring somber covers of “Bad Moon Rising” and “The End.” However, his most blatant choice must be The Cranberries’ “Zombie”—a selection so on-the-nose it causes unintentional laughter. 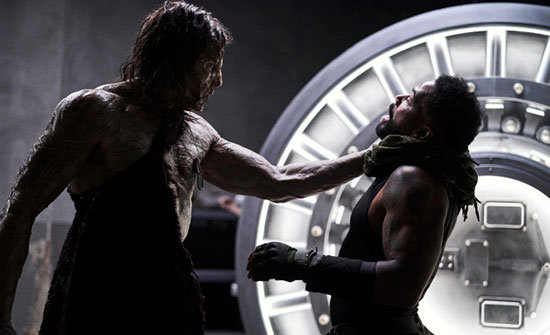 Although most of Army of the Dead seems like standard Snyder fare, some peculiarities emerge that make it seem less straightforward than it appears. For example, Hardwick’s character waxes about time loops and temporal distortions in a sequence that has led to much speculation online. The nature of the zombies, too, leaves room for exploration. Snyder’s Dawn of the Dead helped popularize fast-moving zombies after 28 Days Later (2002) performed the initial groundbreaking. Similarly, Army of the Dead picks up where George A. Romero left off with his exploration of intelligent zombies in Day of the Dead (1985) and Land of the Dead (2005), albeit with some underdeveloped flourishes from hibernating zombies to a hint of some blink-and-you’ll-miss-it cybernetic influence beneath the rotting surface. Unfortunately, the movie never adequately explains what’s happening here. Doubtless, answers will emerge with Snyder and Netflix’s plans to create a cinematic universe of prequels, sequels, and animated spin-offs based on the material.

As for the basics, Snyder knows how to stage exciting action sequences, and those watching for cheap thrills will enjoy the ride. Army of the Dead is mercifully light on Snyder’s usual film speed manipulation until the climactic scenes, which is a relief after the oppressive amount of slow-motion in Justice League. Snyder and editor Dody Dorn also play funny games with time when, after announcing the characters have just 20 minutes before the nuclear blast, it takes about double that before the bomb drops. Serving as cinematographer, Snyder captures the action with clarity; though, his use of shallow focus attempts to inject somber, visual seriousness into dramatic scenes that fall flat. But you get the sense that Snyder, after recent events in his life, might be working things out onscreen with his treatment of fathers—both Scott and the zombie leader grapple with the idea, or reality, of losing a child. However, neither Bautista nor Cetrone’s performances prove all that affecting, and the self-serious moments with their characters feel overly weighty in this context.

The best zombie movies have something to say about our culture, and Army of the Dead contains a few lines that hint at a larger meaning, but they hardly form into a perspective. A more focused and less meandering screenplay might have made better use of Snyder’s jabs at America today. Remarks about immigration, border walls, predatory police, empathetic Others, and a president who thinks a nuclear explosion will look “cool” feel like throwaway asides that a filmmaker like Romero would have formed into a cohesive commentary. Instead, Snyder’s point of view is generally pessimistic, culminating when Scott’s idealistic volunteer daughter realizes the world is even worse than she imagined. Sure, sometimes the world feels overrun by awful people and monsters, but Snyder doesn’t offer any further insight. Even so, Army of the Dead manages to provide ample escapism for a two-and-a-half-hour zombie movie, which both Snyder and Netflix have confirmed is the Snyder Cut. For all its flaws, it’s the best thing Snyder has done since Dawn of the Dead.