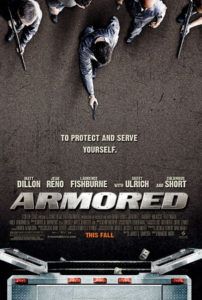 B-grade though it may be, Armored fulfills all the basic needs of your average thriller, doing so with a predictable setup and by relying on the bare essentials. The strange thing is, though the movie goes everywhere it’s expected to, twists and turns in ways you see coming, and resolves its conflict with a big red bow, it still manages some genuinely gripping moments, largely because the characters are so well developed. But despite having a spot in the sphere of standard heist-gone-wrong movies, it’s entertaining thanks to the familiar faces of the cast and the functional direction from Vacancy helmer Nimród Antal.

Being about the robbery of armored security trucks by their scheming drivers, here’s a rare heist movie imbued with a morality vital to its success. The robbers aren’t cold-blooded professional crooks, but rather blue-collar working men needy for a buck. Take Iraq War veteran Ty (Columbus Short); the bank is knocking on his door about impending foreclosure and social services is threatening to take away his teenage brother in lieu of their parents’ deaths. Ty’s godfather, Mike (Matt Dillon), secured him a position at Eagle Security driving armored trucks, but that isn’t enough to pay the bills. One day after work, Mike proposes that their chummy group of drivers steal the millions in the next day’s bank run, making it look like they were robbed. At first, Ty refuses, but then he realizes that these desperate measures are the only way out of his financial bind. He agrees to Mike’s plan, on the condition that no one gets hurt.

Of course, someone gets hurt—a hobo-witness living in the abandoned steel mill where the drivers hide their loot—and so Ty has to stand up to his increasingly crooked coworkers. He locks himself in the impenetrable truck with half the booty, but the industrial surroundings prevent him from radioing out for help. Then a curious cop (Milo Ventimiglia) hears some suspicious sounds and starts poking around. Adding to the tension, the villains are on a short timeline to get Ty out, get their cash, and spin a story to their boss (Fred Ward) about how they were robbed by nonexistent masked assailants. Ultimately, the result is something like Panic Room on wheels: There’s a whole bunch of money in the big metal box. The bad guys can’t get in, despite using every tool at their disposal, and the good guys can’t get out. So the bad guys have to draw the good guys out by other means.

The thieves all have thinly described personalities, but the actors give them character. The effective Dillon is joined by Jean Reno, Laurence Fishburne, Skeet Ulrich, and Amaury Nolasco. Each grows more desperate, some in their hunger for death and money (Fishburne), and some in a desire to escape their plan which has gone out of control (Ulrich). The bulk of the movie belongs to Short, however, who plays the only three-dimensional character in the group. And he’s so well defined by James V. Simpson’s script that we’re less concerned about the overly simple robbery and more involved in Ty surviving to pay his delinquent bills.

Antal’s unpretentious direction serves Armored well, keeping the ensemble evenly framed, the action completely intelligible, and his protagonist the heart of the movie. It would have been easy for this low-budget heist flick to become gratuitously violent and pointlessly explicit, but this is a story of actions tightly bound to motivations and resolutions that have a sense of moral justice. (How rare that the hero of a heist movie isn’t one of the thieves, but rather someone who resolves not to pinch the goods. Hollywood’s heist movies today love to provide catharsis in the form of thieves getting away with one big score. Not so here.) Simplistic as the material may be, it’s watchable because of the way it’s presented, which at times is obvious, but it’s also satisfying and palpable in a straightforward approach.