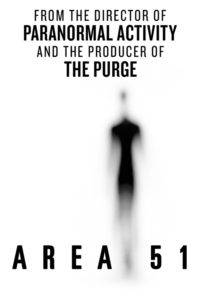 After Oren Peli launched the Paranormal Activity franchise in 2007, the writer-director made a career on found-footage material. First came Paranormal Activity 2 in 2010, which he produced along with parts three through five, and an upcoming sixth entry due later in 2015. Peli also produced and wrote a short-lived found-footage TV series called The River, and then produced other found-footage movies called Chernobyl Diaries and The Bay, all in 2012. But back in 2009, Peli announced a new project called Area 51 that never seemed to materialize. Over the years since the announcement, he shot footage and conducted reshoots, but no finished product materialized, until now.

Distributed on VOD and in very limited release in Alamo Drafthouse theaters only, Area 51 wasn’t worth the wait. Not at all. Peli’s second directorial effort arrives with a whimper, resembling a dozen or more found-footage movies released since the first Paranormal Activity. Indeed, it’s all very familiar. You know the drill: A bunch of dudes, determined to go somewhere they shouldn’t, decide to record their experience and things go bad. Very bad. Of course, they’re incapable of holding the camera still, giving us an overdose of shaky-cam and a mild headache for the duration.

The story involves a trio of bromantic buds—Reid (Reid Warner), Ben (Ben Rovner), and Darrin (Darrin Bragg)—who resolve to break into the titular top-secret government base to gather proof of aliens. It all starts when, one night during a kegger, Reid disappears, presumably abducted by aliens. When he shows up later on the road, he isn’t the same. For the next three months, he spends a lot of time researching UFOs, reading conspiracy theory books, and watching alien autopsy videos. He convinces Ben and Darrin to drive out to Nevada and infiltrate the base in search for answers, but not before breaking into an Area 51 employee’s house to steal his security card and fingerprints, and meet with a woman (Jelena Nik) with maps of the installation’s interior. However, their first stop involves a test of their night vision cameras at a Las Vegas strip club. Classy.

About an hour into this 90-minute flyby, the brahs finally arrive on the base’s outskirts. By this time, they’ve been told tall tales by fanatic locals about aliens who shed their skin, have mind-control powers, and use mysterious white lights—all of which end up being inexplicably accurate. (How do the local crackpots have so many precise details?) Reid, too, has suspicious knowledge of the base’s security measures, reassuring his mates that “This is normal” and “We should be fine”. After strange unearthly noises and security alarms signal their presence within the complex, Reid continues to insist, “Let’s keep moving”, when anyone else would have turned around and ran by now. Of course, they finally see a neat UFO and some average, grayscale aliens, but they’re not all that interesting to behold. As you might expect with such fare, the movie ends when things go bad and the cameras switch off abruptly.

Slow-burning with little payoff, there’s no reason Area 51 should have taken six years to produce. It’s far too standard to take so long to make. The movie is hardly a masterpiece, nor even a serviceable distraction, and it wouldn’t have been any better a few years ago, before the found-footage subgenre had run its course (and then some). Whereas found-footage movies like Chronicle have since given us three-dimensional characters and the V/H/S series has experimented with the medium in inventive ways, Peli’s treatment offers nothing but one-dimensional characters, a standard formal presentation, and an uninvolving story. Moreover, it’s undeniable proof of Peli’s initial overestimated talent.