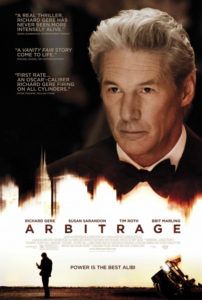 What’s clear in watching Nicholas Jarecki’s Arbitrage is that the director admires Oliver Stone’s Wall Street. That film has no end of thematic influence on this first-time helmer, who uses customary elements of financial dramas and thrillers in his script; but his elegant treatment keeps them from souring. In place of Stone’s optimism, which suggests crooks like Gordon Gekko will eventually get caught and go to jail, Jarecki explores how the top 1% benefit from all that money. One of money’s great comforts is that it often prevents those who have great sums of it from having to answer for their crimes. And like Stone’s 1987 classic, Jarecki knowingly cast a charismatic actor to play his charming yet criminal protagonist. Because, after all, wheeler-dealers who lie, cheat, and steal for a living justify their moral transgressions through their special way of eliciting trust and closing deals. If they weren’t so interesting and thus effective, their scams wouldn’t work.

Indeed, without Richard Gere at the center, Jarecki’s film wouldn’t work so well either. Gere plays Robert Miller, a Wall Street investment executive who, as the title suggests, simultaneously buys and sells financial institutions and people’s trust for his own profit. At the outset, Miller endeavors to close a deal that will ensure the healthy sale of his company, except the sale cannot proceed until his company passes an audit. Trouble is, his company is broke, and he has fraudulently cooked his books to pass the audit and complete the sale. But this isn’t the only stress for Miller, who has just turned 60 and wants to retire. His cocaine-fuelled artist mistress demands a commitment. On a late-night drive with her, he falls asleep at the wheel, and they crash. He escapes the wreck alive, and she does not. The car goes up in flames. A scandal like this could ruin his impending deal. And so he calls the reluctant Jimmy (Nate Parker), a young black Harlemite whose father used to drive for Miller, and who wouldn’t traditionally be found in Miller’s circle of friends, to pick him up and keep his secret.

Inevitably, there’s an investigation headed by smug Detective Bryer (Tim Roth), who bullies Jimmy only because he knows he can’t touch someone of Miller’s status. But the dilemmas multiply as Miller coordinates a series of lies to the police, his family and business associates, all in an effort to close the imminent deal. Meanwhile, his daughter and the company’s CFO, Brooke (Brit Marling), has discovered the company’s falsified records, and Miller’s wife (Susan Sarandon) might be talking to a divorce attorney. Then there’s Bryer, who just won’t let up. And through it all, Gere slithers through high-tension moments and, his good looks and magnetism intact, somehow brings sympathy to a man from the otherwise unsympathetic upper echelon whose illegal and immoral practices have driven capitalism to the staggering lows that caused the current recession.

The film’s moralist stance isn’t barefaced or preachy, however; it resides under the surface of a solid thriller, and it slowly grows upon reflection. In a way, the film resembles a Hitchcockian wrong-man scenario, except here, the situation is turned upside-down by following an accused criminal we know is accountable. By our nature as moviegoers, we cannot help but identify with Miller. And when the final moment comes, and the credits suddenly roll, we realize who we’ve been rooting for all along. He is the tarnished soul of today’s America—a man who places more value on himself and the size of his bank account than the stability of his family. Financial executives like this do get away with veritable murder. Look at the 2008 crash. Was anyone convicted for committing those crimes? Alas, no. Only in our present-day state of tied hands and turned cheeks could a film like Arbitrage be made. Imagine the outrage if Gordon Gekko got away with it!

But today, every Gordon Gekko gets away scot-free. Jarecki’s outrage over this trend has manifested itself in a capable potboiler whose relevant themes are never intrusive, so much so that one might consider the film’s morals questionable. Certainly, the Gekkos and Madoffs of the world could sit down with Arbitrage and root for their kind to escape the nosy detective’s posturing and secure the company’s sale, making Miller a heroic figure. But then they’d only be watching the surface layer of Jarecki’s slick plotting and tense dialogue, which manifest themselves in a way that breathes exciting life into a scenario more accessible than last year’s Margin Call, but nowhere near as sentimental as The Company Men. All three films have similar messages. Above all, the director’s greatest assets are Gere, Sarandon, and Roth, whose performances make this potentially dull and sometimes overly familiar material compelling. For the first film of a novice, Arbitrage is made with confidence, both technically and in its topic’s environment, and so it’s very watchable, even shyly important for contemporary viewers.