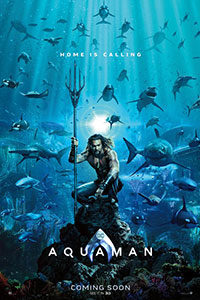 After Aquaman, I was looking through the notes I scribbled onto small pieces of paper and noticed that I had twice written, “What the fuck am I watching?” Although that’s hardly an incisive critical objection, when I began to sit down and write this review I realized it was more than just a simplistic gut reaction. The latest debacle in the DC Extended Universe, the series of superhero movies from Warner Bros. that, aside from Wonder Woman (2017), have done little else than disappoint, Aquaman is somehow the most ambitious and most awful of the bunch. It’s a varied hodgepodge of ideas and styles thrown together into an unpleasant, confusing whole. Oddly, it reminded me of the House on the Rock, the bizarre funhouse collection of trinkets gathered in Wisconsin by crazed architect Alex Jordan Jr., much to the chagrin of his neighbor, Frank Lloyd Wright. Each boasts a weird assemblage of sights, sounds, and genres to behold, influenced by countless sources throughout history. Each plays like an ironic experience into which one never fully settles. And oddly enough, each features an instrument-playing octopus—at the House on the Rock, it’s an animatronic display set to The Beatles’ “Octopus’s Garden,” whereas in Aquaman it’s a CGI cephalopod who plays the drums during an underwater gladiatorial bout.

It’s rather difficult to describe what director James Wan and his screenwriters, David Leslie Johnson-McGoldrick (Orphan) and Will Beall (The Gangster Squad), have done here. Their story of the half-Atlantian, half-landlubber hero follows Arthur (Jason Momoa), widely known as Aquaman, who must return to the undersea kingdom and fight his evil brother, Orm (Patrick Wilson), to claim his rightful spot on the throne, while also stopping Orm’s hopes for war between the surface world and the seven kingdoms beneath the surface. Though it’s based on a comic book character, the material draws heavily from science-fiction aesthetics in a blend of neon and bioluminescence, high-tech super suits, and metropolises at the bottom of the ocean. Yet, it treats the royal scandals with all the weight of Shakespeare. The two-and-a-half-hour adventure looks and feels like the spawn of Flash Gordon (1980) and TRON: Legacy (2010). There’s even a land-faring interlude that plays like a cheap knock-off of an Indiana Jones or Lara Croft yarn. To be sure, this is a movie chock full of sometimes incongruous elements, much to the viewer’s exasperation.

Momoa, who played the role in Justice League (2017), approaches Aquaman with unchecked swagger. His performance consists of dramatic looks back over his shoulder, his lengthy mane flowing in the wind or wrapped in a hip man-bun. With his dialogue limited to surfer dude-level exclamations (“Hell yeah!”), he plays a character who happens to be the least interesting component in the movie’s copious story. Once his phallic scepter is broken by his brother, Aquaman searches alongside his love interest Mera (Amber Heard)—who looks like a plastic doll of Disney’s Ariel—for a mythical trident that will earn him the coveted, laugh-inducing title “Ocean Master.” But in order to retrieve said MacGuffin, he must locate a lost sea, the location of which is hidden in a desertous underground city, which can only be found using an ancient doohickey uncovered by Atlantian scholars. All of this requires globe-trotting and sundry CGI battles with various bad guys: Black Manta (Yahya Abdul-Mateen II), a futuristic pirate bent on avenging the death of his father; freaky-looking trench monsters; Atlantis’ super-suited stormtroopers; an army of crab people; and a sea monster that makes the Kraken seem dwarfish. 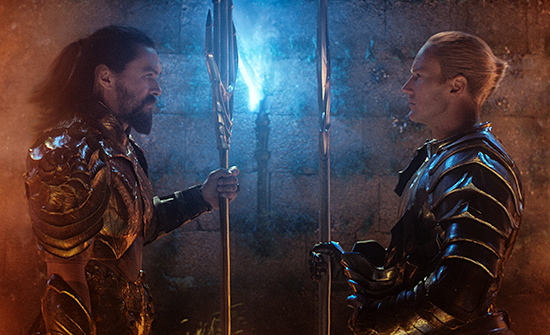 By the time Aquaman faces Orm in an undersea war, everything depends on our hero’s ability to perform the signature move of the Ocean Master—a twirly baton trick that creates an impenetrable water shield. If the various levels and goal completions littered throughout the plot didn’t already establish Aquaman’s dependence on a video game structure, this detail seals the association. Elsewhere, the score by Rupert Gregson-Williams has more personalities than James McAvoy’s character in Split (2016). The music, much like the movie as a whole, maintains an oddball blend of genres. During the camera’s tour of Atlantis—resembling the flying car journies in Blade Runner 2049 (2017) if Los Angeles was Pandora from Avatar (2009)—the electronic sounds of ‘80s synthesizers blare. In the more regal scenes that involve Aquaman’s royal mother Atlanna (Nicole Kidman) or discussions of Atlantis royalty, the score uses rousing blockbuster whooshes comparable to Thor (2011). Indeed, here’s a movie that seems to have an identity crisis before our very eyes.

Most obviously, a lot about Aquaman borrows from the narrative trajectory of Marvel’s Thor, as both follow a hero not-yet-ready for the throne promised him. Both characters must leave their native land in a fish-out-of-water scenario, as both also have some growing up to do, mythical villains to defeat, and a treacherous brother to thwart before transforming into the hero everyone knows and loves. Not that the obviousness of the material troubled the writers, who didn’t appear to be concerned with writing good dialogue or employing a novel story structure either. Amid the many pop-culture references throughout, Pinocchio is among the most apparent; there are also banal winks to seafaring cinema like Jaws when Black Manta proclaims, “Gonna need a bigger helmet.” Or consider the written-for-the-trailer exchanges, such as when one pirate asks, “Did we hit something?” Another replies, “No, something hit us.” The same sort of back-and-forth occurs later when King Nereus (Dolph Lundgren) says, “I’m not trying to start a war.” Then Orm replies, “The war has already begun.” These patterns of dialogue are mirrored by the frequency of abrupt plot transitions. No less than three times in the movie is a calm moment interrupted with a sudden, unexpected explosion that jolts the characters into the next action sequence.

Wan cut his teeth on horror, from Saw (2004) to The Conjuring (2013), and he only recently began branching out into blockbuster fare with Furious 7 (2015). He’s a talented visualist but rarely works from exceptional scripts, and he brings an undeniable visual appeal to Aquaman. It might all be more impressive if the CGI hadn’t reached cartoonish lows. Given the nature of the hero, Wan relies on computer technology to achieve the deep sea action. Underwater scenes have a constant waviness to them, the characters’ faces undulating ever-so-slightly, while their subaquatic voices have a distracting tinny echo, making them difficult to follow at times—especially Momoa, who doesn’t always annunciate. One or two memorable images stand out, such as Aquaman and Mera descending into a black pit at the bottom of the sea, surrounded by thousands of creepy baddies and guided only by the pink light of a flare. But somewhere between the artificial sunsets, bubble-accentuated action, and the weird way everyone seems to just float onscreen without treading water, the visual presentation proves very silly, very early into the proceedings.

Aquaman begins promisingly enough with a scene in which the banished Atlanna meets her human lover (Temuera Morrison). They share an affecting romance, produce a child, and then Atlanna becomes a target of her kingdom. A nifty, intense fight sequence ensues, and it’s winkingly shot through a fisheye lens (you know, because of fish, the sea, Aquaman, etc.). Throughout, moments like this adopt a kitschy sense of humor, but the movie isn’t self-aware enough to realize just how ridiculous, over-the-top, and absurd every scene manages to be. There wasn’t a single moment where some part of me wasn’t asking “What the fuck am I watching?” In a way, perhaps due to Lundgren’s presence, the production reminded me of another comparison to Aquaman: the beleaguered Masters of the Universe from 1987. Both plunge forward in a heaping mish-mash of genres, references, and tones, and watching it is like seeing an expensive accident unfold. It’s a disastrous blockbuster and at times an embarrassing movie that’s trying everything, but almost nothing it tries works. And yet, I couldn’t hold it against someone if they found this quality about Aquaman to be fun.