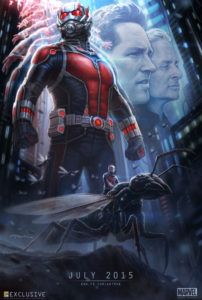 First appearing in Marvel Comics’ Tales to Astonish in 1962, Ant-Man comes from the Atomic Age, when nuclear explosions shrunk men or made insects into towering behemoths in films like The Incredible Shrinking Man (1957) and Them! (1954). There’s something very pure about this era of heroes and their rather simple powers, and how those powers were explored and ignited the imagination. Stan Lee and Jack Kirby created the character, a scientist named Dr. Hank Pym, who decreases his size thanks to a special suit. Ant-Man was also one of the founding members of the Avengers (alongside Iron Man, Thor, Captain America, and Wasp). Over the years, the character’s popularity, or lack thereof, resulted in the other Avengers becoming household names and Ant-Man drifting into relative obscurity. And until Marvel dusted off the character for their latest feature film, he may have remained that way. But after the entertaining and often hilarious Ant-Man, the character will likely become as adored as other lesser-known-characters-turned-popular, like the Guardians of the Galaxy.

Originally developed for Marvel by director Edgar Wright (Hot Fuzz), Ant-Man began as a passion project in which Wright created a short test reel that impressed Marvel execs. Over the course of eight years, Wright slowly convinced Marvel to produce his screenplay, co-written by Joe Cornish (Attack the Block). Pre-production began early in 2014, until Wright suddenly announced he was leaving the project, citing the ubiquitous “creative differences” explanation. In a way, it came as little surprise. More and more, directors (such as Alan Taylor and Joss Whedon) have remarked that Marvel Studios head Kevin Fiege and his team exacts their ideas on filmmakers, sometimes to a stifling degree—especially filmmakers accustomed to realizing their precise vision, such as Wright. As a result, Marvel has sought out less visionary, more controllable directors to helm their projects. (For example, You, Me and Dupree directors Anthony and Joe Russo made the excellent Captain America: The Winter Soldier.)

To replace Wright, Marvel hired Peyton Reed, director of Bring it On (2000) and Yes Man (2008)—he hardly has an impressive résumé, but Marvel seems to have mastered their management of lesser talent. Wright had already begun to cast his film, hiring Paul Rudd as the titular hero, along with Evangeline Lilly and Michael Douglas in the supporting cast. To further fit their own vision for Ant-Man, Marvel hired Rudd and Will Ferrell’s long-time comic collaborator Adam McKay to rewrite the script, injecting more humor and tie-ins to other Marvel material. The resulting screenplay shares its structure with the original Iron Man (2008), in that both films involve a futuristic tech company headed in the wrong direction, a hero who uses the company’s technology (in the form of a futuristic suit) for the betterment of humankind, and a power-mad corporate villain who dons an analogous suit but uses it for evil. Despite the similarities, Ant-Man proves to be incredibly funny and lighthearted, playing much with witty, shrink-based humor and utilizing Rudd’s easygoing presence. 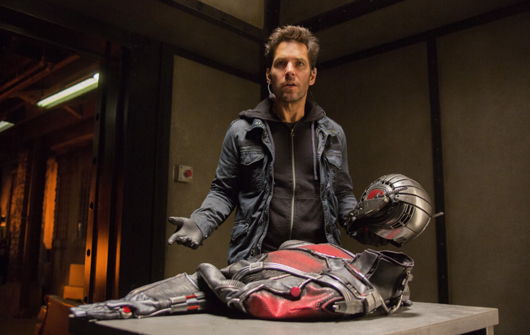 The film opens with a scene set in 1989, where Hank Pym (Douglas) defends his shrinking “Pym formula” from Martin Donovan’s shady S.H.I.E.L.D. intentions, hoping to keep his Ant-Man suit from being used for the wrong reasons. (NOTE: The scene almost proves distracting, because the CGI used to make Douglas appear twenty-plus years younger is flawless, returning him to the look of Gordon Gekko in Wall Street.) Hank resolves to resign from S.H.I.E.L.D. and start his own tech company, which, once we leap to today, is run by Darren Cross (Corey Stall). Darren has long sought to replicate the “Pym formula” but can only shrink inorganic material—animal and human subjects transform into little splats of goo. But because Darren is getting too close to discovering his secrets, Hank teams up with his estranged daughter Hope (Lilly), Darren Cross’ right-hand, to stop him. The plan begins with finding a new Ant-Man. Enter Scott Lang (Rudd), a nonviolent burglar and whistleblower who, after being released from three years in prison, wants only to reestablish ties with his young daughter, with no help from his ex-wife (Judy Greer) and her new detective boyfriend (Bobby Cannavale).

With not one, but two rocky father-daughter relationships established in the measured first half, the exciting second half picks things up as Scott, reluctantly joining Hank and Hope, dons the Ant-Man suit. Much like Iron Man, the most interesting scenes involve Scott’s training and the discovery of Ant-Man’s powers (such as jumping through a keyhole), and how he’s stronger when he’s smaller. There’s also an effective romance established between Scott and Hope during these scenes; however, Hope believes she should be wearing the Ant-Man costume (hints suggest we’ll see Lilly as Wasp in future Avengers titles). We also learn how Scott can communicate with various species of ants, using them as vehicles or helpers in his shrunken state. One particular bug, named “Antony,” becomes the Silver to Ant-Man’s Lone Ranger. All of his shrinking powers and ant friends come in handy when Darren Cross puts on his laser-armed “Yellowjacket” suit, which he hopes to replicate into a super-soldier assassin getup, and wages a miniature war on Ant-Man. Some of the best moments in Ant-Man involve the two tiny characters engaging on an amusingly small battlefield, such as a little girl’s bedroom.

Just as previous Marvel fare has applied superheroes to an established genre (Thor was partly a Shakespearian drama, Captain America: The First Avenger was a WWII adventure, and Captain America: The Winter Soldier was a spy thriller), Ant-Man is a heist film. Typical scenes for the genre accompany the material, including an involved planning sequence and a mission to steal the Yellowjacket costume that, of course, doesn’t go as planned. Michael Peña, David Dastmalchian, and rapper Tip ‘T.I.’ Harris play Scott’s ex-con buddies, and they assist with the heist, but each seems out of place among the superhero goings-on in the funniest way possible. Peña, in particular, steals several moments late in the film. Throughout, the energetic pace and mood remain fast and light, and Reed capably handles action scenes and humor, leaving the minuscule landscapes (or perhaps they should be called gigantic landscapes, from an ant’s-eye-view) to the CGI wizards behind most Marvel productions. Perhaps the most inspired sequence involves an iPhone, The Cure’s “Disintegration”, and a near-zero gravity fight in slow-motion.

Although there’s not much to Rudd’s character, the audience cannot help but endear themselves to the actor’s affable nature; he’s instantly likable and, in the costume, filled with quips and wily moves. His chemistry with the intense yet charming Lilly is instant, leaving us excited for future adventures of Ant-Man and the Wasp. Overall, the film makes excellent use of Ant-Man as both a comic and action device. The shrink-enlarge-shrink fight sequences prove thrilling, while the most memorable moments of Ant-Man revolve around the irony of the hero’s size in relation to his large environment. Still, audiences who waited for years to see Wright’s version are left with lingering curiosity about how much more technically brilliant his version would have undoubtedly been. But sequences where Peña’s character recounts impossibly long he-said-she-said stories rely on a brand of fast-paced editing that evokes Wright’s influence. Though Ant-Man doesn’t feel unique within the Marvel Cinematic Universe, it’s a wonderfully entertaining entry in their ongoing expansion, creating a character that fans will look forward to seeing in future films. Much like Marvel Studios itself, Ant-Man is limited in what it does, but the film does it exceptionally well.