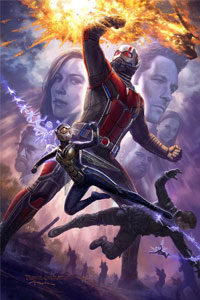 Watching Ant-Man and the Wasp, it becomes evident that director Peyton Reed and his team of five credited screenwriters have once again extended the limits of what it means to be a film in the Marvel Cinematic Universe. As played by Paul Rudd, the hero Scott Lang, aka Ant-Man, seems less from a realm of supers, gods, and mad titans, and more from the realm of hipster humor and buddy comedies. He’s ever aware that everything fantastical going on around him remains impossible, absurd even, and the character’s willingness to comment on such comic book outlandishness makes him an outlier. “Do you guys just put ‘quantum’ in front of everything?” he asks at one point, fully aware that the scientists Hank Pym (Michael Douglas) and Hope Van Dyne (Evangeline Lilly, without her Louise Brooks haircut this time) speak almost exclusively in science-fiction technobabble. His presence, and indeed much of Ant-Man and the Wasp, concerns itself with comedy and fast-paced heist action, in that order. While titles from Guardians of the Galaxy to Thor: Ragnarok have embraced humor in major ways, no MCU title has been more concerned with laughs than this.

Rudd’s character feels different because the main conflict in his two MCU features thus far, Captain America: Civil War notwithstanding, involve the ex-con trying to reform and be a good father to his young daughter, Cassie (Abby Ryder Fortson). After helping Captain America fight off the bureaucratic government stoogery of Iron Man and company, Lang finds himself on house arrest in San Francisco, tagged with an electronic anklet. With just a few days left of his two-year sentence, he’s been working alongside his friends Luis (Michael Peña), Dave (Tip ‘T.I.’ Harris), and Kurt (David Dastmalchian) to start his own private security company. But Hank and Hope enlist Scott to help them recover their respective wife and mother, Janet Van Dyne (Michelle Pfeiffer), who has been trapped in the quantum realm for 30 years—ever since “going sub-atomic” to stop a bomb in the heyday of Cold War espionage, when she and Hank worked for S.H.I.E.L.D., and Hank’s future promised several betrayals and his lasting disillusionment with officialdom. Joining Scott in his malfunctioning Ant-Man costume, which keeps shifting his size from big to small, quite uncontrollably, is Hope in her winged Wasp costume. She’s the real hero of the story, whereas Scott seems almost peripheral to the task at hand. 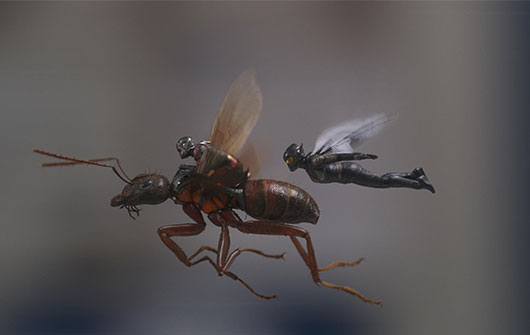 It’s arguable whether Ant-Man and the Wasp has a traditional villain, but several antagonists make Hank and Hope’s mission to rescue Janet difficult to carry out. There’s the sleazy middleman, Sonny Burch (Walton Goggins), and his band of truth serum-dispensing goons, all of whom work for an unnamed employer trying to steal Hank’s “quantum tunnel” technology. There’s the FBI agent (Randall Park) assigned to monitor Scott, ensuring he doesn’t break his house arrest, which, if he does, he’ll be jailed for a minimum of 20 years. And then there’s Ghost (Hannah John-Kamen), a mysterious gray-clad presence whose unstable phasing abilities allow her to pass through walls, cars, and people. She’s bent on acquiring Hank’s quantum technology because, if she doesn’t, she’ll dissolve into nothingness—and so she’s willing to go to dire lengths to get it. They’re all after Scott, Hank, and Hope, leading to several action sequences, a daring break-in or two, and a couple of ticking timers, each pulling the various parties (and the audience) in multiple directions.

The first Ant-Man—long-developed by Edgar Wright (Hot Fuzz), who eventually abandoned his work due to the franchise requirements of the MCU—contained a breathless connectivity between action scenes and humor. That effect is less evident in the sequel, which feels more slapdash and unimpressive on visual terms than its predecessor. Whereas the original probably had Wright’s detailed notes about visual bridges and gags that made the film so memorable, the sequel has been hastily assembled by editors Dan Lebental and Craig Wood. Some of the sequences are downright difficult to follow in a shot-for-shot logic. But the ingenuity of the Ant-Man and Wasp costumes, and their ability to increase or decrease size with the push of a button, gives way to inspired moments of visual irony: a giant Hello Kitty Pez dispenser, Hot Wheels toys that double as life-size racecars, and Hank’s lab that shrinks down to the size of carry-on luggage. Of course, as briefly demonstrated in Civil War, Scott’s ability to shrink to insect size is counteracted by his ability to tower as a 65-foot gargantuan.

Alas, if you’ve seen the much-advertised trailer for Ant-Man and the Wasp, you’ve previewed most of the action set-pieces, whereas the humor and character relationships remain the film’s draw. Once again, the standouts prove to be Scott’s coworkers, particularly the dopey and good-natured Luis, who shines in a sequence where he’s been given the aforementioned truth serum. The relationship between Scott and Cassie is endearing, and his ex-wife (Judy Greer) and her new husband (Bobby Cannavale) become less of an oppressive presence than pleasantly supportive this time around. Scott and Hope share a diminished romantic chemistry, unfortunately, as his betrayal—using the Ant-Man suit without Wasp’s help in Civil War—has created a wedge between them. Meanwhile, as Reed and his writers concentrate on humor and character dynamics, they forgo some of the established rules associated with the so-called “Pym particles.” Why, for instance, can one character remove his helmet in the quantum realm? Why can others shrink inside cars without having a special suit? Though the MCU has often jealously committed itself to story consistency, this film threatens some of that credibility for nit-pickers.

Nevertheless, after this summer’s epic and ultimately grim Avengers: Infinity War, Ant-Man and the Wasp provides comparatively light entertainment value, pleasant and not so consequential. The climactic sequence, after all, is a car chase that takes place on the steep streets of San Francisco. The filmmaking and plotting may not live up to Ant-Man or the usual cohesiveness of a standard MCU entry, but its humor is unrelenting and makes for two-hours of near-constant laughter. Small, inconsequential jokes (a running gag about Baba Yaga, a Slavic folk tale, pays off with the biggest laugh) dominate the film, leaving the show somewhat free of weight or import. But Rudd, ever charming, goofy, and sweetly funny, lends a human touch to the otherwise universe-shattering effects of the other entries in the MCU. Ant-Man and the Wasp demonstrates that not every film in the ever-expanding Marvel continuum needs to have grand consequences; they can also be a modest heist-comedy and still prove entertaining.