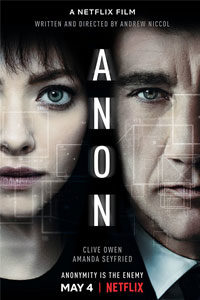 Netflix acquired Anon as their latest theater-worthy film turned into a TV movie. Writer-director Andrew Niccol’s yarn set in a dystopian future plays like an extended episode of Charlie Booker’s Channel 4 series Black Mirror—a technology-centric version of The Twilight Zone absorbed by Netflix in 2014. Fittingly, Niccol’s film uses an in a world concept that explores the dangers of integrating technology into the human processes of vision and thinking. Everything people see is recorded, turning one’s memory banks into a hard drive of sensory information that can be accessed at any time, even by other people with the appropriate permissions. Niccol uses this fascinating premise, and his usual attention to sleek aesthetic detail, to explore a familiar neo-noir story: a detective with a troubled past investigates a string of murders committed by someone capable of hacking into people’s heads and removing any trace of themselves. Neat ideas aside, the antiseptic quality of Anon, including predictable plot machinations, leaves the experience emotionally vacant.

Niccol often tells stories about the dangers of technology. His 1997 debut Gattaca featured a natural-born Ethan Hawke defying a rigid, genetically elitist culture by infiltrating the upper-crust, effectively warning audiences about the potential loss of humanity through genetic manipulation. His underwhelming S1m0ne (2002) considered the advancements in CGI technology when a Hollywood producer replaces his leading actress with a digital confection. More recently, Niccol’s thriller In Time (2011) proposed a class system in which our lifespan is connected to increments of time, and those with more wealth have more time, while the underclasses exist in a perpetual state of fear that their time will run out. (Niccol, never afraid to exploit a pun, riddled the story, starring Justin Timberlake and Amanda Seyfried, with lines like “Time’s up” and “I’m gonna clean your clock.”) Even Good Kill, Niccol’s 2014 take on drone strikes, weighs the dehumanizing effect of technology.

Viewers familiar with the works of Philip K. Dick, specifically Steven Spielberg adaptation of Minority Report (2002), will find some striking similarities in Anon. In a sprawling and cold metropolis, authorities have established a system that allows for better tracking of people’s actions, making any crime solvable. This all-knowing, all-seeing force, available on a web-like network called the Ether, requires everyone to be hard-wired with tech that detectives like Sal Frieland (Clive Owen) access and review. Sal can see both the victim and the suspect’s field of vision, quickly assessing the details of any crime from the first-person perspective of those involved, even the dead. But a hacker known only as Anon (Seyfried) has figured out a way to keep herself off the Ether, preserving her anonymity; it’s a service she also offers to her shady clients, who have dark secrets they want erased from their memory banks. Anon wipes these unpleasant experiences from the Ether and then, after sleeping with her clients, she kills them.

Per usual, Niccol comes up with a better high-concept setup than a story for Anon. The film offers several fascinating intricacies and uses for its central device. For instance, the eyes see things that aren’t there. Shooting mostly in Toronto and also New York, Niccol and production designer Philip Ivey have chosen spare urban landscapes with no advertising—no billboards, neon signs, or colorful storefronts, making it the antithesis of downtown Tokyo or New York—to create the film’s dour, gray world. By removing the oppressive presence of constant ads in the physical world, a person in Niccol’s film sees ads appear in their feed and, with a mere thought, can add or remove them from their field of vision. They also have total recall on their memories, as if their entire lives have been recorded on home video. To visualize this, Niccol and cinematographer Amir Mokri switch between aspect ratios, using a 1.85:1 ratio for first-person scenes in the Ether, while third-person shots occupy the wider 2.35:1 frame. Most of the film takes place in the first-person point of view, where the Ether appears in a series of white, weblike grids and access points, which places the viewer at a distance. Most interestingly, the film considers what happens when Anon hacks into Sal’s vision and makes him see things that aren’t there.

Niccol incorporates several noir tropes into Anon, including a stoic hero beleaguered by the memory of his lost son (another link to Minority Report). Owen occupies the role of a moody detective well, affecting that same disenchanted quality that served him in Children of Men (2006). Less successful is Niccol’s exploration of his femme fatale, largely due to the casting of Seyfried. As Sal comes in contact with Anon, a romance forms, but Seyfried is ill-suited to carry the mysterious, dangerous quality of a murderer that may or may not turn on our hero. It’s blatantly obvious that someone else is doing the killing, making the third act twist quite ineffective. What’s more, Niccol embraces the typical misogynist trappings of the noir genre. The film’s detectives refer to their unknown female suspect as a “bitch,” and the first-person recordings throughout the film often adopt the male gaze, with lots of female flesh on display, whereas apparently male bodies remain unviewed. And let’s not ignore the 20-year gap between the eventual onscreen coupling of Owen and Seyfried. The oppressive world of the future remains a distinctly male-dominated one, but not in a self-aware way that turns this detail into a commentary.

Niccol demonstrates an impressive control over his visuals and world-building skills, but his work as a storyteller and dramatist remain obvious and lacking dimension. The concrete jungle of Anon looks as barren and austere as his characters in their drab, albeit stylish costumes, while the characters themselves never have more than two dimensions, making some of the plot developments curious. (Why, for example, does Sal suddenly begin to question the social and ethical consequences of being connected to the Ether after years of using it to investigate crimes?) Additionally, Anon wants to be a sexual crime-thriller on par with Basic Instinct (1992), yet also instill Dickian psycho-technophobia reminiscent of Kathryn Bigelow’s underrated Strange Days (1995). But Niccol relies too much on surfaces and narrative clichés to distinguish his film from this well-mined territory. Perhaps if Black Mirror had not already explored such ideas, and films like Blade Runner (1982) and its sequel had not so thoroughly outlined dystopian neo-noir, then Anon might seem better. As is, the film takes an inventive idea squanders it on derivative storytelling.