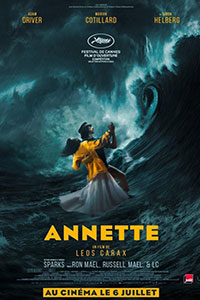 Annette, a musical by French director Leos Carax and based on a screenplay by Los Angeles natives Ron and Russell Mael from the band Sparks, opens with a song called “So May We Start?” Although it resembles those larger-than-life “Let’s start the show!” numbers that commonly launch musicals, complete with the leading players and contributors marching into the streets in a dazzling Steadicam shot, its meta-conceit cannot begin to signal just how strange and self-reflexive this film will become. “So may we start?” sing the performers, again and again, capturing how Sparks music often relies on hypnotic repetition. Then, they disperse across the city, presumably to find their marks because, after all, the whole world’s a stage. Even if the music never quite matches the catchy, toe-tapping playfulness of this initial song, the remainder of the 141-minute Annette fascinates in a trying-to-figure-out-what-I’m-watching sort of way. It isn’t easy to encapsulate because the film never stops its commentary on the nature of the movie musical, the relationship between spectator and performer, and how art reveals truth—all done from the inside out. Whether lost in pure expression, meta-ness, or self-awareness, it operates on multiple levels and leaves the viewer somewhat removed, if also fascinated, bewildered, and hungry for more.

Ever the experimenter, Carax’s career, marked by his daring and constant upending of expectations, has kept audiences and critics guessing about what he’ll do next. Since getting his start as a Cahiers du Cinéma critic with a bold argument in defense of Sylvester Stallone’s auteurism, Carax (a fictitious name) regularly blends the truth and fiction. His films from Mauvais Sang (1986) to The Lovers on the Bridge (1991) to Holy Motors (2012) attempt to disentangle how cinema and artifice have a better chance at exposing the essence of truth than, say, the conceit of so-called vérité style. Reality doesn’t have the same poetic flourishes or structural potential as art. Over nearly four decades, each of his six films has resolved to investigate the relationship between the real and artificial—namely, the cinematic. So his attraction to the Maels’ Annette makes a lot of sense; it’s a movie musical that underscores its artistic mode from the outset and continues to investigate various forms of representation, from opera to stand-up comedy to sporting event halftime shows.

Carax’s usual deconstructive idiosyncrasies—Holy Motors ended with a conversation between several parked limos, their voices signaled with flashing brake lights—aligns perfectly with the Maels. Sparks has been a pop-culture curiosity since the early 1970s; they’re an outsider band celebrated more in Europe than the US, so you can be forgiven for having never heard of them. Fortunately, Edgar Wright made an excellent documentary about their career earlier this year, called The Sparks Brothers, which will catch you up. Even though they remain curiously consistent as performers who reinvent their sound and looks every few years (their genres include glam rock, new wave, post-punk, synth-pop, and many others), the Maels have always engaged in a blend of theatrical performance and lyrical dimensionality. It might seem like their quirkiness is just nonsensical fun until Ron’s lyrics expose a sensitivity beneath its ironic and performative gestures. Both avid arthouse film fans, the Maels have been trying to cross over into cinema for years, having spent years on stalled projects with Jacques Tati and Tim Burton. Perhaps it’s for the best; Carax is a better fit. 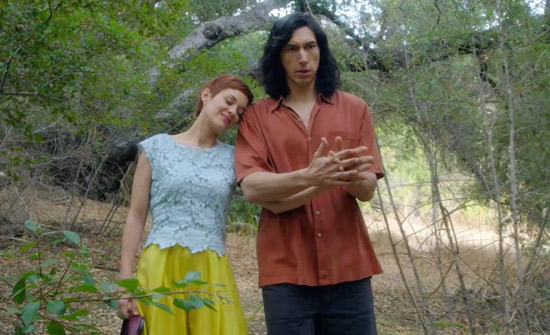 Like Sparks’ music, Annette unfolds with a persistent discussion about form, content, and their relationship. “We now ask for your complete attention,” announces a voice over the opening Amazon Studios and production company logos. “If you want to sing, laugh, clap, cry, yawn, boo, or fart, please do it in your head, only in your head. You are now kindly requested to keep silent and to hold your breath until the very end of the show. Breathing will not be tolerated. So please take a deep, last breath right now.” Then we hear an audience inhale, followed by silence. And after “So may we start?” we finally meet our “Beauty and the Bastard” characters: Henry McHenry (Adam Driver), a stand-up comedian in a relatively new romance with apple-munching Ann Desfranoux (Marion Cotillard), a singer who performs opera, “where everything is sacred” notes one lyric. Henry’s role in stand-up, where nothing is scared—he calls it, “the only way I know to tell the truth without getting killed”—seems to suggest these lovers are doomed given their respective artistic stations in the satiric and sacred. Their song “We Are So in Love,” set in a montage that brings to mind Agnès Varda’s Le Bonheur (1965), hints that their relationship might turn sour.

As a musical, the film takes the Andrew Lloyd Webber approach of turning most dialogue into performed lyrics, with only the occasional digression. Carax and cinematographer Caroline Champetier, who also shot Holy Motors, follow the characters’ active movements in long, immersive, fluidly delivered shots. Though, the filmmaker isn’t opposed to jump cuts, rear-projected images, and periodic cutaways to reports from SBN (“show biz news”) to keep the viewer on edge. An apt comparison is the musical cinema of Jacques Demy, whose pastel-colored worlds gave way to a grim and realistic outlook. Annette made me think about Demy’s The Umbrellas of Cherbourg (1964) and Donkey Skin (1970), films that acknowledge how blithe, fantastical musical traditions demand some reconsideration with a touch of reality. But given the constant singing, few individual songs distinguish themselves. As for dancing, there’s little to be had, even if the actors’ movements feel highly choreographed to achieve a stagelike performance. Carax, who won the Best Director prize at the Cannes Film Festival for his work here, keeps the visual presentation incredibly active. To call it one of his most ambitious films in a career of ambitious films is no overstatement.

Annette dwells on the relationship between performer and audience, both within and without the diegesis. Note how Carax devotes long sections to Henry’s stage routine—which look like what would happen if Bo Burnham became angrier, buffer, and more self-destructive—and how they dominate the film. His acerbic show, called “The Ape of God,” during which he paces about the stage in a loosely tied robe and boxer briefs, entails meta-style observations about comedy, fictionalized confessions, mordant self-hatred, backup singers, and infrequent jokes. Performing in Las Vegas, he admits, “Trying to be funny here is like trying to enjoy a blowjob in a gas chamber.” It’s curious to think how he became a celebrity comedian with a devoted fanbase to begin with, but there’s nothing plausible about Annette. In any case, Carax shoots these sequences from the audience’s perspective, and it feels like we’re at a live recording of Henry’s act. They’re oddly absorbing, in part because of Driver’s kinetic and raw performance, among his best. Then he starts singing to his audience, and they sing back as part of an agreed-upon contract. When he starts to get too real, however, they turn on him. 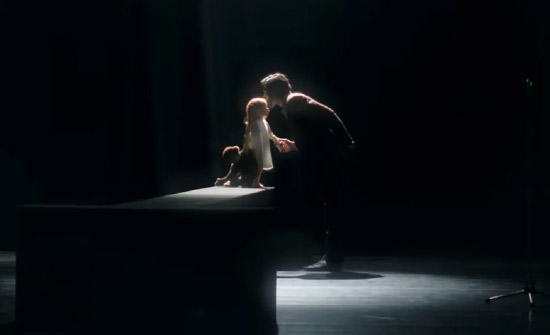 The film considers Henry and Ann’s lives on stage and at home, confronting how performance and perception eventually corrupt the personal. Soon, they marry and have a child named Annette. The baby, a puppet with a dozen or more points of visible articulation, stands as a persistent symbol, somewhat relative to the conceit of Anomalisa (2015). Of course, it’s bizarre to see actors of this caliber interact with a doll-child, but the dehumanized metaphor never loses its potency. Following the trajectory of a grand tragedy, Annette takes a downswing with a couple of murders, the exploitation of a minor for entertainment purposes and wealth, and Henry’s eventual hatred of what he’s become in the spotlight. Even after the film meanders in the second half, turning Ann into a haunting sea monster and switching the focus to her accompanist (Simon Helberg), its concluding scene reframes the entire film with surprising emotional weight. For all Annette’s post-postmodern deconstructions of the movie musical and performance in general, Henry’s final song with the in-person Annette (Devyn McDowell, excellent) brings the film to a place of surprising profundity.

File Annette under the category, “Too weird not to admire.” It seems to exist at once outside the musical mode and within it, commenting on the very genre it dissects and its absurdities, even while singing its praises. Every sequence, every scene inhabits a self-contained world that invites examination. Carax and the Maels delightfully swirl in the deviations of reality, stagecraft, and expression that prove intractable from musicals. As a result, the project might feel too mannerist or self-aware for some; its almost Brechtian approach keeps the viewer at a distance, even while Driver and Cotillard—and the fabricated Annette, of course—compel our emotional investment. The whole thing may feel overlong on first viewing, especially after Cotillard all but disappears in the second half, leaving only Henry’s anger and jealousy, along with the persistent idiosyncrasies of the Annette-doll. But somehow, the film, which admits to being “a little vain” in the opening song, manages to keep us engrossed throughout, regardless of its many indulgences. In the end, Annette resolves its interplay between reality and artistic expression with such a grim downbeat that it cannot help but reframe the entire experience. That we’re eager to watch it again, and soon, is a testament to this peculiar, admirably irregular, and remarkably made film.