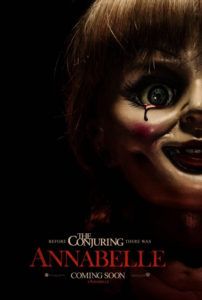 Annabelle is a low-budget, fast-tracked prequel to last year’s The Conjuring. Its filmmakers were apparently so concerned about getting the new movie out while its predecessor was still fresh in viewers’ minds that they overlooked, or didn’t have time to rewrite, writer Gary Dauberman’s sloppy script. Here’s a movie in which much of its runtime is spent brooding on a creepy, motionless doll. And between shots of the doll, moviegoers are forced to sit through a tired procession of supernatural horror clichés: creaky floorboards, a faulty elevator, a static-ridden TV, a scratchy record player, unattended Jiffy Pop that bursts into flames, characters who explore mysterious sounds in the dark, and, of course, unsettling dolls everywhere.

The Conjuring was an effective haunter driven by Ed and Lorraine Warren, real-life paranormal investigators played by talents Patrick Wilson and Vera Farmiga, whose characters had some deeply personal issues to work through. But for Annabelle, director John R. Leonett gives his cast of unknowns the thankless task of interacting with an immobile doll, which is featured in lingering shots of its eerie visage. If you remember, the doll was pure evil, and the Warrens locked it up in a glass case in a room that was blessed twice a month by a priest. Annabelle is the doll’s underwhelming origin story and lacks the intrigue of the Warrens or the talented actors portraying them. In their place, Ward Horton and Annabelle Wallis play the happy couple John and Mia, and like another famous Mia in cinema history, she’s convinced someone or something is after her baby.

Except, unlike Rosemary’s Baby, the script for Annabelle has not one iota of paranoid comedy coursing through its veins, and Wallis isn’t half the talent of Mia Farrow. When the movie opens, John studies to land a doctoring job, and Mia, very pregnant, worries about their future. After a lovers quarrel, he gives her a present intended for when their baby arrives—a collector’s item doll about three-feet high, with a face fit for Satan’s offspring. A doll enthusiast, Mia loves it and places it in the nursery next to her countless others. But the doll isn’t so cute after they’re attacked by a Manson Family-like occult group and one of its members, named Annabelle, slits her own throat while clutching the doll. Afterward, Mia doesn’t want the doll anymore, believing it absorbed some bad mojo from the cult, so John throws it away.

To start over, they move to a new apartment with wood floors so creaky it’ll make you wonder why demons never haunt anyone with carpeting. Of course, despite John tossing the doll, it shows up in their moving boxes. Mia accepts this with a shrug and puts the dirtied doll back on display in their new baby’s nursery (always the best place for a demonic doll). Before long, startling things begin happening to Mia. Her record player inexplicably turns on, she hears whispers, and she barely escapes being trapped in their storage room with a pitch-black demon. And reading this movie’s equivalent of All of Them Witches, as provided by a local bookstore owner (Alfre Woodward), doesn’t help her dispel the haunting—neither does talking to John’s favorite local priest (Tony Amendola).

Standard jump-scares are induced by Joseph Bishara’s loud string score, which jolts into our eardrums like a sudden thunderclap and can’t help but make us leap out of our seats. It’s the equivalent of coming up behind someone and yelling “Boo!” into their ears with a bullhorn—it’s not scary, per se; it’s a physical reaction. It’s also the lowest possible form of horror. As for genuine scares, there are none. Nothing about the material is fresh or even slightly innovative. And the characters prove so incredibly bland and featureless that they barely stimulate our sympathies. Wallis ekes out a smidgen of pity because she’s either pregnant or a new mother, but the role itself is tedious. Meanwhile, Horton seems to have arrived new off the factory line, his servos humming along and replicating human behavior nicely.

But it’s not merely that Annabelle is unoriginal. After all, countless effective horror movies employ the same old devices but apply them in a confident or skilled way (The Conjuring is a prime example of this). Not long into Annabelle, it becomes apparent that the filmmakers believed an inanimate object could carry the entire movie. Leonetti relies on the increasingly scary-looking doll to fill entire scenes, framing the immobile thing in the ultra-near foreground or out of focus (but jarringly present) in the background. The treatment here doesn’t bother trying to put a new spin on such familiar modes, nor does it exhibit the slightest hint of style or vision. Its characters and situations are lackluster and lazily assembled, and it all plays out in a predictable fashion. Fortunately, the movie avoids resorting to another drawn-out exorcism sequence, but in its place is a final tiresome formula—an all but guaranteed promise of a sequel.