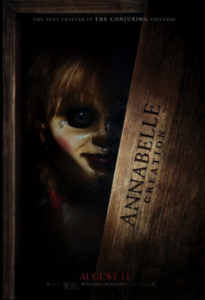 About midway through Annabelle: Creation, a young orphan girl named Janice enters a forbidden room in the elaborate, isolated country house that now serves as an orphanage. Owned by an older married couple who lost their daughter years earlier, the place comes haunted-house-complete with creaky floorboards, locked doors, shadows in every corner, an eerie record player, and mysterious sounds at night. Janice investigates one of those sounds and finds the ghost of the owners’ late daughter looking out the window, tapping at the glass. The apparition speaks: “Will you help me?” Janice, all too accommodating, replies, “What do you need?” The girl turns, but her child’s face has been replaced with a hellish, horned demon with yellow eyes. “Your soul!” the creature howls. Meanwhile, the audience in my screening, rather than react as intended by this jump-scare, bursts into unintended laughter.

A prequel to Annabelle (2014), which was a spin-off of The Conjuring (2013), Annabelle: Creation is being touted as part of the newly christened “Conjuring Universe.” New Line Cinema and producer James Wan have established this multi-film series around paranormal investigators Ed and Lorraine Warren, as well as the backstories of the ghosts they have exorcized. The Annabelle doll belongs in the latter camp, alongside The Conjuring 2‘s demonic nun and the crooked man, both of which are getting their own spin-offs (and, no doubt, prequels to their spin-offs). Not that any of this interconnectivity to the other films is really important for Annabelle: Creation to work. Aside from a few disposable nods to later events and a scene near the end, the origin story functions as a stand-alone haunted house tale, situated in a rural 1950s America setting. (All titles in the “Conjuring Universe” are period films.)

Twelve years after a prologue in which doll-maker Samuel Mullins (Anthony LaPaglia) and his wife Esther (Miranda Otto) lose their daughter (Samara Lee) in a tragic accident, they open their idyllic house to Sister Charlotte (Stephanie Sigman) and six giggling orphan girls. Samuel has since become the lumbering custodian in his own home, while Esther remains bedridden and, mysteriously, behind a porcelain mask. The story follows the two outsider orphans, Janice (Talitha Bateman), who is recovering from polio, and Linda (Lulu Wilson). They absurdly talk to each other like middle-aged friends, weathered yet closer for their shared years of parentlessness. When exploring the Mullins home one night, Janice finds the creepy Annabelle doll locked in a closet whose walls are lined with pages of the Bible. As you might imagine, opening the closet door unleashes the contained evil, releasing supernatural horror in various forms, including a particularly fearsome spectre.

If Annabelle: Creation deserves any praise, it should be centered around the fact that, unlike its spin-off predecessor, the film doesn’t spend copious amounts of time dwelling on an immobile doll. Director David F. Sandberg (2016’s Lights Out) and screenwriter Gary Dauberman treat the doll as a conduit for other, ghastlier things. After all, Patrick Wilson’s character from The Conjuring tells us Annabelle never existed; it was always a demonic spirit, hungry for souls, using Annabelle. And so, we see black, animal-like fingers with hideous nails reaching out of the dark; shadows that move like sentient liquid; glowing eyes in the night; and a nightmarish scarecrow that we just know is going to come alive at some point. Most effective is the Mullins family’s version of hide-and-seek, which they used to play with their daughter. Janice finds scraps of paper that leave clues; the first note slipped under a door reads “Find me,” leading to the inevitable, unsettling arrival of another clue: “Found you.” While such children’s games are common in horror fare (The Conjuring used a clapping game), this film seems perhaps too close to The Orphanage‘s nerve-racking “One, two, three… knock on the door.”

Sandberg exploits the rich locations around the house for atmosphere, from the expansive hills that create a sense of isolation to a dusty work shed and an ominous well. Early on, cinematographer Maxime Alexandre introduces the viewer to the house with an elaborate shot that maneuvers the rooms, assembled through editing to appear like an extended take. It’s a marvelous moment in an otherwise dull film. No matter how capable the formal delivery, the characters and situations in Annabelle: Creation feel emotionally hollow and regurgitated from better material. Unlike last year’s successful prequel Ouija: Origin of Evil (also starring Wilson), this female-centric spookhouse shocker plays in generic and silly, if not wholly laughable ways, as opposed to telling a story about characters we care about. And while defusing laughter often accompanies this sort of material, it’s best employed when we’re not laughing at the film.