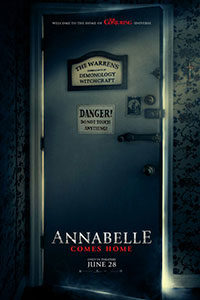 Annabelle Comes Home is a cabinet of curiosities less interested in its titular demonic doll than all the other spooky things lurking in the protected room of Ed and Lorraine Warren (Patrick Wilson and Vera Farmiga). The paranormal investigators and exorcists of New Line Cinema’s ongoing “Conjuring Universe,” the Warrens have put all manner of cursed trinkets and possessed objects into a single room, which is blessed by a priest once a week. Inside, the ishy doll Annabelle, introduced in 2013’s The Conjuring, sits behind a glass case, unmoving, yet quietly raking in millions for the franchise. Perhaps the only cinematic universe besides the MCU to continually perform well at the box office, the Conjuring Universe’s seven movies so far have seen sequels, spinoffs, and prequels. After two previous Annabelle-centric movies, Annabelle Comes Home shows the creators getting bored with the concept but unable to ignore the opportunity cost of not exploiting the intellectual property.

The movie seems to take place between The Conjuring and The Conjuring 2 (2016), in the 1970s, and the Warrens appear only briefly in the movie’s prologue before leaving for a weekend trip. Their daughter, Judy (McKenna Grace)—an adolescent who is disturbed because she, too, sees dead people—is left alone with Mary Ellen (Madison Iseman), a trusted babysitter. Daniela (Katie Sarife), Mary Ellen’s friend, recently lost her father in a tragic car accident. She hopes to contact him by sneaking into the Warrens’ room of evil artifacts. Ignoring the demonic tarot card and blatant warning sign on Annabelle’s glass case (which subtly reads “Positively Do Not Open”), Daniela opens the case and unleashes all manner of things that go bump in the night.

However, it’s not Annabelle that everyone should be worried about—at least not initially. As Lorraine establishes early in the proceedings, the doll is “a beacon for other spirits.” And so, when Daniela opens the Warrens’ locked room, Annabelle Comes Home drifts off into tangential hauntings by several other demons—and each will probably have its own spinoff, sooner or later. Watch out for the Hellhound, a werewolf-like fog monster. Beware the samurai armor that contains the screams of its victims. Run from the cursed wedding dress that turns its wearer into a knife-wielding murderess. And try not to have nightmares after facing the cymbal-clanging monkey, the go-to of all creepy toys. Each of them lashes out at Judy and her babysitter. The most likely candidate for a spinoff is the Ferryman, who comes equipped with his own tagline: “You pay his toll, or he’ll take your soul.” But the real threat is Annabelle, who is less scary than the black-as-pitch demon with ram horns who moves the doll, hoping to freak you out enough to swallow your soul.

Gary Dauberman, who wrote Annabelle (2014), Annabelle: Creation (2017), and The Nun (2018), takes on directing duties in addition to penning the screenplay. Dauberman relies on a familiar bag of tricks for today’s supernatural horror movie, beginning with a car that runs out of gasoline in front of a cemetery where the fog machine has gone haywire. Elsewhere, the Warrens seem to have chosen a home that was designed and decorated like one of the haunted houses they usually investigate, complete with squeaky floorboards, unreliable lighting, a record player on the fritz, and crosses that fall from their spot on the wall to hang upside-down. It’s all shot in an ugly brown soup of drab lighting that makes the visual experience impossible to enjoy. Worse, the script doesn’t do anything exciting with these elements. Inside the haunted house, Judy and Mary Ellen follow breadcrumb sounds in the dark with an unreliable flashlight, only to find a jump-scare. Of course, Mary Ellen also has asthma, which facilitates the obligatory moment when someone has to submit themselves to danger to recover her inhaler.

Given the presence of Ed and Lorraine early on, and the warm performances by Wilson and Farmiga who enrich the otherwise hackneyed material, Annabelle Comes Home starts well enough. But after the Warrens disappear (Wilson and Farmiga are shooting The Conjuring 3, due in 2020), it’s a challenge to maintain interest. When eventually they return to the movie in the final scenes, it’s apparent how they hold the franchise together, whereas the mostly child victims in the spinoffs and prequels hold zero interest. This is unfortunate, as most entries in the Conjuring Universe focus on female characters ranging from young children to adult women, whereas the men, such as Ed, or this movie’s charming love interest “Bob’s got balls” (Michael Cimino), tend to be goofy or romantic characters seen, at times anyway, from a more central female perspective.

Annabelle Comes Home is easily the best of the three Annabelle movies, which makes it one of the better additions into the overall Conjuring Universe. That isn’t saying much. Dauberman’s direction is competent enough, and Grace has some obvious talent. But none of this matters. The series is about using good marketing to ensure maximum returns on opening weekend. The rest—storytelling, characters, acting, filmmaking—is unimportant. At its essence, Annabelle Comes Home is all about the different evil spirits that show up, each capable of becoming their own intellectual property. It’s as though the producers have asked the audience, Which one of these do you like most? The Hellhound or the Ferryman? The evil dress or the samurai armor? You let us know, and in about a year or so, we’ll make a movie about it. And while another spinoff sounds like a dreadful prospect, the next case by Ed and Lorraine Warren is much anticipated.