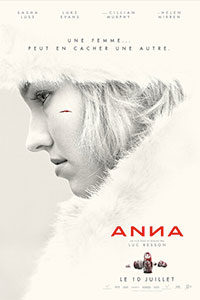 Watching Anna, one imagines that director Luc Besson saw both Atomic Blonde (2017) and Red Sparrow (2018) and then decided to put his spin on the beautiful Russian spy movie. Both have an unmistakable influence on Besson’s latest shoot-em-up, which casts supermodel Sasha Luss as a Soviet agent trained in gunplay, hand-to-hand combat, and high fashion. It sounds promising until you realize the French filmmaker already explored super spies and assassins to sublime effect in La Femme Nikita (1990) and Léon: The Professional (1994). Maybe Besson needed a return to familiar territory after the financial disappointment of his 2017 sci-fi epic Valerian and the City of a Thousand Planets, with its $200 million budget and generally underwhelming reception. Though, Anna is hardly the return to form the director needed; it’s a self-satisfied work of lowbrow action that presents itself as thoughtful, inclusive, and even feminist. The movie passes the Bechdel test, but that doesn’t mean Besson avoids ogling Luss throughout.

The story, set in the last few years of the Soviet Union, follows Anna, a poor woman caught in the patriarchal society of Moscow, where the KGB eventually recruits her. Handled by Alex (Luke Evans) and the skeptical veteran Olga (Helen Mirren), Anna undergoes extensive training to become a ruthless killer. And so, of course, her first assignment abroad involves going undercover as a Parisian model. Besson seems to delight in balancing the absurd modeling world of demanding photographers and pansexuality with Anna’s various objectives, almost all of which involve her entering a room with a runway strut and coldly executing her target with a silenced weapon. After completing several missions in Paris, Milan, and elsewhere, Anna realizes that she will never get out from under the heel of her KGB overseers. To get free, she arranges a deal with a CIA agent (Cillian Murphy), who promises the freedom that her Soviet comrades denied her. As Roger Daltrey sang, “Meet the new boss, same as the old boss.”

Besson is less interested in story than constructing over-the-top action scenes. One impressive sequence shows Anna eliminating a dozen or more goons in a restaurant, and the choreography cannot help but evoke the stairway sequence from Atomic Blonde. Later, Anna walks through KGB headquarters, blowing away countless soldiers who behave as though they’ve never handled a gun before. Generally speaking, Besson plays it fast and loose with logic and plausibility; this applies to the production design as well. Anna takes place between 1985 and 1990, but somehow characters use laptops and carry cell phones reminiscent of early 2000s technology. It’s the sort of detail that makes you think you missed some vital shift in the setting, except the presence of INXS and Technotronic on the soundtrack would suggest otherwise.

Structurally, Anna is one of the most absurdly arranged movies in recent memory. Every fifteen minutes or so, Besson fades to black and flashes titles that read “Three Years Earlier” or “Six Months Later” or “Three Months Earlier,” making any hope of linear progression unlikely. The leaps in time serve Anna’s twisting motivations from agent to double agent to triple agent and beyond. Besson seems to delight in refiguring his characters’ motivations with a quick flashback or flashforward to reset the present, which is all in the past. It’s not that the viewer has any trouble keeping these matters straight. Besson is a skilled filmmaker and, at the very least, presents each of these leaps in time with clarity in the overall story. What doesn’t work about them is their frequency. One or two temporal tricks would have been sufficient; but after the fifth or sixth time, it becomes tedious, if not somewhat exasperating. The structure serves the plot, delivering several gotcha moments, while at the same time doing a major disservice to the character.

What’s so unfortunate about Anna is the missed opportunity it represents in its failure to create a strong heroine. Whereas Charlize Theron and Jennifer Lawrence had the acting chops to make their performances the best aspects of the overcooked Atomic Blonde and Red Sparrow, this marks only the second performance by Luss, who previously appeared as an alien in Valerian. Besson desperately wants Anna to be a complex protagonist with layers—to the extent that his screenplay openly compares her to a Russian nesting doll (Anna is a spy, a lover, a model, an assassin, etc.). But aside from her various jobs and pastimes, or showing her beating up countless men, she does little more than float where the story takes her. That Besson treats Anna as eye candy who enjoys bedding her handlers in silly sex scenes doesn’t help strengthen her character either. Moreover, Luss simply doesn’t have the presence of her Oscar-winning counterparts, leaving the personality of the film to Mirren, Murphy, and Evans. What might have been an intriguing spy yarn with a different director and star becomes another Besson disappointment.