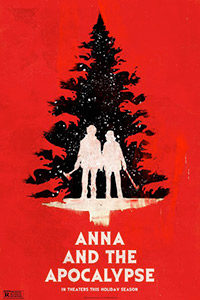 Anna and the Apocalypse is touted as a Christmas-themed zombie musical, three disparate elements that, when combined, appeal to a variety of niche audiences. Self-consciously designed for cult consumption, it’s the kind of genre mash-up that seems inspired for its unique concoction, yet it fails to deliver any of its three basic components. The result reminded me of the lame Repo! The Genetic Opera from 2008, a dystopian rock opera about a future in which people must rent working organs on loan, as both movies assume their hybrid concept is enough to attract audiences. (And perhaps they are, since the earlier movie is already a staple at midnight madness screenings throughout the country.) Nevertheless, Anna and the Apocalypse isn’t a particularly festive Christmas movie; it’s zombie violence and thrills feel mostly airless, lacking danger or suspense; and the music throughout has a generic quality that, besides one or two catchy numbers, won’t inspire the sort of urgent rush to purchase the soundtrack that a good musical should.

The movie is based on the 2011 short film “Zombie Musical” by the late Ryan McHenry, who died in 2015 of osteosarcoma, and to whom this feature-length version is dedicated. McHenry and co-writer Alan McDonald began to adapt the short before his death, but directing duties eventually went to Scottish helmer John McPhail. Unfortunately, McPhail brings an undue polish to the proceedings, whereas McHenry’s original short managed to produce catchier music, more intense zombie mayhem, and a greater sense of danger in the span of its 17-minute runtime. Anna and the Apocalypse seems to have had its bumps and corners sanded down to a smooth, intentional surface—it resembles an R-rated version of High School Musical—whereas something gritty and edgier may have better suited the material. Meanwhile, the low-budget production values, including Sara Deane’s bright and crisp cinematography, give the movie a stagey appearance that’s more musical than zombie nightmare.

Take how McHenry’s short establishes the juxtaposition of airy musical and zombie horror within its first few seconds, where the peppy high school student named Anna (Joanne McGuinness) wakes in the morning, oblivious to the apocalypse unfolding around her. By contrast, McPhail spends the first 15 minutes or so of Anna and the Apocalypse establishing the canned characters of an otherwise straightforward popish teen musical produced by Disney. Anna, here played by Ella Hunt, dreams of taking a trip to Australia, though her disapproving father (Mark Benton), her school’s janitor, wants her to attend university. Anna’s friend John (Malcolm Cumming) desperately wants to get out of “best friend” territory with her, while her ex, the bullying alpha-dude Nick (Ben Wiggins), thinks he still has a chance. And the American lesbian Steph (Sarah Swire), their school’s resident social activist, just wants people to acknowledge the homeless problem in their small British town.

After their respective desires are established in a few obligatory “I want” songs, these stock characters realize that zombies have invaded their small town. McPhail delivers a sequence that attempts to replicate the centerpiece of McHenry’s short, where Anna walks to school and remains blissfully unaware of the horror that’s overcome her neighborhood—a sequence clearly inspired by scenes in Shaun of the Dead (2004)—but the movie’s treatment doesn’t have the same dynamism or irony. The plot situates itself on the teens’ efforts to reach school, where their parents have holed-up under the headmaster, Mr. Savage (Paul Kaye), who becomes increasingly insane and domineering, as men of power often do in zombie movies. But even after the teens reconnect with their parents, they realize it’s a worldwide epidemic, leading to a sense of hopelessness embedded into the material. The Christmastime backdrop, evident in a few set-pieces, is best represented in a sultry song, the movie’s best, filled with raunchy lyrics and suggestive hand motions, performed by Lisa (Marli Siu) at the school’s Christmas talent show.

Swire, also the dance choreographer, supplies a few lively moves such as these, but McPhail’s flat direction services each of the movie’s genres with an exceeding blandness. Although Anna and the Apocalypse hopes to provide an irresistible mix, the most important to the success of the movie must be its music, whereas the zombies and holiday cheer remain supplementary—present to establish the movie’s requisite irony. Alas, the songs are unmemorable, most of them occupying a banal pop-music genre that refuses to distinguish itself. In the best horror-musicals, from The Rocky Horror Picture Show (1975) to Little Shop of Horrors (1986) to Andrew Lloyd Webber’s The Phantom of the Opera, the music is an irreplaceable component that, even if the story doesn’t work, will draw the viewer into the proceedings. But Anna and the Apocalypse‘s soundtrack fades the instant the movie is over, and its insufficient helpings of Christmas spirit and zombie terror make the material better in concept than execution.