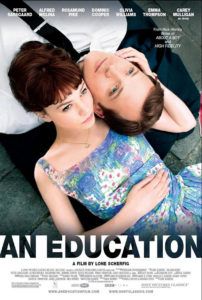 Literature has had more than its fair share of tales told about young women seduced by older men only to discover that the men are indeed scoundrels. Trouble is, 16-year-old Jenny (Carey Mulligan) probably hasn’t read them. Her father doesn’t allow any reading or hobbies outside of her school curriculum, as she’s bound for Oxford and daren’t waste the money he’s spent on her private schooling on such trash. Jenny is bright, the top of her class, and passionate about someday getting free of her airless parents (Alfred Molina and Cara Seymour), heading to France where she can smoke, read what she wants, wear black, and someday fall in love. If only life was really like that.

An Education takes place in the stuffy setting of Twickenham, a London suburb, in 1961. The setting makes it believable that Jenny might want to escape her drab surrounding for a little adventure and romance. One day she’s rescued from the rain by a suave thirtysomething man who talks to her about her cello and familiar composers. His name is David (Peter Sarsgaard), and he speaks with a knowledge and experience of culture and art that Jenny admires. Soon he’s taking her to concerts, posh nightclubs, art auctions, and then miraculously convincing her parents to allow her to go away for the weekend (under the pretense of a mentor, of course). She drinks and smokes with David’s stylish friends, Danny (Dominic Cooper) and Helen (Rosamund Pike), and for the first time, she feels alive.

Whispers around the school about Jenny’s relationship with an older man reach the staff, and her wise but seemingly sheltered teacher (Olivia Williams) voices her concern. But Jenny is too swept away to listen to anyone else. She even ignores her own doubts when David confesses what he does for a living, a rather underhanded trade. David simply feels right. All her work in school, her dream of going to Oxford, she doesn’t know what that’s for. Will she graduate with a degree and become like one of her starchy teachers? Jenny doesn’t want to be bored; she wants to live. David allows her to do so, and she loves him for it. Even her oppressive father is charmed by David the snake, if only because if she marries David, it saves him having to pay for Jenny’s expensive Oxford tuition.

Of course, the other shoe drops and that’s where the life-lesson of the title comes into play. Director Lone Scherfig (Italian for Beginners), who along with Antichrist auteur Lars von Trier is one of the Dogma cinema movement, tells the story with a manipulative calm. The story grows subtly and doesn’t apply the melodrama in too course a manner. The audience believes for a time that David is the best choice for Jenny. Nicholas Hornby (About a Boy, High Fidelity) based the screenplay on the memoir by journalist Lynn Barber, and together he and Scherfig present a believable, strong character in Jenny that ultimately proves better for the experience, despite the unfortunate but necessary lessons she learns in this coming-of-age tale. The only moment where the film loses the audience is the final scene, which wraps things up with the all-too-familiar device of over-explanatory narration.

Carey Mulligan’s breakthrough performance in An Education deserves the affection it’s getting, and serves as the film’s easiest selling point. She’s supported by an amazing cast, most notably Molina’s father character and Emma Thompson as the no-nonsense headmistress of Jenny’s school. But this is a film that might not have worked on the level it did without Mulligan, whose prior acting experience is summed up by lots of British television and small roles in 2005’s Pride and Prejudice and last year’s Public Enemies. But Mulligan has an effortless way of communicating her character’s emotions through her eyes, or through her dimple-inflected smile, so that the audience always knows what she’s thinking. It’s through Mulligan’s lucid communication as an actress that the film works on such a profound level for the majority of its runtime, and it’s why people should be rushing to take in what she—more than the smart screenplay or blithe direction—offers onscreen.