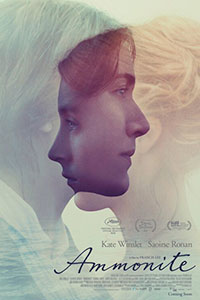 In his 2017 debut God’s Own Country, writer-director Francis Lee focused on the queer romance between a sheep farmer and a Romanian migrant worker in Yorkshire. While his subject matter critiqued nativism and traditional masculine archetypes, his aesthetic proved distinct, focusing on intimate close-ups, an immersive sound design, and restrained emotions contrasted by scenes of unflinching eroticism. Lee delivers a variation on a theme with his sophomore effort, Ammonite, another story about forbidden love, this time centered on a real-life figure, British paleontologist Mary Anning. Although it imagines an affair between Anning and a young woman that has no basis in fact, Lee captures the inward and stoic temperament of an independent, strong-willed woman of the mid-nineteenth century. Anchored by Kate Winslet and Saoirse Ronan’s perfectly tuned performances, the film carves out the layers of decorum, class, and personal inhibitions to find something true at the center.

In 1811, Mary Anning, then 12 years old, discovered the fossilized skeleton of an ichthyosaur, a marine reptile, and earned some notoriety in the male-dominated scientific community for her specimen, which ended up in the British Museum. Thirty years later, Mary (Winslet) lives a solitary life, running a small fossil shop in Lyme Regis with her ailing mother (Gemma Jones). She spends her days searching the cold beaches for signs of spiral fossils to prepare for sale. Hardened by personal and professional betrayals, she has resigned herself to this life, convincing herself that she needs it. Although she’s an outsider in her own town, Mary is not without admirers. Geologist Roderick Murchison (James McArdle) offers to pay to watch Mary work—to observe her method of locating stones and meticulously scraping away rock to reveal the treasures inside. She agrees, if only because she needs the money. Murchison eventually returns home, leaving behind his seemingly fragile wife, Charlotte (Ronan), who has a case of melancholia and fever, and pays Mary to watch over her.

What ensues is a quiet friendship between two women that slowly becomes a love affair. Our perspective remains with Mary, who dismisses the subtle flirtations of a handsome doctor (Alec Secareanu). She was also tempted in the past by an older woman, Elizabeth (Fiona Shaw)—who observes that Charlotte “seems to have unlocked something in you I couldn’t.” Mary gives out her affection reservedly, and Winslet does a terrific job at communicating her character’s inner life with stony expressions and subtle gestures. By contrast, Charlotte hasn’t had her heart broken yet; she’s young and driven by her passions. That energy helps free Mary from her prison, which is part self-imposed, part a condition of being an unconventional and nonconforming woman in the patriarchal society of nineteenth-century England. Somehow, Charlotte seems fearless about her desires for Mary, despite living in a society that considers them a crime. 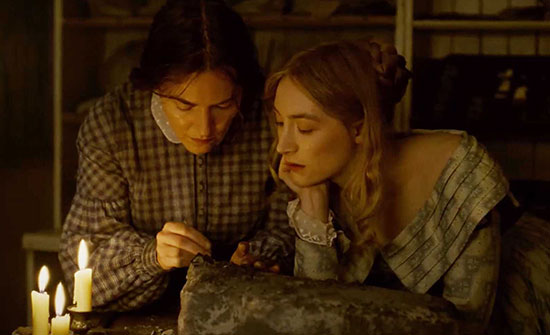 This setup makes the titular metaphor unmistakable, even heavy-handed at times. Charlotte must chip away at Mary’s defenses to locate the person inside, just as Mary spends hours hunched over a hunk of rock to uncover an ichthyosaur. But if Mary is a fossil that demands work to reveal, Charlotte lives in the prison of her unhappy marriage—another image Lee over-accentuates. At one point, Charlotte observes a moth imprisoned under a cup, pinging the glass to escape. Later, Charlotte’s home is compared to a gilded cage. Like most of the visual symbolism in Ammonite, the imagery is not subtle, but it effectively conveys the social conditions of the period. Still, one of these associations would have been enough, namely the one involving paleontology. When eventually the two free themselves in private, it’s with an appropriate outpouring of raw and passionate eroticism, in scenes choreographed by the actors to avoid catering to the male gaze.

Lee’s aesthetic is a combination of caution and excess. Cinematographer Stéphane Fontaine shoots in a geological color palette, using a handheld style that puts us in the moment. More inspired is the film’s sound design. From the outset, Lee makes us hyper-aware of every aural detail, amplifying each breath and footstep, the rustling of clothes, and the echoes in Mary’s empty rooms. The technique steeps the viewer into Mary’s subjectivity, how there’s little else to fill her life besides the deafening everyday. For scenes on the beach, Lee turns up the booming sound of wind and waves, drowning out the conversation between Mary and Charlotte, which echoes their effort to connect. The approach also emphasizes the film’s mostly recessive score by Dustin O’Halloran and Volker Bertelmann, which, when present, feels overdone if only because it marks a sharp contradiction to the heightened sound mixing and confronting absence elsewhere.

Between Ammonite and God’s Own Country, Lee has made two strikingly similar films, even though they take place a century apart. In both, he examines guarded people who find a source of love and sexual awakening, and his films convey that with an inspired interest in repression and bursts of intense affection. Lee’s metaphoric touches might seem self-conscious if not for the natural, thoughtfully considered performances by Winslet and Ronan, who make every moment believable. They convey so much in discrete movements and muted words, lending their characters dimension in every scene. When they meet in the great last moments, which sums up their flaws, confinement, and potential in a single image, you realize that Lee’s overreaching symbolism is nonetheless powerful.