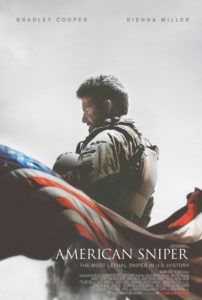 During an early scene in director Clint Eastwood’s American Sniper, Chris Kyle’s father tells his preteen sons that there are three kinds of people in this world: sheep, wolves, and sheepdogs. With a noble expression on his young face, the boy version of the U.S. military’s most accomplished sniper accepts his lot in life to become a sheepdog—a protector—and in turn, saddles himself with a grave responsibility. Decades later, high above on the rooftops of Fallujah and Ramada hot zones, Kyle rested his rifle on a steady base and peered through his scope for insurgent targets. He was credited with 160 confirmed kills over four tours of duty, an unprecedented record. Played by Bradley Cooper, Kyle’s status becomes mythic, shifting from a cowboy to a patriot, and in time earning the nickname “The Legend” among his fellow troops. And his representation onscreen is just as exalting, since Eastwood has foregone the less dignified episodes of his subject’s real life in favor of a romanticized portrait. He’s humble and heroic, comparable to a modern-day Sergeant York.

The film begins with Kyle sniping during the war and then flashes back to his childhood, where his father embeds life lessons about honor and rifle handling. As Kyle matures, he turns into a rootin’-tootin’, beer guzzlin’, chaw spittin’, rodeo ridin’ Texan, but he quickly sets his cowboy aspirations aside after watching 9/11 footage on CNN. He enlists, trains to be a SEAL at 30, and gradually becomes a highly praised sniper. Meanwhile, Kyle meets Taya (Sienna Miller) and falls in love. They marry, and she’s pregnant by the time he begins a tour. Intercutting between Kyle’s experience on the battlefield and Taya at home alone, worrying, Eastwood creates a connection between the two and therein underlines how those removed from the conflict can easily criticize it. She remains in support of her husband, of course, but when he returns home between tours, she can see its toll on him, even if he refuses to acknowledge it. He remains calm and dignified, perhaps for Taya’s sake, though the effects of Post Traumatic Stress Disorder have already begun to set in.

In a subplot concocted for the film, Kyle and his fellow SEALs face off against a pair of merciless al Qaeda, a top man called “The Butcher” (Mido Hamada), and his sniper-protector, Mustafa (Sammy Sheik), a former Olympic sharpshooter. Both al Qaeda characters are based on real people, but their direct opposition to Kyle has been arranged in service of the film’s modern cowboy mentality. Kyle’s very black-and-white worldview sees only good (America) and evil (al Qaeda), and so the film uses Mustafa as Kyle’s villainous archnemesis. Eastwood and Hall use Mustafa to explain why Kyle keeps going back for additional tours, to finally get the guy who sniped so many of his SEAL comrades. Eastwood, whose long tradition of classical and revisionist Westerns remains an impressive contribution to cinema, could not avoid turning American Sniper into something akin to an old-fashioned cowboy film. Kyle’s need to get the bad guy is much more readily consumable than a complex, irresolvable discussion of how PTSD can actually result in a form of addiction for the thrills of wartime battle (thematically explored in The Hurt Locker).

Glossing over Kyle’s final return to the U.S. and his minor celebrity status with several books and appearances on talk shows and reality TV, the screen story ends after a sudden prelude to Kyle’s death—the screen fades to black and presents his ultimate fate in white titles. The final images of the film are sobering photos and video from Chris Kyle’s actual memorial service at the Cowboys Stadium in Arlington, Texas, on February 11, 2013, and from his burial the next day. Eastwood’s choice not to depict or attempt to explain Kyle’s death retains his place in reverence, but viewers not already versed in the subject’s life story will walk away with a sense that everything ended rather bluntly, and therefore this biopic feels incomplete. What happened to the man who killed Kyle, and why did he do it? Answering those questions may have led the film into too serious a discussion of PTSD, and that’s not what American Sniper wants to be. It’s much more interested in and effective as a two-dimensional tale of American heroes.

In addition to saving countless lives through his sharp-shooting as a Navy SEAL, in reality, Kyle made several curious claims (as noted in recent articles in Time and The Village Voice) to boost his legend, all of which blemish his otherwise pristine Golden Boy status. One such story, which officials later denied ever happened, involved Kyle getting carjacked; he supposedly shot the two perpetrators and the police let him off because he was “The Legend”. Another of Kyle’s stories claimed that Blackwater hired him to take out looters at the Superdome during Hurricane Katrina. And he told yet another story concerning former Minnesota governor Jesse Ventura, resulting in a defamation lawsuit that was lost by Kyle’s legal team. Jason Hall’s script ignores these and other less glorifiable points in Kyle’s life, leaving American Sniper more a carefully maneuvered reorganization and sometimes fabrication of the facts than a well-rounded biopic. It’s all in service of a heroic war film that addresses larger issues, such as PTSD, from a safe distance. This is not to disparage Chris Kyle, mind you; but a film that acknowledges how our heroes are sometimes deeply flawed human beings is more convincing and admirable to this critic than one that refuses to address a particular hero’s very human failings.

Of the performances, it can only be said that Cooper and Miller pour their hearts out onscreen. Miller gives her best turn yet as Kyle’s concerned wife, who’s forced to endure no end of worry and fear at home while her husband is “in country.” Cooper transforms into a singular presence, having gained impressive muscle mass for the role and adopted a quiet, honorable sensibility, not unlike Gary Cooper in Howard Hawks’ film Sergeant York. Much of what makes this onscreen Kyle so sympathetic is what Bradley Cooper shows us through his vulnerable body language and eyes. He’s putting on a hardened exterior and suppressing his fear and trauma beneath the surface, and we see evidence of this in Cooper’s layered expressions. It’s a complicated, outstanding performance in a film that’s less interested in the psychological effects of war than the statistical outcome of Kyle’s kill sheet. Indeed, with his frequent collaborator Tom Stern serving as cinematographer, Eastwood amps up the violence so it’s exciting like an action film, yet gritty and thus more realistic, while the score (credited to several composers) of mostly tones and tempos serves to create a “thrill ride” type of experience.

With his second film of 2014 after Jersey Boys, the 84-year-old Eastwood takes the easy way out with American Sniper, delivering a film that is both serviceable and respectful, yet would prefer to avoid any uncomfortable truths about its subject matter. The film is less about reality than creating a romantic hero—the equivalent of the mythic gunslinger. In that sense, it’s a shrewdly constructed film that some might call “classical”. But our understanding of classicism correlates to the earliest established storytelling, which was driven by emotion and mythos, and known not for its representation of reality. This film of Chris Kyle’s story is about mythmaking, not authenticity. And while that approach is not by nature condemnable, the film is somewhat suspect because it’s shot and presented in a realistic way. For reality, look elsewhere. Eastwood and Hall construct a very cinematic, romantic tale that leaves little to question; though reality, as always, is far more intricate and certainly not as black-and-white. As the saying goes, “When the legend becomes fact, print the legend.”