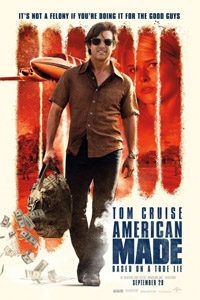 American Made walks a fine line between glorifying the criminal behavior it depicts and condemning it, suggesting college fratboys will overlook the film’s ultimate lesson that “crime doesn’t pay” just as they did after Scarface (1983) or The Wolf of Wall Street (2013). Indeed, screenwriter Gary Spinelli’s approach owes much to Martin Scorsese’s cocaine-fuelled whirlwind Goodfellas (1990) by capturing the rush and undeniable draw of a criminal lifestyle; however, the screen story, though moralizing, seems inspired more by the breezy energy of those criminal highs than third act reprovals. Director Doug Liman reteams with the ever-charming Tom Cruise, playing a commercial pilot who juggles a CIA surveillance gig, smuggles cocaine from Colombia for the Medellín Cartel, and runs guns for the Contras in their attempt to overtake Nicaragua. He reaps the benefits with a flashy house, a life that is anything but dull, and more loose cash than he can launder. Even so, through the film’s zippy construction, the viewer gets the impression that the real-life story was much more sordid and unbelievable than the one provided here.

The film opens with a brief montage of seventies pop-culture icons and newsreel footage, preparing the audiences for a nostalgia trip—a dull device that says, This was the ’70s. Let’s go there now! But then the film leaps to the mid-1980s, where Barry Seal (Cruise) records himself on videocassette, serving as the story’s narrator, while also testing the structural integrity of the Fourth Wall. On a time-stamped video, the worn-looking Barry recalls his early days as a pilot for TWA. Once again, we’re transported back to 1978, when Seal breaks the monotony of commercial flights by faking turbulence to wake sleeping passengers or smuggling Cuban cigars into North America for a hefty payoff. The period-jumping structure of American Made never quite settles, but we become used to its rhythms within the first ten minutes or so, after Seal’s low-level dealings catch the eye of a CIA operative calling himself Schafer (Domhnall Gleeson).

Ever a smarmy grin on his face, Schafer offers Seal an opportunity to fly into Central America and take surveillance photos of communist groups. Although the daredevil flying alleviates Seal’s boredom, he needs money to provide for his family. He soon learns that the drug cartels need transportation for their product into America, and without batting an eye, Seal takes the job. Before long, he’s shaking hands with Pablo Escobar in Columbia and dropping untold amounts of narcotics into Louisiana, while the CIA looks the other way as long as he continues taking photographs. At home on his newly acquired 2,000 acres in Arkansas, Seal adorns his wife Lucy (Sarah Wright) with a lifestyle of excess. But Lucy has no interest in asking questions or worrying about what happens if Barry gets caught; more than once, she voices her primary motivation: “You need to provide for this family!” To be sure, neither Barry or his wife have in-depth characterizations, nor do any of the supporting characters—most of which amount to subplot devices. For example, there’s Lucy’s scuzzy, always-shirtless brother, played by Caleb Landry Jones, who enters at the height of Seal’s success as the wrench tossed into the proceedings.

Behind a pair of virtually omnipresent aviator shades, Cruise looks like an older Maverick from Top Gun (1986), playing Barry with a nervous kind of confidence. His cocksure manner keeps him alive, while at the same time, he remains incredulous about surviving this long. There’s a sort of exhausted bewilderment to Cruise’s performance that recalls what he and Liman accomplished on their last collaboration, Edge of Tomorrow, their underrated sci-fi thriller from 2014. The real-life Barry Seal may have been involved in a lot more (or a lot less, if official reports are to be believed), but the events in American Made feel packed into the two-hour runtime. What’s more, Cruise makes every encounter seem more substantive than the screenplay allows. And while the voiceover device feels contrived at first, it’s eventually given weight in the fatalistic last scenes.

The film’s slapdash sensibility feels as though Liman and his cinematographer César Charlone (City of God, 2002; The Constant Gardener, 2005) shot enough footage for ten films, leaving cutter Andrew Mondshein to bring together everything in the editing bay. Charlone’s wildly inconsistent visuals present some scenes in a sepia-toned style reminiscent of the era’s polaroids; other shots attempt a pseudo-realistic handheld approach; others still shift between grainy video, idyllic Americana, and banal office interiors. Also added into the mix, appearances by various historical figures place Seal in a formative time in America’s history: a young George W. Bush; Oliver North, who conceived the Iran-Contra scandal; CIA-cohort-cum-Panamanian dictator Manuel Noriega; and even a nod to Bill Clinton. If nothing else, American Made earns its title, despite the adjective “American” being entirely overused in Hollywood films (American Made opened just weeks after American Assassin).

The messy assemblage, though divertingly erratic, has clearly left some of the secondary cast to seem as though their roles were cut down in post-production. It’s difficult to imagine that the local sheriff and his wife, played by such significant performers as Jesse Plemons and Lola Kirke respectively, were originally written with just the two or three scenes in which they appear. Wright has been dropped into a role clearly modeled after Margot Robbie’s turn in The Wolf of Wall Street, but with none of the dimension. Much of the film lacks dimension, in fact. Focused more on Seal’s exploits than the political implications of them, American Made‘s would-be blow to underhanded Reagan-era dealings remains ornamented with a high-energy bravado. The haphazard momentum of the film mirrors that of Seal, who leaps from one thing to the next, trying to balance and stay on the good side of his otherwise volatile series of employers. Cruise’s presence and charisma make everything seem more cohesive than it is, no matter how uneven his Southern accent may prove. Regardless of its exciting story and sharp ending, the film contains almost no lasting consequence and feels more like an adventure than the story of a real-world scandal, rather troublingly so.