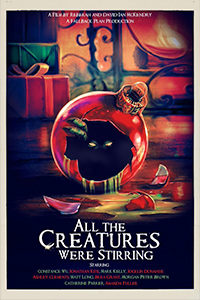 Something about Christmastime summons horror filmmakers to offset the season’s forced atmosphere of joy and giving with bloody violence and sardonic humor. Although the first holiday-themed horror movie, Bob Clark’s Black Christmas from 1974, offered little irony in its bleak setup about a crazed lover killing his way through a sorority, later titles from the Santa-slasher Silent Night, Deadly Night (1984) to the recent creature feature Krampus (2015) have winkingly delivered equal measures of comedy and terror in a Christmas setting. The contrast is irresistible. All the Creatures Were Stirring follows suit in its blend of horror and comedy during the holidays with an anthology structure, delivering five tales of Christmas jeer. In typical horror anthology fashion, some stories are better than others. However, even the superior episodes in this achingly low-budget production are poorly assembled and look cheap; they’re notable only for their conceptual novelty, not their execution.

The husband-and-wife team of Rebecca and David Ian McKendry wrote and directed All the Creatures Were Stirring. He’s made some horror shorts, written for Fangoria, and authored a book about Clive Barker’s Hellraiser series. She has a Ph.D. in horror studies. Both host horror-themed shows on the Blumhouse Podcasting Network. Given these credits, one enters their movie with an optimism that the couple will mine their apparent knowledge and fandom of the genre to create an inspired horror anthology. Alas, from the first few seconds on, it’s evident their production is unprofessional, but not in the charming way of the many independent horror titles that inspired them. Its problems begin with the script and run all through the acting, direction, and technical departments.

Essential to the effectiveness of any horror anthology is the framing device, and here it’s unwieldy and ill-conceived. The movie begins with an awkward meeting on Christmas Eve. Not-so-close friends Max (Graham Skipper) and Jenna (Ashley Clements) fight the holiday blues by meeting at a local community microtheater to take in “All the Creatures Were Stirring,” a Christmas-themed stage production of five holiday horror plays performed by three pantomiming actors. As the stage performance begins, the proceedings shift into short film mode, transitioning from the plays to their cinematic realization. The movie’s only laughs often come from the transition back to the stage, where the performers act out a small-scale version of the short story. Meanwhile, it’s uncertain whether Max and Jenna are supposed to have romantic chemistry, which is another way of saying they do not. But their confused and mocking expressions over the stage production mirror our own reaction to the movie.

Each taking their name from lines in the Clement Clarke Moore poem “Twas the Night Before Christmas,” the segments begin with “The Stockings Were Hung,” about an office gift exchange that turns into something resembling Saw. “Dash Away All,” the best of the bunch, has a nifty premise about a guy locked out of his car, and the two young women who seemingly offer to help—it has the creepiest and most effective twist. Next, “Arose Such a Clatter” considers what happens when Santa’s reindeer Blitzen gets revenge on an irresponsible driver. Then “All Through the House” takes on Dickens’ A Christmas Carol, except with J-horror ghosts and a cocaine-sniffing Scrooge. The last, “In a Twinkling,” begins with a werewolf setup and ends with an alien abduction, and also features the charming Constance Wu (Crazy Rich Asians), representing the movie’s only compelling performance. Not one of the stories is without holes in the plot; gaps in logic; inconsistent or underdeveloped characters; unexplained behaviors; or at least a moment or two of downright confusion in the viewer.

All the Creatures Were Stirring has the look of a student film project that just barely received a passing grade. At 80 minutes, it feels long and cumbersome, as though the editing department gave up after assembling the rough cut. There’s no rhythm, intensity, or polish to the visuals, regardless of the McKendry’s occasional use of De Palmaisms—such as split-diopter lenses and split-screens. And the cartoonish looking CGI is only slightly less embarrassing than the rigid stuffed-animal deer prop used as roadkill in “Arose Such a Clatter.” Although some of the situations are relatable, none of the segments have compelling characters, and the dialogue sounds unnatural. Oddly enough, most of the acting is like amateur theater, though many in the cast have demonstrated their talent in other, better low-budget genre films, suggesting the fault lies in the script.

Sadly, the best thing about All the Creatures Were Stirring is the poster. A painted image in the style of 1980s promotional artwork shows a Christmas tree bauble cracked open like an egg, and a green discharge oozing out onto the floor. From inside, monstrous little claws reach outward from a pair of glowing eyes. The effective image, evoking something between Gremlins (1984) and Critters (1986), never comes to life in the movie—a significant miss on the part of the filmmakers. Beyond the effectiveness of the marketing and the generally promising notion of Christmas-themed horror anthology, the McKendrys deliver an unpolished movie that fails, badly, in its desperate attempts to become a new holiday cult classic.