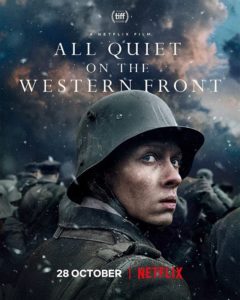 In the opening shots of All Quiet on the Western Front, director Edward Berger explores a vast forest and settles on a mother fox sleeping with her kits in a den. The kits wake and suckle for milk in a quiet, undisturbed moment. Foxes might be seen as deadly predators for chickens in a coop or the farmers who raise them. But for a huntsman who presides over a group of riders and hounds, the fox is prey, fleeing terrified through the woods. The point of this image, I suppose, is to associate foxes with German soldiers during The Great War. Some of the individual soldiers are neither innately good nor bad; they are simply young men caught in the circumstances of war—like the foxes, it depends on your perspective. Based on Erich Maria Remarque’s novel about World War I, serialized in Germany in 1928, the film mourns the loss of humanity in war. Although its “war is hell” argument is familiar, and it’s not the first time Remarque’s book has been adapted to the screen, the production is often so gorgeously mounted and performed that the familiar quality of its themes and situations remains of minor concern.

Berger’s production marks the first time ​​All Quiet on the Western Front has been adapted into its original language. The earlier screen versions were both in English. Lewis Milestone directed an adaptation in 1930 and earned Oscars for Best Picture and Outstanding Production. However, the Nazi party rallied against the production in Germany, interpreting the film’s humanist message as anti-German. A few years later, the distributors at Universal re-released the film as a pacifist statement on the ballooning World War II. Perhaps as a reaction to the conflict in Vietnam, Delbert Mann directed a made-for-TV adaptation in 1979, starring Richard Thomas. But both versions used English-speaking actors to convey the book’s universal theme—that nationalism works in opposition to the individual, and that the madness of war remains a most inhuman act. Unfortunately, Berger’s anti-war film also makes the mistake of rendering onscreen battle as horrific but also simultaneously beautiful and thrilling, occasionally confusing the message.

Indeed, Berger and cinematographer James Friend borrow images from another recent World War I film, Sam Mendes’ 1917 (2019), an immersive experience whose virtuosic camerawork distracts from all else. Berger’s visual treatment isn’t quite as showy, but it’s no less self-conscious and intentional. The color-graded images have a blue-gray hue, capturing the muddy and lifeless trench warfare in all its nightmarish reality, apart from the bright reds of blood-filled puddles on the battlefield. At night, fires create an orange glow that turns soldiers into stunning silhouettes. Berger and editor Sven Budelmann often cut to trees or forest panoramas between war sequences—Malickian shots straight out of The Thin Red Line (1998) that look up into the canopy, putting the conflict into perspective next to the overwhelming profundity of Nature. The chaotic battle scenes have the equal measures of realism and visual bravado found in Stanley Kubrick’s Paths of Glory (1958) and Steven Spielberg’s Saving Private Ryan (1997), conveying the “no man’s land” as a place drained of life, home to unthinkable and meaningless death, yet captured with such a visual luster that every shot deserves admiration. 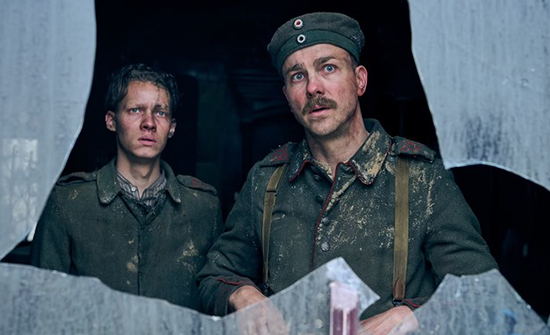 For much of the two-and-a-half-hour runtime, the story follows Paul Bäumer (Felix Kammerer), a well-educated young man who enlists against his father’s wishes to join the war effort with his three friends. The year is 1917, and their optimism to fight for “Kaiser, God, and the Fatherland” quickly turns into terror after their first experience in battle, when one of them dies. Having narrowly survived a “creeping barrage,” Paul is ordered to collect the names of fallen soldiers; he breaks their circular metal dog tags in half, leaving one side around the soldier’s neck and storing the other in a leather bag. In moments like this, the film has the episodic structure of something like Come and See (1985), which gradually exposes its innocent protagonist to one trauma after another until he’s little more than a cracked and empty shell. Kammerer’s performance is harrowing and committed, particularly in a scene where he breaks down over a Frenchman he stabs and immediately tries to save. But by the final battle scene, Paul has become an automaton, rushing into the fray with an almost primal capacity to kill without hesitation.

Before Berger introduces Paul, there’s a masterful sequence involving a young soldier named Heinrich (Jakob Schmidt) who dies in battle. Later, his uniform is collected, washed, patched, and redistributed to Paul, while a commanding officer hides the fact that the uniform once belonged to a dead soldier. All Quiet on the Western Front characterizes the dogged routine of war that cycles through human collateral with little concern for the value of individual life beyond its value as “a pair of boots with a rifle.” Unfortunately, composer Volker Bertelmann captures this theme in his dry, electric three-note guitar riff (bwong Bwong BWONG) that interrupts and juxtaposes most scenes. Bertelmann’s music is less an accompaniment to scenes than a reminder that the stark rhythm of war continues, devoid of emotion. Although the film deploys a few piano notes courtesy of Bach late in the proceedings, during a predictably tragic return to a French farm, Bertelmann’s guitar riff and occasional thumping drums feel like jarring interruptions that distract from the film’s otherwise immersive effect.

Berger’s German-language production, which he adapted alongside Lesley Paterson and Ian Stokell, deviates from the source material in a few notable ways. This version features scenes not in the book involving Matthias Erzberger (Daniel Brühl), a real-life official who helps negotiate an armistice to save German lives; though, one wonders where he would be if Germany hadn’t been losing the war. By contrast, career soldier General Friedrichs (Devid Striesow), whose role in the war amounts to giving orders from a stately French chateau, laments the surrender. While spending his nights indulging in fine cuisine and wine, he weighs his legacy over human lives—soldiers who, a few miles away, starve and fight by his orders. Eventually, Friedrichs attempts to get one last victory on his record and sends his soldiers into battle with just a few minutes remaining until the war has officially ended. As one soldier observes to Paul, “Man is a beast,” and he acts toward power as a dog does toward a bone—he lunges for it. Friedrichs represents the type of power-mad figure who schemes and declares war, ignoring the human cost in favor of abstract and selfish notions such as borders or personal legacy.

Produced by Netflix and submitted as Germany’s contender in the Oscar competition for Best International Feature, All Quiet on the Western Front manages to convey the horrors of war and the subjectivity of Paul throughout. Although Paul doesn’t have much depth as a character, Kammerer makes him into more than a hollow cipher (my issue with the characters in 1917), submerging the viewer into his perspective to witness the procession of upsetting and scarring events through his eyes. The technique is a familiar one in the antiwar movie genre, but it’s easy to admire the visually stunning compositions Berger has created, even if he doesn’t offer a new take. So, the question remains: Why this story, and why now? Perhaps as increasingly nationalistic attitudes arise around the world, the film stands as a warning to remember that humanity is more than just groups of people defined by borders or sociopolitical labels. If people forget that and continue to think along those terms, the cost could be dire, as history has proven time and again. Germans understand this more than most.