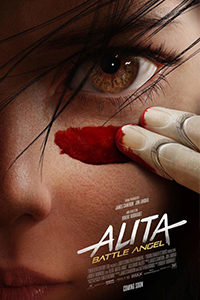 Sitting down to write a positive review of Alita: Battle Angel, I cannot help but feel on the defensive. The critical community has panned this big-screen adaptation of Yukito Kishiro’s manga series, and the few to respond positively have been lukewarm in their praise. Industry commentators and box-office analysts forecast major financial losses for distributor 20th Century Fox’s reportedly $200 million production, signaling that audiences aren’t altogether interested. Whatever such trends may say about Hollywood’s rampant, often misguided desire to create a long-running franchise similar to Harry Potter or the Marvel Cinematic Universe, these factors have little bearing on the film itself, which I enjoyed and at this point feel a need to defend. What I enjoyed about the film is the pageant of state-of-the-art CGI and imaginative world-building—it’s something to dazzle the eyes rather than engage the critical mind, and sometimes that sort of experience is worthwhile. However simplistic the characters and often banal the dialogue may be, Alita: Battle Angel offers an escapist science-fiction showpiece that may not be high art, but it nonetheless offers an important component of the moviegoing experience: spectacle.

Working from a long-gestating script and production planning arranged by James Cameron, director Robert Rodriguez immerses the viewer in Alita: Battle Angel’s elaborately constructed world, which its many characters explain in never-ending exposition. They inhabit Iron City, the twenty-sixth-century post-utopian society still reeling from the aftereffects of a 300-year-old war with Martian colonists. Sleek, fantastical technology is a thing of the distant past; everything remaining is salvaged, clunky, and dated. It’s like Star Wars in that way, where we see evidence of a once-great world now in a state of decay. Floating above the decrepit Iron City is an elitist paradise called Zalem, and the disparity between the cities above and below represents a class system not dissimilar from the one portrayed in Elysium (2013). And like that film, the derelict citizens on the surface use cybernetic parts to augment what remains of their organic body. Virtually everyone on the bustling streets seems to have a robot appendage; some people are nothing more than a few organs protected by a mechanized exoskeleton. 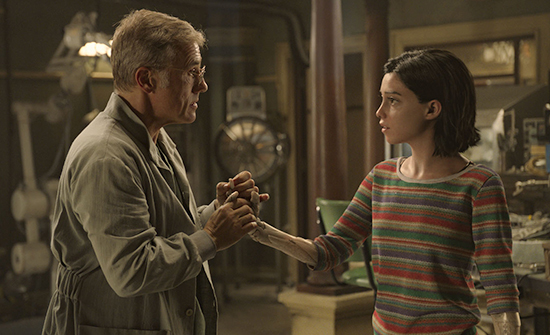 Our hero is Alita (Rosa Salazar), a cyborg reassembled from scraps by Dr. Dyson Ido (Christoph Waltz), her ostensible father. “You’re alive,” Ido says when he finds her parts in a scrap yard—a loaded statement explored, albeit heavy-handedly, in the script by Cameron and Laeta Kalogridis (Shutter Island). Once named Alita and revived, she doesn’t know who she is.  Her brain is human, but everything else is composed of elegant cyborg technology, and she has only vague flashes of her previous life from three centuries earlier. To the viewer, she looks odd at first, to the extent that we could not be blamed for reacting strongly against her appearance in promotional material. But to see Alita in action is something else. She has large eyes like an anime character and, since she’s surround by human beings, that look threatens to place her in the Uncanny Valley. But the motion-capture and CGI animation used to create Alita is convincing, and after about five or ten minutes, her initially off-putting presence becomes familiar, even endearingly so. In any case, as the amnesiac Alita explores Iron City, so do we, much to our fascination.

Alita quickly befriends Hugo (Keean Johnson), her love interest and tour guide to the busy metropolis—an elaborate, dangerous place filled with merciless opportunists and killers. “It’s a hard world down here… You gotta have a dream,” explains Hugo, who hopes to someday escape to Zalem. It’s moments like this when Cameron’s penchant for corny, exposition-heavy dialogue reveals itself. Elegant exchanges and complex themes have never been Cameron’s strength. He’s better at delivering intricately constructed visual spaces in which the simple emotions of his heroes can flourish. We ignore the familiar Dances with Wolves plotline and silly devices like “Unobtanium” in Avatar (2009) because they’re presented within a beautifully detailed alien world. We ignore his laughable dialogue—from the macho clichés of Aliens (1986) to lines like “I know now why you cry” in Terminator 2: Judgment Day (1991)—because they’re contained within a believable, immersive science-fiction mise-en-scène, backed by the filmmaker’s devotion to blending realistic technology with fantastical concepts. So when Alita telegraphs the film’s themes by asking “Who am I?” aloud, it’s hardly important next to the amazing appearance of Alita herself.

At any moment you could say to yourself, “This is absurd”—and you wouldn’t be wrong. It’s an outlandish, far-out world, arguably best suited for those attuned to the storytelling styles of anime: heavy on exposition, slight on character, basic dialogue, and imaginative visual concepts. Alita: Battle Angel should be consumed on those terms, by those rules. If not, the film threatens to lose us in its leaps from one plot element to the next within obvious story arcs. The milieu is pure anime: Alita learns of a bounty hunter subculture of “hunter-warriors” who stalk rogue cyborgs. Among them is the cocksure, mohawked Zapan (Ed Skrein), who’s none-too-pleased when Alita joins the inner circle of bounty hunters and proves capable of out-fighting them all. Rather than futuristic artillery or lasers—guns have been outlawed—combatants use a combination of martial arts, swordplay, and projectiles to fight. There’s also Motorball, Iron City’s local arena sport that bears some resemblance to the game played in Rollerball (1975), except the players look like Power Loaders and ride on automated roller-skates. The big Motorball showdown is a wowing sequence. The resident gangster named Vector (Mahershala Ali) operates the Motorball games and, for one reason or another, he wants Alita, so he sends the assassin named Grewishka (Jackie Earle Haley) after her. Above it all, a dreaded overseer named Nova (Edward Norton, barely seen) runs Zalem, controlling the fates of everyone in his view. 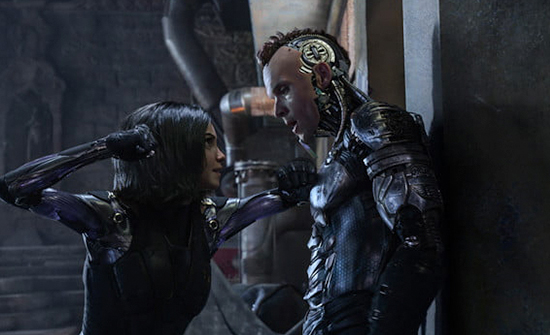 Rodriguez’s uneven track record for the creation of CGI worlds ranges from the marvelous (Sin City, 2005) to the embarrassing (the Spy Kids franchise). Fortunately, he received some insight from his producer Cameron, who, going back to 2000, planned to direct the film—but he’s since been busy planning several Avatar sequels. The outcome looks incredible, and every frame bursts with neon lights, crowds of cyborgs, and details impossible to consume in a single sitting. Alita: Battle Angel may be the unwanted stepchild of Metropolis (1927) and Blade Runner (1982) in its portrait of a cyberpunk city, but I was enthralled when following the characters around these intricately designed spaces, photographed with rich lighting by cinematographer Bill Pope. The fight scenes between Alita and her enemies or the sequences of Motorball have been so thrillingly composed so that, even at their most hectic, the action remains cohesive. Although many moviegoers often complain about CGI over practical effects, Rodriguez demonstrates that, when used to create a singular world, the limits of computer animation are vast. Note a brief underwater scene that looks better than all of last year’s Aquaman or, simply, Alita herself, a character who quickly becomes a tangible part of each scene despite her CGI-ness.

While I understand any viewer’s inability to look beyond the usual quality of Cameron’s hackneyed dialogue, Alita: Battle Angel contains a forward thrust to the narrative that engrossed this fan of anime, science-fiction, or tentpole-sized productions of this sort. The familiar story beats may be predictable, and the ending may anticipate a sequel that will never come, but the overall experience is a wonderful treat for the eyes, albeit with a number of caveats. Sure, the dialogue and characters have been considered in thin terms. And it’s a film that caters to fans of anime and massive science-fiction epics, while exploring the limits of CGI and motion-capture performances—qualities that for many viewers will ring hollow. Even so, I was never less than engaged and entertained on a purely aesthetic level and simple emotional level. That may not be enough for some. To be sure, I often expect great science-fiction to engage the mind and the raw senses. But as Cameron and Rodriguez have proved elsewhere on a number of occasions,  spectacle is a key component to cinematic escapism, and Alita: Battle Angel supplies such an escape.