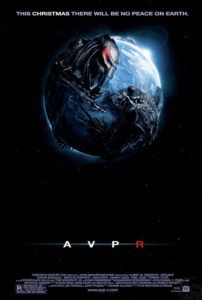 If there’s one good thing, just one, about Alien vs. Predator: Requiem, it’s that Paul W.S. Anderson (Resident Evil) has nothing to do with it. The writer-director of Alien vs. Predator didn’t write or direct this action-horror sequel. Meaning, his type of brainless video game moviemaking should be absent, right? Right? No such luck. Twentieth Century Fox found carbon copies, two of them, in the form of brothers Colin and Greg Strause, to direct. And then they released their movie conveniently on Christmas Day, so those of you burnt-out on holiday madness could relieve your tension by watching little children and pregnant women be slaughtered like cattle by alien beasties. Merry Christmas.

Shortened to AVP:R by the crack marketing staff at Fox, this sequel takes place immediately after the first ended, when, if you recall, the Predator ship just leaves the hero in Antarctica to freeze her buns off. Meanwhile, a part-Predator-part-Alien (dubbed “PredAlien” by the unimaginative filmmakers) pops out of the lone Predator survivor’s chest and screeches in amalgamated delight. When this sequel begins, the “PredAlien” causes the Predator spaceship to crash land in Gunnison, Colorado. Facehugger cargo spills in the crash; they get loose, find faces to hug, and, well, you know the rest.

Meanwhile, back on the Predator home planet, a lone hunter-alien is sent to clean up the mess. Called “Wolf” by the film’s crew, this Predator has to destroy all Alien evidence from the crash site. He disposes of the ship, bodies, and then hunts down Aliens born since the crash. Wolf also keeps his eyes out for the PredAlien leader, which displays higher reasoning skills and looks like an Alien with mandibles (as if Giger’s Alien design needed more cranial protrusions). You’d think Wolf would call for backup when he realizes he’s in over his big, dreadlocked head, after he sees Aliens taking orders from a PredAlien; but you know those Predators—a stubborn species.

I like that writer Shane Salerno kept it simple, sticking to a lone Predator we can follow, and even begin to project hero characteristics onto. In AVP, both species were abundant, random monsters that killed each other, and then the movie was over. I give the writer credit; at least he tries to formulate characters, even heroes, from an otherwise empty well of clichés and B-movie formulas. By no means does he succeed, but kudos for the effort, Mr. Salerno.

As for the human characters, they’re introduced and disposed of quickly, sometimes in the same scene. What should be empathetic set-ups end in meaningless-therefore-just-plain-mean deaths. Take the opening scenes, where a young boy and his father hunt deer in the woods. We see them for all of forty seconds before Aliens are shoved down their throats and then burst from their chests. And I won’t discuss in detail what happens in the maternity ward of Gunnison’s hospital, but baby death has never been such a casual subject in a movie.

Early on, we’re introduced to the Bad Boy, better known as the Loner, the Rebel, and the Ex-con with a heart of gold, named Dallas (Steven Pasquale, whose character’s name is probably an homage to Tom Skerritt’s character from Ridley Scott’s original, brilliant Alien feature). He wears a leather coat, just so we know how bad/cool he is. There’s also Kelly (Reiko Aylesworth), a mother returning home from Iraq to a daughter who forgot about her. And lest we forget Dallas’ teenage brother Ricky (Johnny Lewis), who’s headed down the same path as his big brother. Sheriff Morales (John Ortiz) struggles when—oh, who am I kidding? Ninety percent of these characters die and we couldn’t care less about them. When they die, it’s without remorse, and we feel wrong about that as an audience. We realize we should feel something, but because random alien violence takes precedence over character development, we don’t.

I mentioned B-Movie formulas before. How true. For those of you fortunate enough to have seen Planet Terror, you’ll see blatant commonalities between AVP:R and Robert Rodriguez’s movie. In both, a Bad Boy comes home and buddies up with a sheriff to fight slimy things in the night; they resort to machine-gun-wielding self-defense, kill lots of monsters, and escape on a helicopter. Rodriguez imbued humor into every hokey plot device, however, acknowledging yet embracing the fun of such bad filmic tropes. He even made us care about the little boy in Planet Terror, but kept it light enough so that we were laughingly shocked when the boy shot himself in the face. AVP:R takes itself too seriously to resort to irony, making it humorless and insensitive, in addition to being garbage.

If the directors, credited as The Brothers Strause, have ever seen Alien, Aliens, Alien 3, or Predator (the great-to-good movies in these now-conjoined franchises), there’s modest evidence of it in this sequel. Fear and horror are no longer factors, in what started out in 1979 as one of the scariest movies (still) yet made. This is a body-count movie where tallies reach lofty numbers by the literally explosive finale. It won’t surprise you or inspire an in-depth film conversation (even if there are a few half-handed Kurosawa references), but it might divert your thoughts for 80-some minutes.

Certainly more watchable than its predecessor, which is one of the stupidest movies I’ve ever seen, AVP:R manages to raise the franchise(s) from the Ninth Ring of Hell, to Limbo, where it’s destined to float like the pointless and forgotten movie it should be. There’s enough here to create a negligible survival plot, an anonymous Predator character to root for, and direction swept of all Paul W.S. Anderson-isms. Despite those positives, they are only in lieu of AVP, making it seem like Citizen Kane in comparison; without the contrast, it’s still transparent and silly and a waste of your money.