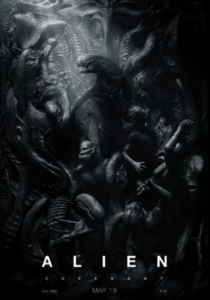 In H.G. Wells’ The War of the Worlds, Martian invaders attack and plan to overthrow Earth, until their onslaught is undone “by the humblest things”—common microbes to which humans have evolved immunities. Herein lies the problem with the human species colonizing another planet. No matter how much water or breathable air a habitable planet may have, it undoubtedly contains microbes that the human immune system is unequipped to fight. Any such mission would surely require protective suits to filter air and water, as well as countless years of biological research and testing before a flush colony could form. Based on what happens in Alien: Covenant, microbes are the least of your concerns as a colonist. Now intergalactic colonists must worry about their new planet containing a synthetic person with a god complex, a barrage of biological intruders bent on using your crew’s bodies as hosts, and the remnants of an ancient civilization that, as it turns out, created all life on Earth. Consider yourself warned.

Ridley Scott’s sequel to his 2011 letdown Prometheus, which was a pseudo-prequel to his 1979 breakthrough Alien, combines those two films in a way that proves effectively thrilling, albeit not as smart as it wants to be. Still, what Alien: Covenant lacks in cohesive intelligence or consistency within the series, it makes up for in compelling characters and raw, scary-as-hell situations. Written by John Logan and Dante Harper, the film borrows heavily from earlier entries, taking elements that worked and incorporating them here into a sequel that feels familiar, but it contains enough variations on the pattern to feel innovative. Although strains of Prometheus DNA saturate the film, the result has more in common with both the original and James Cameron’s follow-up, Aliens, including the long overdue use of the classic alien design by H.R. Giger.

Something goes wrong aboard the Covenant on the ship’s colonization mission to an ideal planet. The captain (James Franco, for some reason, seen only in a flashback) dies, leaving the nervy leader Oram (Billy Crudup) to take command of the vessel, its thousands of colonists and colonist embryos in hypersleep, and the dozen members of the awakened maintenance crew. Among those awake is the captain’s widow, the third-in-command Daniels (Katherine Waterston), a strong female hero and an evident nod to Sigourney Weaver’s Ellen Ripley. Also among the crew is the resident synthetic, Walter (Michael Fassbender), a more advanced and unemotional version of the synth named David, which Fassbender played in Prometheus. With seven more years to go on their space flight, Oram finds himself drawn to a nearby planet from which, curiously, they receive a human distress signal. Even better, the planet seems like a perfect match for colonization. 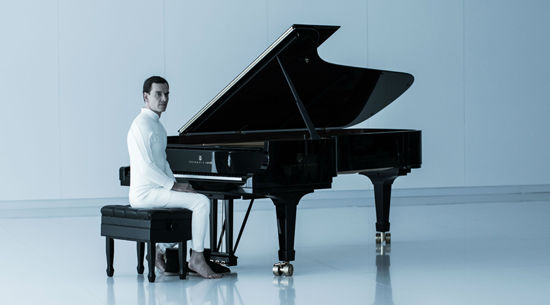 When a landing party explores the planet, they quickly find the source of the signal—the Engineer ship piloted by Elizabeth Shaw (Noomi Rapace) and David at the end of Prometheus, except no one’s aboard. The party also finds themselves plagued by a horrifying spore that infects two members, eventually creating a fleshy xenomorph-like thing that attacks and kills other crewmembers. Fortunately, David arrives to save the day. David already appeared in the prologue opposite Peter Weyland (Guy Pearce), the bajillionaire whose company funded these maligned missions. From this early scene and the previous film, it’s apparent David has… issues. What those issues are, and how they unfold in Alien: Covenant given the presence of his “brother” Walter, remains the most psychologically fascinating, if somewhat unclearly motivated aspects of this film.

Logan and Harper carry over a theme from Prometheus that David has chosen to identify with Peter O’Toole’s performance as T.E. Lawrence in David Lean’s Lawrence of Arabia, easily one of the most complex characters in cinema history. The enduring theme of that 1957 epic asks, quite literally, “Who are you?”—it’s the prevailing, unanswered question posed to Lawrence several times in the film. That same question remains for David, who, like Lawrence, has extraordinary power given to him but no guidelines on how to use it. Both David and Lawrence also question and usurp their masters; however, David’s revolt is far more genocidal and maniacal. What’s more, have viewers of Alien: Covenant ever done a close reading of Lawrence of Arabia? Will they “get” that when David quotes Percy Bysshe Shelley, he’s actually quoting Lean’s film? Will they know that David humming “The Man Who Broke the Bank at Monte Carlo” and listening to it echo throughout his lair is yet another reference? Does it matter?

When David and Walter meet, incestual hints develop between them, largely on David’s part since Walter has not been programmed with emotions. Consider the eroticism propelling a flawlessly acted and blocked sequence where David teaches Walter to play the flute. A sexual innuendo lies beneath the scene, but there’s also an imminent threat of danger (David is, after all, completely bonkers). Already Alien: Covenant has shocked and made us squirm with frenzied, visceral scenes of the crew facing horrible monsters, including a superb sequence that unfolds from inside the landing ship into a field of tall grasses. But somehow, the revelations about David and what he’s been up to the last decade remain even more unsettling, even if it’s unclear what he hopes to accomplish and why. Fassbender wonderfully captures the twinkle of deranged logic pervading David’s mind, and the computer technology used to capture his dual performance is seamless. 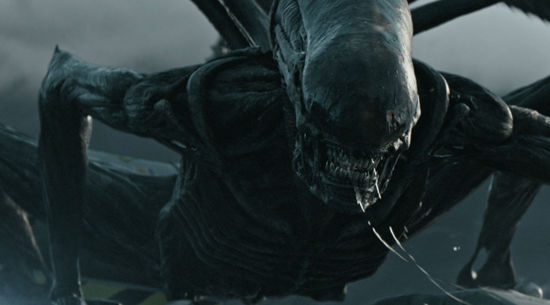 Devotees to the Alien franchise may balk at Alien: Covenant‘s inconsistent timeline for alien life. Following a brief facehugger impregnation, a human host has no more than a few seconds of consciousness before the alien’s birth. Covered in bloody afterbirth and barely able to stand on wobbly legs, it’s nonetheless ready to kill. The miniature alien enters a growth cycle that feels rushed to get the full-sized creature onto the screen. In both Alien and Alien 3, the xenomorph takes hours, perhaps even days to reach adulthood, and the stages of its development are signaled by slimy globs of shed skin lying about to build suspense. The alien in this film takes minutes to reach adulthood as if to accommodate the contemporary viewer’s overstimulated, ADD-rattled brain. When it finally appears in the form Giger designed, Scott makes an unfortunate choice to render the creature in full, unobstructed view. Scott withholds nothing, therein removing the mystery that accompanied the original’s fear of the unknown. Moreover, the alien is almost exclusively shown in CGI, complete with a distractingly lowbrow use of alien-vision POV shots that don’t seem to fit with the rest of the film, stylistically.

Such minor, yet no less annoying incongruities throughout the franchise have been present since Alien: Resurrection introduced a silly looking alien-human thing and aliens that roared instead of hissed. To be sure, the mythology of the Alien franchise has been scattershot at best, leaving everything after Aliens to feel off somehow. That’s 31 years of feeling off. But then, Alien: Covenant marks the third or fourth best film in the franchise. It builds at a measured pace in the opening, recalling the first film. Covenant‘s crew behaves like blue-collar workers rather than the soul-searching bores and scientists in Prometheus. The cast—which also includes Danny McBride, Carmen Ejogo, Amy Seimetz, and Demián Bichir—lends the film a wide array of personalities and types to keep the proceedings varied. And, of course, Scott has delivered a gorgeous looking film. Production designer Chris Seagers and cinematographer Dariusz Wolski provide a science-fiction lover’s dream, though Scott, ever the visualist, does not let the look dominate the storytelling as he did with this film’s predecessor.

Scott has openly admitted that Prometheus was a divisive misstep, and he goes a long way to atone with Alien: Covenant. The result stumbles in a few, negligible ways, leaving some questions about David’s motivations and some frustration with an out-of-place choice like alien-vision. Elsewhere, there are more frustrating details to ponder, such as the inconsistent alien growth cycle. But, despite its use of CGI aliens, some campy special FX in the finale-after-the-finale, and an alien growth timeline catering to impatient audiences, Alien: Covenant succeeds on visceral terms. It’s the first Alien film in a long time to frighten its audience and render the iconic monster scary again. Scott relies on elemental cinematic drives like fear, character, and emotion to guide the film, while the psychological aspects are sure to inspire debate. Capped by a haunting final scene, the film works on nearly every level it’s supposed to, providing a refreshing and entertaining entry into the franchise.