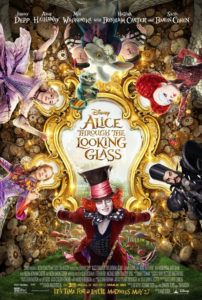 Only in name does Alice Through the Looking Glass resemble the source material Through the Looking-Glass, Lewis Carroll’s second collection of stories about Alice, a Victorian-era child who goes on adventures in a psychedelic Wonderland. A sequel to Tim Burton’s cluttered and commercial Alice in Wonderland from 2010, the Walt Disney Pictures release replicates the CGI realm that earned over a billion dollars at the worldwide box-office. Most of the original cast returns for a story that has more in common with The Terminator or Back to the Future than anything from Carroll’s body of work. Burton himself even resisted directing this obvious cash grab, not that his lately indelicate touch could have improved the vacuous screenplay by Linda Woolverton.

Director James Bobin (The Muppets, Muppets Most Wanted) takes over helming duties for this assault on the senses, a loud and busy insult to viewers everywhere. Rather than embrace the world-turned-upside-down logic of Carroll’s stories, Woolverton employs familiar narrative devices that are anything but unconventional. The story opens with a prologue that seems like it should be a dream sequence, wherein twentysomething Alice (Mia Wasikowska) captains a ship and evades pirates on the high seas. However impossible this may seem—especially since the end of Alice in Wonderland left the heroine wanting to become a businesswoman—it is, in fact, reality. This is just one of many missed opportunities for the movie to play with Carroll’s frequent theme of questioning whether the story is reality or a dream.

Before long, Alice returns to London from an exploratory trip to China, only to find her financial interests have been put into jeopardy by her former fiancé, Hamish (Leo Bill). Alice escapes the cruel World of Men and returns to Wonderland, where she learns the ginger-haired, gap-toothed Mad Hatter (Johnny Depp, who randomly alternates between a shit-in-his-mouth lisp and a Scottish accent) has fallen into a depression. His unprovoked state leaves him near catatonic—upset because his family, the Hatters, are dead, but he believes Alice can somehow rescue them. Why did he suddenly come to this conclusion? Because the screenplay needed him to. And so, Alice gets some advice from the White Queen (Anne Hathaway, who brings new meaning to the term “overacting”) to seek out Time himself. Time is played by Sacha Baron Cohen, who’s doing a very good impersonation of an absurdist Werner Herzog, and uses more time-related puns than the screenplay for In Time. At any rate, Alice must obtain a device from Time that will allow her to travel into the past and discover what happened to the Mad Hatter’s family.

Hollywood’s obsession with time-travel scenarios allows Alice Through the Looking Glass to once again explore the origins of these otherwise classic characters. But I ask you, do we need Tweedle Dee and Tweedle Dum as children, or the Cheshire Cat as a kitten? Do we need to see the Mad Hatter as an adolescent? Instead of clarifying details about the Mad Hatter’s past, the movie raises more questions. For example, why does the rest of the Hatter family look like normal Scottish folk, while, even as a youngling, the Mad Hatter looks as though he was painted by 11-year-old girls at a slumber party? After all, we’re supposed to believe the Mad Hatter went mad because of what the Red Queen (Helena Bonham Carter) did to him; so why does he look like a clown rapist even before he’s subjected to such tragedies? (Also, Depp appears to have filled out in recent years, meaning he looks like the rest of us now, which makes those purple shadows on Hatter’s cheeks look distractingly misplaced on the actor’s now-round face.)

Typical for such time-travel yarns, Alice receives familiar warnings that no one must see a younger version of themselves in the past, less the universe will end. But when that eventually happens in the third act, the result doesn’t destroy the universe as so many have warned it would; rather, the consequence is merely a layer of brown rust over everything, which doesn’t seem so bad. Indeed, nothing about Alice Through the Looking Glass’ story feels inspired or particularly imaginative. Never does the viewer feel as though we’ve entered Carroll’s world of the absurd and surreal, despite weird backdrops and characters. When the Red Queen snaps off her veggie-guard’s carrot nose and eats it, the throwaway moment doesn’t walk the line between funny and horrifying, as most of Carroll’s work does. It just feels uninspired.

To be sure, this movie is the cinematic equivalent to shaking keys in a baby’s face. Some might call its erratic art direction “imaginative” or “lush”, but Carroll’s world had an undeniable visual consistency, even in its most unreasoned moments. Under Bobin, we cannot help but notice the movie’s odd and inconsistent visual touches, all painted with CGI that makes its human actors seem detached from the animated worlds they’re supposed to inhabit. As the plot sends Alice racing from place to place, somehow she finds time to change costumes without explanation, while other characters somehow travel vast distances without explanation, especially in the let’s-wrap-it-up-as-fast-as-we-can conclusion. None of it makes much sense, even while the story proves annoyingly simplistic. At any rate, we can’t help but wish someone would travel back in time, see themselves, and put an end to this shameful CGI universe much earlier.

The movie’s overarching theme remains that time is short, and so we must make the most of it. But, thanks to this movie, time is a thief, stealing two unrecoverable hours from our lives. Alice Through the Looking Glass is even noisier, less enchanting, and more unnecessary than its predecessor—its sole redeeming quality being how it presents a self-reliant woman carving out a place for herself in the modern world. The filmmakers have no apparent understanding of Carroll, nor any devotion to the source material outside of a name-brand. The whole product exists to earn money, with colorful and computerized visuals attempting to compensate for the story’s complete lack of interesting characters or plot. From the story to the visual presentation, the entire thing feels offensively dumb and fabricated, and decidedly free of any element that might be considered fantastic.