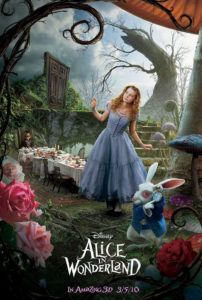 Tim Burton’s Alice in Wonderland had the same potential that his adaptation of Charlie and the Chocolate Factory had, and just like that film this one proves to be a complete disaster. The (commercially) morbid director is again helming an adaptation of yet another classic fairy tale, inscribing his own now-cliché visual style into the already unusual imagery of the story. Here the iconography of Lewis Carroll’s literary universe—even that of the classic animated version by Walt Disney Company—is mutated for a more audience-friendly-if-distorted tale, seemingly twisted in every detail yet accessible enough to deserve a PG rating.

In this version, the audience feels one step ahead of its hapless heroine Alice, here played by newcomer Mia Wasikowska. The character, now in her twenties, abandons her fiancé at the altar and returns to Wonderland as she did when she was a child. Except, Alice doesn’t quite remember her experience from childhood. Why? Because she thinks it was all just a nasty dream. The wacky characters in Wonderland all remember her, however; they’ve been waiting for her to return to Wonderland, because who else could stop the despotic Red Queen (Helena Bonham Carter) and her dreaded, dragon-like Jabberwocky (voice of Christopher Lee)? The result feels something like Steven Spielberg’s Peter Pan tale Hook—it isn’t exactly a reboot, it’s not exactly a sequel, and yet it’s a little bit of both.

Through the course of the film, Alice is befriended by a cavalcade of bizarre characters, all made slightly more freakish by Burton’s art direction. Take Alice’s cohort in this adventure, the Mad Hatter (Johnny Depp), who proves much saner than his name lets on after he recounts dramatic exploits of his past. He looks as though he fell into a vat of melted crayons, preteen girl makeup, and glitter. Or there’s Anne Hathaway as the ghostly White Queen, who looks a little too much like Burton’s former girlfriend Lisa Marie to ignore. Other characters are computerized creations voiced by notable actors: Alan Rickman is Absolem the Caterpillar; Michael Sheen is the White Rabbit; Stephen Fry is the charming Cheshire Cat. All the actors are underutilized, their talent forgone for special effects.

Even those unfamiliar with Carroll’s text will realize the movie gets it so incredibly wrong. Alice’s Adventures in Wonderland and Through the Looking Glass were episodic pieces of literature that were more exercises in word-turned-upside-down imagery, baffling logic, and nonsensical plays on words. What they were not was action-packed adventures. You won’t find the Mad Hatter in a swashbuckling swordfight or Alice clad in armor to fight a Jabberwocky. The same cannot be said for Burton’s film, written by Linda Woolverton. Burton seems to think he’s making a fantasy epic on par with The Lord of the Rings, particularly when the third act rolls around. And like all fantasies, there’s a lesson to be learned. The lesson Alice learns is that she wants to become a take-charge businesswoman, which for some of us will feel like a step backwards (particularly those of us familiar with Brazil).

Visually, the very cartoonish world is annoyingly and predictably Burton-esque, a look that outstayed its welcome back on The Corpse Bride, if not earlier. Ever since Burton’s name became a veritable brand at Hot Topic, with each new film his visual style seems less and less creative. Colors are muted and decrepit in tone, as if rotten and infected. Plants are contorted trees and warped. Everything looks undead, as though Wonderland was coming back to life after a nuclear holocaust. Characters are less absurd than they are just weird looking. These flourishes might have worked on Beetlejuice and Sleepy Hollow, but they feel overly implemented here.

The computer animation gives it all an ersatz edge. We never really believe the interactions between characters because most of them have been deformed by CGI. The Red Queen’s elongated, heart-shaped head; Tweedledee and Tweedledum as living versions of Mr. Potato Head;  the very appearance of the ever-creepy Crispin Glover as the Knave of Hearts.  What’s more, no one really looks as though they’re standing next to anyone else, and it’s rather distracting. And as for the 3-D projection, per usual the gimmick adds nothing to the movie. In fact, in this case it probably does more damage than good, since having to wear goofy glasses that darken the already dark picture won’t likely enhance the experience in any way. If you see the movie, see it in 2-D and maybe you’ll appreciate the visuals. Or not.

Nothing about Burton’s version of Carroll’s world feels right, including the performances. Somewhere along the line Burton and Company thought it would be a good idea to give the Mad Hatter a past. Instead of just being a jumbled madman, apparently he’s a noble hero who’s had a tragic history. Sound familiar? Typical Burton. Depp gives the role an unfocused energy, presenting the Hatter with alternating accents: one lispy, the other Scottish. It’s as if Burton backed the actor’s every instinctual whim and nuance without consideration of his movie. The character proves the completion of his uselessness when Depp begins dancing to a disco-pop beat in the final scenes. It’s possibly the worst performance (and role) in Depp’s career. Wasikowska isn’t much better, but she’s just playing it straight in a crowd of wackos. Bonham Carter’s Red Queen is entertaining, then again wasn’t she called “The Queen of Hearts” in the books? Frankly, the best performance comes from Stephen Fry’s voice as the Chesire Cat.

This version of Alice in Wonderland is what should have come after a more faithful Burton adaptation of Lewis Carroll’s book. The pointedly Burtonized world bears no resemblance to the source material, and we can’t imagine how it’s supposed to relate. It’s awkward on the level of Return to Oz or Superman Returns, in that the movie is sort of a sequel and yet it disregards everything that came before it. It plays like typical Burton family fare and lacks that macabre, R-rated edge that gives the director’s best work—like Ed Wood, Sleepy Hollow, and Sweeny Todd—its dynamic. Imagine Burton’s version of this tale in R-rated form, how well it might’ve worked had he been able to really let loose on the material. Instead, the outcome is loud and excessive and just plain awful, reminding us that there’s more to filmmaking than art design alone.