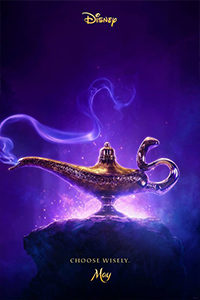 The image of a poverty-stricken “street rat” navigating the crowded, and fictional, thoroughfare of Agrabah, outwitting vendors and outmaneuvering palace guards, who chase after the clever sleight-of-hand artist and his pet monkey Abu, links the previous work of director Guy Ritchie with the 1992 animated classic, Aladdin. Ritchie has made a career out of forging new molds from recycled material. He revitalized the British gangster genre, turned Sherlock Holmes into a streetwise rascal, and made King Arthur a pickpocket and street fighter—all with a smattering of Dickensian setting and characterization. It’s no wonder Disney tapped Ritchie to helm the equally Dickensian Aladdin, the latest product in their recent outpouring of not-quite-live-action fare designed to hook younger generations with their valuable intellectual property. But given Ritchie’s track record, the screenplay he co-wrote with John August is disappointingly straightforward and not at all another of his gritty revisions. Instead, the director repeats every obligatory song from the original and hits every story beat as if following a mandatory checklist passed down by Disney overlords.

The familiar story of a “diamond in the ruff” who discovers a magic lamp, befriends a blue genie, stops an evil sorcerer, and wins the heart of a princess, Aladdin features Mena Massoud in the title role. But just like Disney’s original version, the Genie, immortalized by the late Robin Williams, remains the livelier centerpiece. Will Smith has the thankless task of trying to fill Williams’ shoes, but he and the rest of the cast are saddled with the limits of this so-called photoreal production—where garish CGI dominates over actual set-pieces, leaving every performance to feel wooden. In fact, most of Smith’s performance as the Genie appears to be rendered with motion-capture technology that strands the character in the Uncanny Valley. It sort of looks like Smith, but not exactly like him; his eyes are flat, and his mouth doesn’t move enough. The effect is alternately creepy and perplexing. Moreover, Smith doesn’t have the vocal range of Williams, making his performance muted by comparison. More convincing is Naomi Scott as Princess Jasmine, an impassioned feminist not so interested in marriage because she wants to replace her father, the Sultan (Navid Negahban).

Just as Disney’s recent remake of Dumbo featured Michael Keaton as a Trumpian capitalist with shady finances and crooked schemes, Aladdin’s villain, Jafar (Marwan Kenzari), bears uncanny similarities to the current U.S. president. The unsubtle parallels find Jafar and Trump agreeing on their border policies, their objectification of women (Jafar says Jasmine should be “seen and not heard”), and their desperate need for power. “Either you’re the most powerful man in the room or you’re nothing,” says the baddie, which might be a quote from The Art of the Deal. Sadly, Kenzari underplays the role, making Jafar far less cartoonish than a folktale villain should be. The film contrasts Jafar by building on Jasmine, whose character, as in the original, demonstrates her independent streak when she sneaks out of the palace to explore the city’s vibrant markets. Jasmine also has a new song, “Speechless,” about female empowerment, but it’s not a song that is rewarded with an equal sense of action by the character. Aladdin and the Genie still save the day. 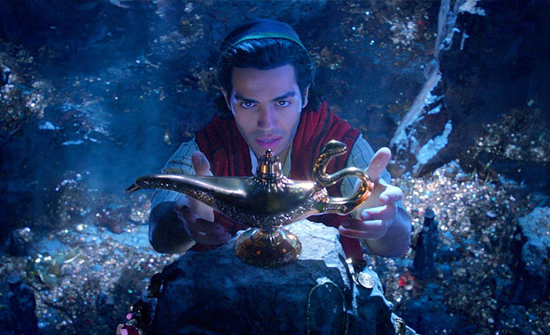 It might seem unfair to contrast this film to the original; however, it’s unavoidable for anyone familiar with the animated version. Ritchie and August follow the original so closely, regurgitating the same jokes, the same visual gags, and the same character journeys, that any departure from the text is rare. The major deviation consists of a romantic subplot between the Genie and Jasmine’s handmaid, Dalia (Nasim Pedrad), along with a framing device in which Smith plays a sailor who tells Aladdin’s story to his children. Otherwise, the viewer cannot help but feel disengaged by the stale versions of Alan Menken, Howard Ashman, and Tim Rice’s songs. Whereas the originals were performed with the dynamism of Robin Williams’ character-jumping voicework, Smith’s vaguely hip-hop versions seem airless. Only “A Whole New World” hits the mark. And along with Ritchie’s apparent inability to stage a visually compelling musical number, the performances here just don’t have the same level of energy as the 1992 version.

Where Ritchie’s talents should be apparent are scenes of Aladdin using parkour to evade pursuers in Agrabah (a setting steeped in a mild Orientalist perspective that would make Jean-Léon Gérôme proud). But the few chase scenes around the markets are hampered by the predominant CGI backdrops, creating a distinct separation between the foreground’s tangibility and the background’s artificiality. Frankly, the addictive Aladdin video game for Sega Genesis from 1993 was more entertaining. To be sure, everything about Aladdin feels dampened and uninspired, from Smith’s performance to the subdued musical scenes. Consider also how Iago, Jafar’s parrot, formerly voiced by Gilbert Gottfried as a sarcastic sidekick, has been turned into a personality-less bird with a few lines squawked by Alan Tudyk. It’s as though Ritchie has dialed the original’s energy meter down to a four, and yet the production runs more than a half-hour longer, and it cost nearly $200 million to make. So why does it play like a bad multi-million-dollar high school musical?

Audiences aren’t likely to share my dismissive feelings about Aladdin, as most of today’s viewers consume Disney’s money-motivated remakes with the same urgency as the studio’s Star Wars spinoffs or MCU products—only Pete’s Dragon (2016) has outdone its source. But at least Jedi Knights and Marvel superheroes (sometimes) have personality, whereas the characters of Ritchie’s film feel like they’re trying to replicate better performances than they could ever hope to achieve. Nevertheless, Disney’s photoreal reboots have a built-in audience of parents who grew up with the animated films, and who are now saddled with children that want to see the latest Disney spectacle. And while the kids might enjoy the bright color palette and special FX, the recognizable situations cannot distract from the lifelessness of everything onscreen, making the material suitable only for those unfamiliar with the original. If nothing else, it should inspire an older generation to introduce a younger generation to the animated version so they can discover what made the film a classic in the first place.