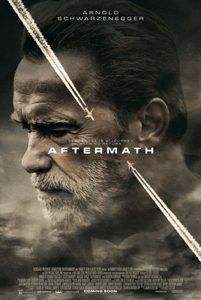 Aftermath is a drama starring Arnold Schwarzenegger whose primary mode is understatement. There are at least three things wrong with a film of that description. Putting the action hero into a tragedy based on real-life events, the 2002 mid-air collision of two passenger jets over Überlingen, Germany, seems like a recipe for disaster. Any film that relies on Schwarzenegger’s inability to communicate subtle emotion in scenes of little dialogue and profound, dramatic weight, inherently seems misguided. Of course, there’s always the potential that Schwarzenegger surprises everyone and delivers an acting breakthrough after years of one-note machine-gun-toting characters, as the right director could, in theory, draw out Ah-nuld’s hidden inner thespian. Unfortunately, director Elliot Lester isn’t up to the task of reshaping the actor from a shoot-em-up star to a dramatic performer.

Screenwriter Javier Gullón blends the odd trend of recent airline disaster films (Flight, Sully) with a revenge story, which in itself is a workable concept. However, the underwritten, slow-burning story relies on its actors and director to fill in the blanks with unscripted, expressive flourishes. Aftermath is intent on avoiding what would otherwise be the most fascinating and involving aspects of the story, perhaps as a consequence of the slim budget, perhaps because of the insufficient script. The film sidesteps showing the plane crash, funerals, and most major confrontations; instead, it resolves to languish in the inner woes of characters, though most of the events that affect their lives occur offscreen.

Schwarzenegger plays Roman, a construction worker whose wife, daughter, and unborn grandchild will soon arrive in the U.S. for the first time. Due to an air traffic control error, his family doesn’t make it; two planes collide in the sky and everyone on board perishes. Rather than depict the crash or flaming wreckage, the viewer sees only two triangular blimps on a digital board moving toward one another, which is a delicate way of handling a major event. After that, Jake (Scoot McNairy), the controller held unduly responsible by the airline and families of the victims, remains in a near state of catatonia, unable to communicate with his wife (Maggie Grace, in a rare non-teenager role) or son (Judah Nelson) until he’s forced to leave his home, change his name, and consider suicide.

Looking downright Hellenistic, Schwarzenegger sports a scraggly beard and physique of, well, a former body-builder nearing the age of seventy. He lumbers through every scene, his head bowed down in bland, dialogue-less scenes where he tries to capture the look of rumination and ruination. Roman spends almost the entire film trying to conjure an apology from the airline, and at the same time attempts to find Jake with intent to murder him. Lester injects periodic shots of planes streaming through the sky, as if to remind the audience in the most unsubtle of ways what the impetus of the entire film was. So while the characters and storytelling are meant to operate in minimal dramatic notes, Lester’s treatment is by contrast heavy-handed as can be.

The film’s reliance on understatement throughout means that not much happens besides actors acting as though they’re thinking about how they feel. McNairy delivers a thorough and empathetic portrayal of overwhelming guilt, but Schwarzenegger has been grossly miscast, just as he was in 2015’s Maggie, another small-budget production that expected a three-dimensional performance from the actor-turned-governor-turned-actor. As if the uninvolving story and lack of onscreen confrontation weren’t enough, Aftermath builds to a predictable climax with an obvious turn completely devoid of dramatic heft, as clumsy and belabored as the entire film (thoughts of Paul Haggis’ Crash come to mind). If the drama evokes any emotion at all, it’s frustration that, aside from McNairy’s turn, the experience remains incapable of evoking any genuine emotion.