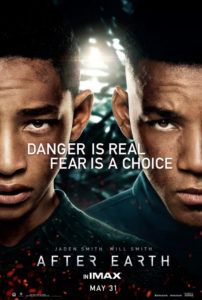 What does it say about our society that every few months, a major blockbuster about a dystopian future hits theaters? Certainly not that we’re optimistic about the fate of our planet. And what does it say about us that these mega-budget films aren’t drawing the types of crowds the filmmakers hoped for? Perhaps that we’re tired of seeing superstar actors attempt to carry a special FX extravaganza all by their lonesome? Just like Oblivion earlier this year, After Earth is another tale about an abandoned planet Earth and a few isolated characters trying to survive on its surface. But where Tom Cruise battled aliens on an irradiated Earth’s surface to protect precious water, Will Smith and his son Jaden find themselves back on an Earth long after humanity abandoned it, only to find it’s now thriving with dangerous wildlife that “has evolved to kill humans.” Regardless of the potential here, a neutral, lifeless tone prevails over every aspect, from the direction to the acting to the special FX, but especially the dull script by M. Night Shyamalan and Gary Whitta.

Based on a story by star Will Smith, After Earth is set more than 1,000 years in the future. In a silly prologue that feels stripped from Starship Troopers (except without the flippant humor), we learn humans abandoned Earth a millennia ago after exhausting its resources. Once we resettled on a planet called Nova Prime, war broke out with an alien species who genetically engineered deadly creatures called “Ursa” to destroy us. Slimy, giant-sized insectoid things with a nasty temper, Ursa see humans by almost literally smelling our fear through our fear-based pheromones. Supreme space general—or whatever—Cypher Kaige (Smith) has learned to evade Ursa by “ghosting,” a fancy way of saying he shows no fear and has led humanity to thrive in the alien war. In addition to fear, Cypher also doesn’t show much emotion, much to the dismay of his all-too-understanding wife Faia (Sophie Okonedo) and their son Kitai (Jaden Smith), who wants his vacant father’s respect so much he begs his commanding officer at the Ranger Academy to promote him.

Encouraged by Faia to take the cadet Kitai along on a routine mission, Cypher and his son end up being the sole survivors of a crash landing on where else but Earth. With both of Cypher’s legs broken during impact, the inexperienced Kitai must voyage 100 kilometers across deadly terrain to recover a transmitter, send a rescue beacon, and save his father. The screenplay is careful to outline the stakes in a manner so offensively clear-cut that audiences cannot help predict each of the film’s annoyingly obvious themes and plot elements. Before Kitai sets out, Cypher instructs him to listen carefully to each order; he explains how Kitai has a limited number of breathing enhancers, warns him of the planet’s shifting temperatures, and tells him there may be an Ursa hunting him. As if in sequence, Kitai disobeys orders, breaks his breathing enhancers, finds himself trapped in a sudden freeze-over, and finally battles an Ursa (a fight for Jaden that mirrors his father’s brawl with a giant bug in Men in Black). All the while, Cypher watches helplessly on a screen from cameras embedded into his son’s suit.

Throughout the film, Kitai resents his father for his stern emotional unavailability, but the boy quickly discovers a way to understand his father from another perspective. The notion of a parent protecting a child becomes palpable when Kitai helps a massive bird of prey protect its chicks from danger, an allusion to Cypher so blatant that the audience cannot help but collectively roll their eyes. On a related note, the CGI used to realize this bird creature, as well as the film’s other animals (baboons, hogs, wild cats, etc.), looks more attuned to a SyFy Channel Original than a $130-million budgeted summer tentpole. After epic disasters such as The Last Airbender, it’s any wonder why producer and star Will Smith trusted Shyamalan with that kind of budget. And after seeing the Oscar-winning, photo-real creations in Life of Pi, watching After Earth’s display of muddled CG animals is nothing short of pathetic.

Although top-billed, the elder Smith spends much of the film on the sidelines, catering to the future career of his son. But, as demonstrated before (in The Karate Kid remake), the acting gene hasn’t been passed down to young Jaden. Jaden is completely unable to carry our interest or sympathy; he’s out of his depth here, forcing emotional breakdowns and breakthroughs to unintentionally funny extremes of overacting. Meanwhile, Will remains cold-tempered and hardly affecting, especially under the characters’ futurespeak—an odd inflection that sounds somewhere between an Asian and British accent. Furthermore, the character of Kitai isn’t very likable. He spends the film’s first three-quarters acting like an over-privileged brat, and one cannot help but feel like the character isn’t too far from the real thing. After all, it’s doubtful that Jaden Smith would have been cast if auditioning for the role; he was cast because one of the biggest blockbuster performers in the world wanted to make a movie with his son.

Running just 90 minutes (with an additional ten for end credits), After Earth still feels overlong. Kitai’s journey across dangerous terrain is protracted and devoid of danger or suspense, making every step of the voyage feel like a slog. This is strange for such an intriguing concept—the vulnerable Kitai on his first adventure and the warrior Cypher unable to do anything but watch. But Shyamalan entirely misses an opportunity to play with Rear Window-brand suspense, just as he renders the “suit cam” effect inconsistently used. At times, Cypher watches Kitai’s journey from an angle that couldn’t possibly come from the cameras on the suit, making us wonder how he’s seeing the action. This is another in a laundry list of distracting technical and narrative low points in After Earth, a film whose transparent attempt to engineer Jaden Smith into an action hero fails in disastrous proportions. Such mundane and clumsy storytelling is rarely seen in a production this size, which will no doubt prove a financial bomb; but when you’re Will Smith, no doubt you can afford it.