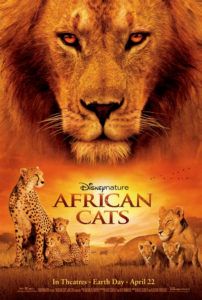 In the realm of cutesy nature documentaries, African Cats is a pretty good one. Disneynature returns for their third annual Earth Day event, charming audiences with images of gorgeous animal life, and making a substantial donation from the opening week’s box-office receipts to a worthy cause. Narrated with the over-emphatic stylings of Samuel L. Jackson, the doc follows the development of two families—one cheetah, the other lion—on a Kenyan wildlife preserve. Coming close to anthropomorphization, the schmaltzy prose manufactures an almost melodramatic narrative from basic Circle of Life notions, with a scene or two straight out of The Lion King. But not even these mushy rampant Disney-isms can spoil the marvel one feels watching such stunning footage.

Disneynature told larger scale family-based stories with their previous Earth Day releases, Earth and Oceans, and therein featured material driven by the wonder in Nature itself. And while those docs contained a range of episodes about a family of elephants, polar bears, humpback whales, and so forth, here their intent is more focused. Human names are given to the wildlife onscreen, so we might follow their progress with deep emotional involvement. In one respect, this helps moviegoers identify that animals are not merely wild beasts, but thinking and feeling creatures driven not merely by instinct, but by rawer versions of human emotions; in another respect, it’s very manipulative and at times eye-rollingly corny. Jackson’s voice only enhances the experience, conveying a greater sense of energy than the usually flat narration we’ve come to expect from typical nature documentaries.

Cameramen track cheetah mother Sita, whose five cubs are defenseless without her. Leading a solitary lifestyle, Sita exists without the protection of a pack or even mate. Her story is the most involving and ultimately the most tragic, as she faces hyenas, lions, and other cheetahs after her cubs. Meanwhile, a veteran lioness mother, Layla, struggles with injuries but bravely defends her cub, Mara. Along with several sisters, Layla’s pride is defended by Fang, a crusty beast with a cracked tooth and matted fur. One of the film’s most exciting moments occurs when Fang protects them near a dangerous river by scaring-off crocodiles in a face-to-face encounter. Jackson’s narration creates heroes and villains of the Savanna, with rival lion male Kali serving as the baddie bent on domination of Fang’s land. But the narration washes over the sexual politics of the land, such as when Kali overtakes Fang’s pride and then—somehow—months later has cubs with Fang’s former mates.

Of course, directors Keith Scholey and Alastair Fothergill cut away at just the right moments to preserve their G-rating. When Sita runs down a gazelle, you can be sure we won’t see her bite into her meal’s jugular; indeed, nor will you see the lion pride enjoying their zebra carcass. Themes of parenthood prevail instead, with the relationships between mother and child at the center. Here you find the best argument that animals aren’t just instinctual creatures, but feeling ones capable of affection and love and learning. What we see isn’t solely a parental protection instinct, but evidence of warmth and care. If only the main thesis of the film was to anthropomorphize animals to this effect, which can only help wildlife and nature preservation, then the film might offer something more valuable than pretty pictures.

But don’t expect Disneynature’s trend of sentimentalizing animals in their nature documentaries to end anytime soon. Before African Cats, you’re bound to see a trailer for their next effort, Chimpanzee, what looks to be a touching tale about a baby chimp adopted by an older male. With each new picture, Disneynature reduces their scope, refines their narrative, and inches away from truly educational documentary work. Alas, if this approach draws more viewers and sells more tickets in the first week of business, then it only helps the film’s cause and respective charity. Oversimplified and geared for kiddies though it may be, the result is wholly watchable, incredible to behold, and bound to tug a few heartstrings along the way.